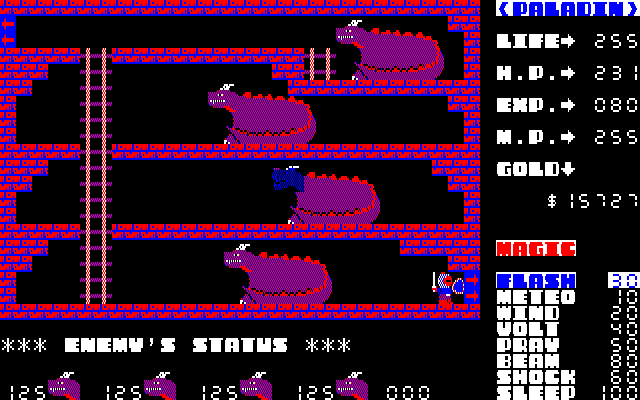 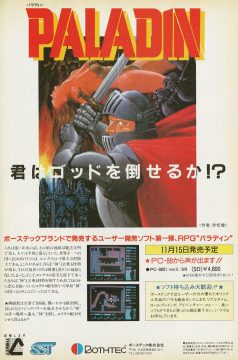 Paladin (or “The Paladin“, as written in-game) is an early action-RPG released by Bothtec in 1985. Various Japanese sites indicate that Falcom’s Xanadu was extremely popular at the time, having been covered in magazine’s strategy sections for months on end, which likely influenced this title to some extent. However, it’s far from a ripoff – in fact, it’s quite a bit friendlier, if mostly because it’s more linear, and there’s no karma system to screw you over. 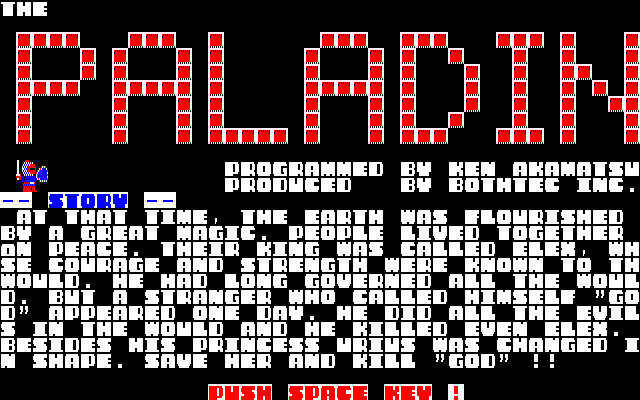 When you boot up the game, the first thing you here is a scratchy, digitized voice clip from someone proclaiming to be God, who dares you to rescue the kidnapped princess. This leads to the title screen, which actually spells out the entirety of the story in jumbled but understandable English. The catchcopy on the advertisement actually says “Can you defeat God!?” Curiously, “God” is written in katakana, but in the voice clip he calls himself “kami” (Japanese for “god”, of course). 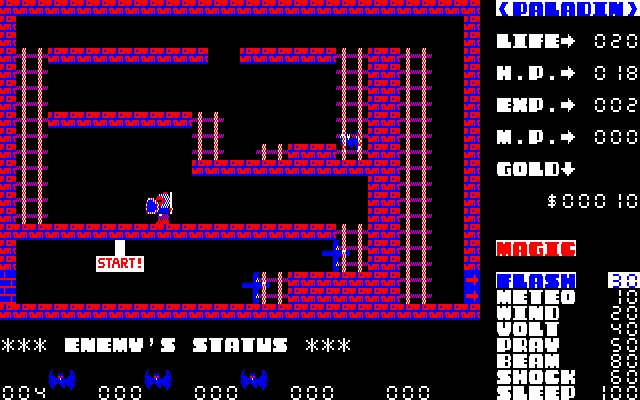 This is the first area. Each stage is presented as a single screen, with both an entrance and an exit (except this one, since it’s the initial level, only has an exit.) It uses a simple bump system for melee combat, though you can cycle through your magic spells with the Control key, and cast them with the Tab key. You technically don’t have to kill all of the enemies to proceed, but they will give you experience and cash. The F1, F2, and F3 keys will use restorative items. These are actually based on real-life vitamin drinks: Oronamin A, Lipovitan B, and Alinamin C. 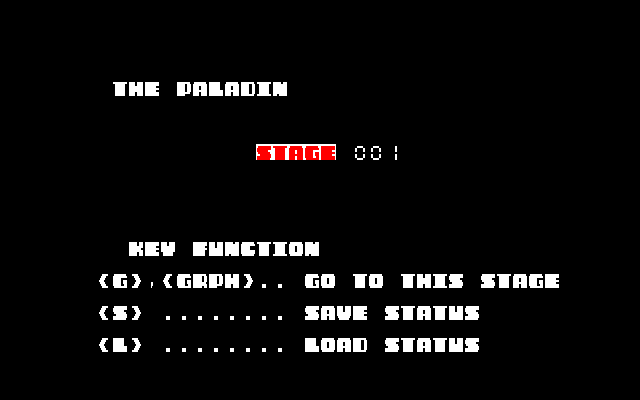 There are 100 screens in the game. This is shown at the beginning, and in between stages, allowing you to save or reload your game. This screen seems to imply that you can choose your stage, but no – if you want to visit previous levels, you have to walk back screen by screen (though there are a few warp tiles). 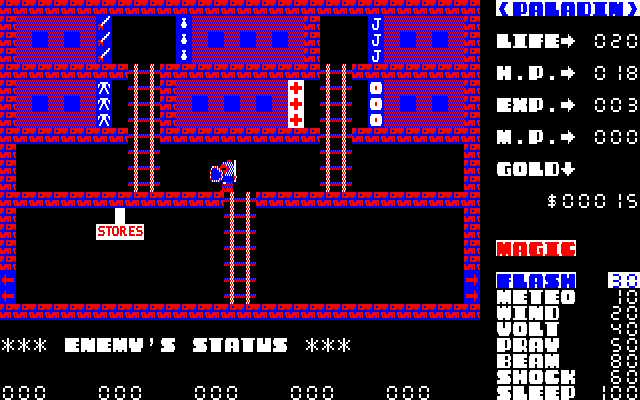 The second screen has a bunch of shops. On the left side is an item, sword, and armor shop. On the left is a hospital, but the other two are less clear. The one marked “J” stands for “jouhou”, which means “news/gossip”. Here you get hints and other backstory stuff, the kind you’d normally find in towns and bars in other RPGs. The only beneath that is a gambling house, to try to earn more money. 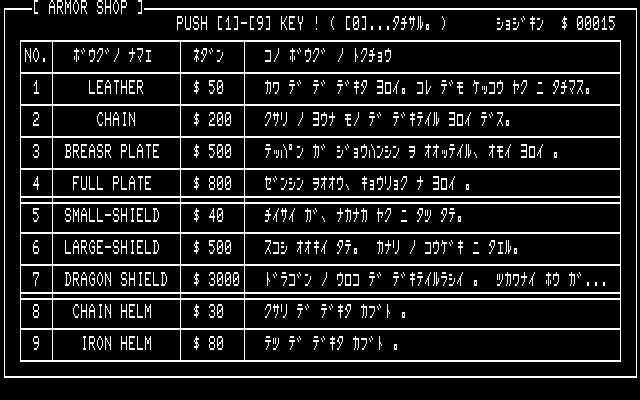 Here’s the armor shop. The equipment names are in English but the descriptions are not. But it’s still pretty easy to figure out. 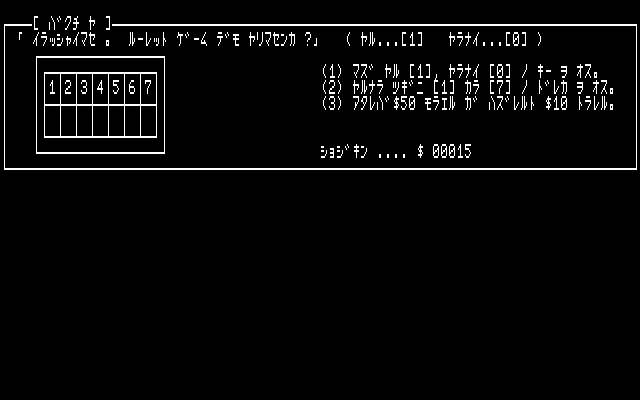 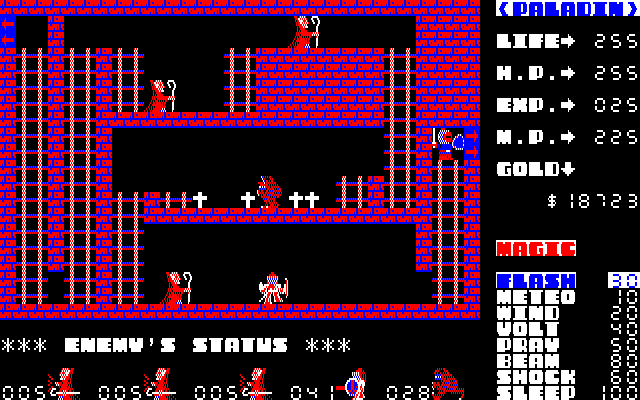 The enemies get much more aggressive than just the bats you encounter early on. Note that there’s a maximum of five enemies on a screen, whose HP is helpfully displayed on the bottom of the screen. 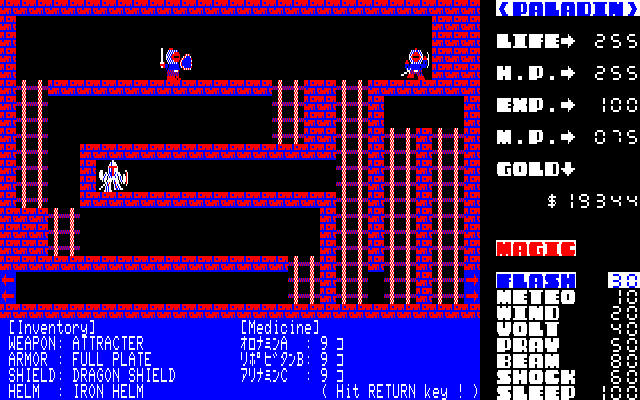 When you see a mirror, watch out! A duplicate of your knight will appear and chase after you. 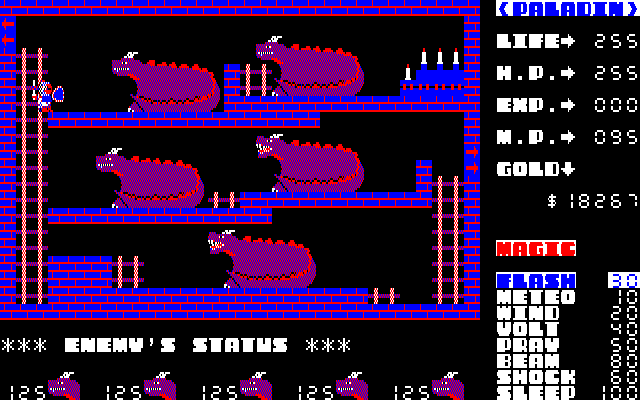 Here’s a screen filled with dragons. If you cross by their mouths, they breathe fire at you. 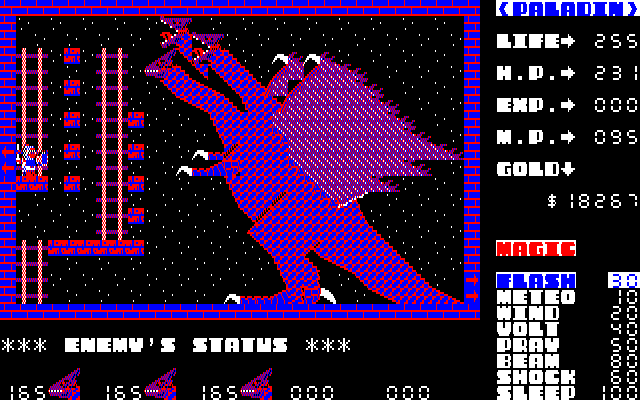 And here’s the mega three headed dragon at stage 99! I’m actually not sure if you can kill these dragons, because in the video walkthroughs, they just run past him. They die anyway when you kill the last boss (their heads are replaced with crosses, like the gravestone markers when you kill regular enemies). 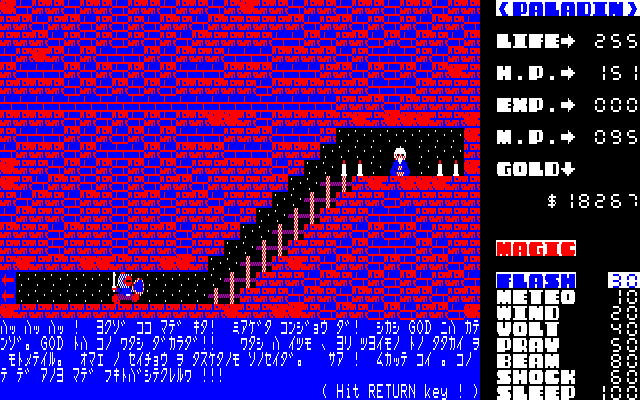 Finally, stage 100 with the fight against God himself. 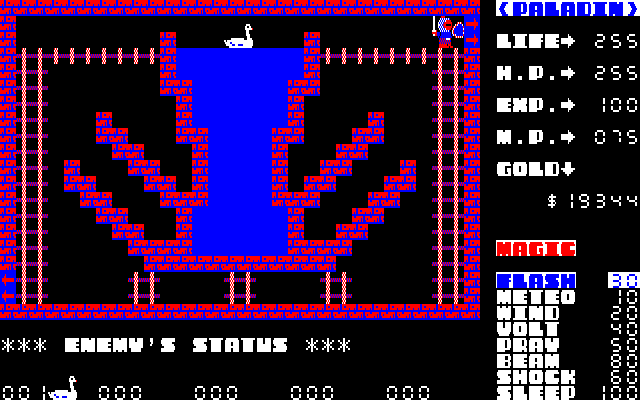 The game doesn’t end when you kill God – after all, technically the goal is to rescue the princess. In one of the earlier stages (somewhere in the mid-50s), you find this serene screen with a swan. That swan is actually the princess – when you’ve beaten the final boss, you backtrack here and can then help her regain her human form. 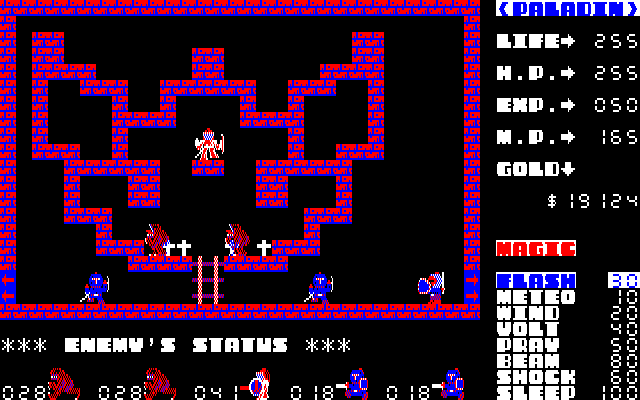 Paladin isn’t too bad a game! Sure, as always, the combat is clumsy, and much of the game simply involves finding/buying the proper equipment and managing your money but it’s definitely less obtuse than the typical computer RPG of the era. Plus, it’s actually ahead of its time in a few ways. Dragon Quest III is the game that standardized a casino as a location in so many JRPGs, but it was featured here years earlier. Heck, even the plot to kill God, a popular JRPG trope, makes an appearance too! Plus the digitized speech at the beginning (and when you save the princess at the end) is pretty impressive. 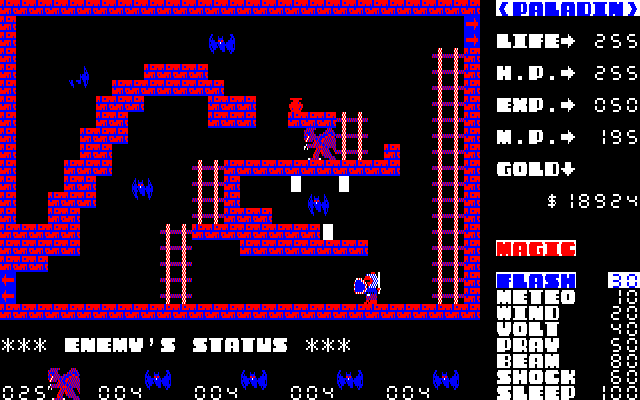 One final, interesting note about Paladin – it was developed by Ken Akamatsu, who would later become a world famous manga author thanks to his series Love Hina and Negima! He was a member of his high school’s micro computer club and developed this game when he was 17/18, after which it was picked up by Bothtec for publication.