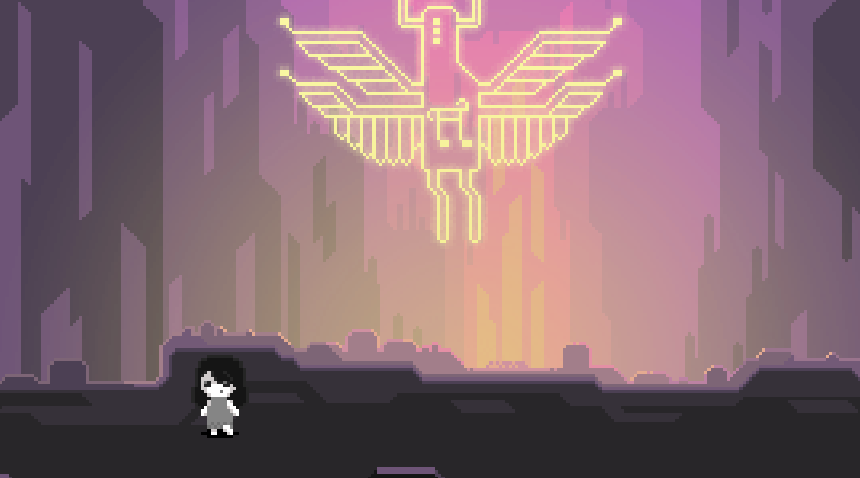 Storybird’s Finding Teddy is a strange little game. Where most indie games have gotten attention for experimentation or inventive mechanics that outshine poor presentation budgets, Finding Teddy is a game that has the following it does mainly because of its presentation and what it does with it. This is in despite of the game proper being a bare bones experience. It fancies itself a point and click adventure, but it doesn’t really follow the usual formula very closely. There are puzzles and deaths, but Finding Teddy aims not to thrill or entertain, but to mesmerize in some fashion. 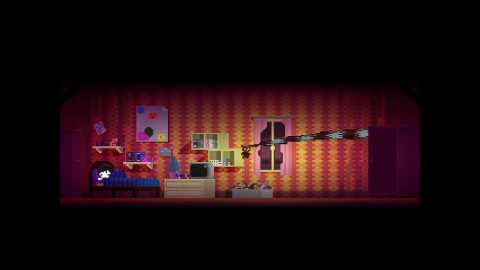 The game goes with an Alice in Wonderland set-up, with a young girl going into a bizarre fantasy world to get back her teddy bear, stolen by a frightening monster. Shortly upon arriving into this mythical place, you can get this girl squashed by a sad gray creature with a long neck, or eaten by a giant slime monster. Or most anything you come across, really. Bloody everything wants to eat this child. The most common possible death is vore, no matter where you are. It’s both messed up and darkly amusing, because it just happens so matter of factually. A lot of hard work went into coming up with and implementing ways for a child to be a snack for adorable sprite creatures. There are so many ways for this child to be devoured that the effort put into all of these deaths almost becomes perversely impressive.

The game is pretty simple to play. Just click on the path you want to follow, and you’ll go to a new screen. On every screen, you can click around to find something you can pick up or interact with, though interacting with anything without an item usually results in a horrifically funny death. In order to use an item and hopefully avoid being brunch, just click on the girl to bring up her inventory. These puzzles are simple enough to figure out, so much so that it’s hard to call them puzzles. The only real puzzle comes in the form of musical notes. Many different creatures in the world sing a tune, and learning to play those tunes with your note sheet at top is important. The trick is that the notes are not normal musical notes, but align to the English alphabet. Once you figure this out, you just need to pay attention to what a creature is singing and either use their message elsewhere, or respond with a message of your own. 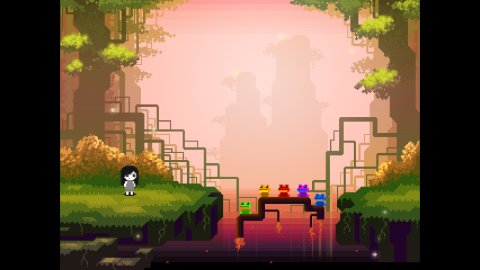 The problem is that this is the game’s only real puzzle. Everything else is find the thing and use it on thing to proceed. Once you understand the alphabet connection (which is only tricky because the H note you discover looks like a weird, gangly capital I), it’s just a matter of figuring out when you need to sing and what. Finding Teddy isn’t a game that’s going to test your brain power, and it’s very short at just about an hour or over.

Finding Teddy really manages to create a memorable world through the absolutely gorgeous sprite work and how it frames its premise. With the simplistic mechanics, you’re left completely powerless, but not in a survival horror sense. It’s a game about navigating a strange, dreamlike world as a little girl. You get smacked with bizarre deaths, but the screen just resets to however it was before said death and allows you to continue on as normal. The normal rules don’t apply, so exploring feels like genuine exploring because of all the strange parts that create this place, avoiding frustration with a lack of punishing the player for trying out different actions. There are mystical machines, giant monsters with unexpected intelligence, odd artifacts, and an excellent use of color and contrast to make a moody atmosphere. With the minimalist score, Finding Teddy becomes one of those games you can easily lose yourself in for awhile, experience something you can’t really experience anywhere else. It has genuine novelty and craft behind it, even if it’s not terribly interesting on the merits of your average point and click. It’s simply a lovely mixture of cute and reflective, a game that leaves an impression. That alone makes it work a look, if you like that sort of thing. 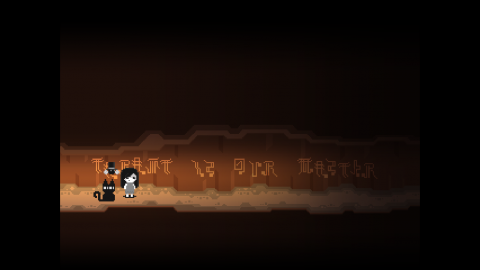 But here’s the strangest part. The sequel to Finding Teddy is absolutely nothing like Finding Teddy. Finding Teddy II, renamed later to Chronicles of Teddy, cast the girl as a teen, and with her change in interests, the entire world and mechanical design is overhauled into …a Zelda II clone.