In 1991, the Super Nintendo had arrived, and the regular NES was rather quickly forgotten by most publishers. Not content in forgetting their loyal audience, Capcom created a completely new, special entry of the series, known as Mighty Final Fight. The stumpy super-deformed character designs worked fairly well on the technically limited NES (despite some flicker), and the game actually played almost exactly like its older brother, despite the different proportions. 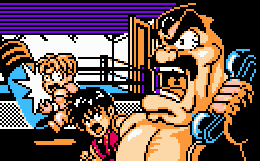 Mighty Final Fight actually lets you play as all three primary characters, although it’s still only one player. Weapons are no longer available, but you gain experience when you beat enemies, leading to a longer life bar. All of the enemies will be familiar, though the game no longer gives their name by their health bar. At the end, you get to fight Belgar as a cyborg. And in an idea later stolen by Final Fight One for the GBA, the heroes actually converse with bosses before battle, often in a rather humorous manner. There are five levels, and they aren’t based on any other game, though it has lots of typical areas, like slum streets, parks, bars, and the same type of freight elevator seen in so many beat-em-ups. The soundtrack is all new too, recalling something like Mega Man rather than other Final Fight games. Cryptically, this is the only version on a Nintendo platform where the female enemies were left unaltered. 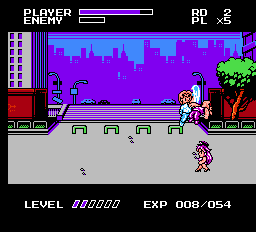 While it’s not the best beat-em-up on the NES – that title still goes to River City Ransom – it’s still quite good. This was featured on the GBA title Capcom Classics Mini-Mix, released in 2006. It’s a straight emulation with no enhancements. 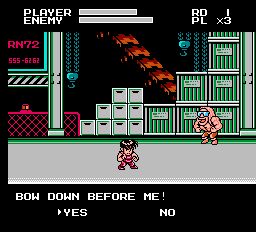