This is more like it – Final Fight 3 (dubbed Final Fight Tough in Japan) is another SNES sequel that, this time, actually improves on the formula. A new criminal organization called Skull Cross Gang is responsible for riots in Metro City, so Haggar – now sporting a badass ponytail – and Guy are back to save the day. They get support from lady cop Lucia and some spiky haired fellow named Dean, who’s got a past with Skull Cross and who can electrocute people for some reason.

It’s the usual “walk right, smash stuff” formula, but given a kick in the arse – for the first time, you can not only dash but execute running attacks. Not only does this make the game play faster, but it’s also a lot smoother as well. The graphics style has gotten an overhaul, and while the music selection is slim, the first level song is awesome. There’s also special moves that can be executed with Street Fighter-style motions, and a power bar that lets you unleash super moves when charged up. 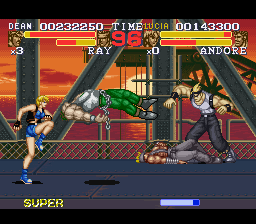 Final Fight 3 also introduces the “Auto 2P Play” mode to the series, where the CPU can take over for the second player. It’s a neat option if you really can’t find a second player, but the partner is not too intelligent. A real human player is always the better choice, that’s for sure. The CPU partners also cannot use continues, so as soon as all their lives are depleted once, you’re on your own again.

The bonus rounds have gotten even more crazy. This time, you have to destroy a bulldozer before it pushes you down a pier, and destroy a super computer at the end of a long tunnel of rolling barrels. There’s even a few alternate levels and secret rooms to find by destroying parts of the environment. These allow to skip some parts of the game, and also have an impact on the ending sequence, as does the selected difficulty level – in short, this is one of the best side-scrolling beat-em-ups out there. This was one of Capcom’s last SNES releases, and while it’s rather hard to find in America, that’s nothing compared to Japan, where copies of Final Fight Tough seem to be extremely rare. 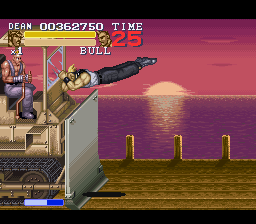