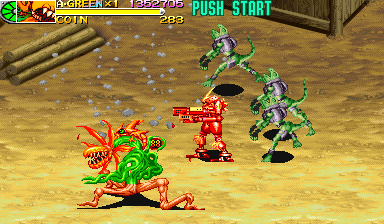 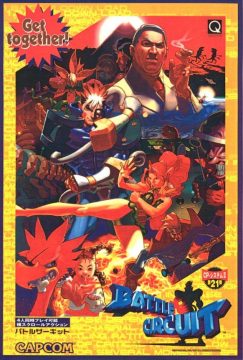 Battle Circuit is an arcade side-scrolling beat-em-up developed by Capcom for one to four players, released in Europe and Japan in 1997. Capcom was the king of the genre in the 90s, beginning with Final Fight in 1989 and continuing with such classics as The Punisher, Captain Commando, The King of Dragons, Cadillacs and Dinosaurs, Warriors of Fate, Alien vs. Predator, and two Dungeons and Dragons titles, among others. However, Battle Circuit would be the last of its type released in arcades by the company.

It’s also one of the best. Picking one of five super-powered space-bounty hunters, your aim is to rid the 20XX city of Neo Koba from interstellar criminals. Shortly after completing your first assignment, you have to obtain a computer disc named Shiva from the Delete Gang, and the plot thickens from there. Special mention must go to the writing, which has a fun, Saturday morning cartoon atmosphere, witty dialogue, and never takes itself all that seriously. 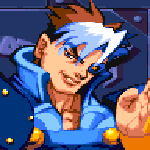 A cyborg bounty hunter who has a variety of electric-based attacks. 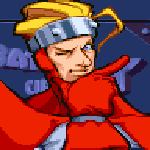 Another bounty hunter, Silver can morph his body like Mister Fantastic from Fantastic Four, and shoot ice. His powers will consume him if he loses control. 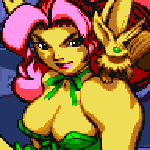 Accompanied by Fin the fox, Iris is a part-time feral fashion model, full-time bounty hunter, who has a nifty whip for long-range attacks. 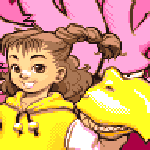 Ridden by her friend Pola, Pinky is the world’s only flying ostrich. 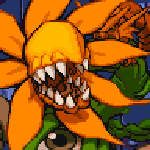 A mysterious creature, whose origin and reasons for bounty hunting are unknown. 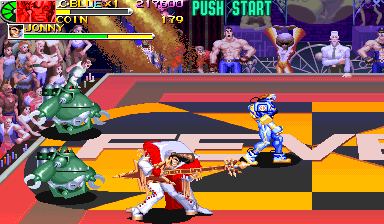 Each player character comes with a special buff. Cyber Blue is a cyborg who is the most balanced, comes with a power buff, and is a great choice for new players. Captain Silver can morph his body like Mister Fantastic from Fantastic Four, shoot ice, and has a boost to defense. Yellow Iris, accompanied by Fin the fox, is a feral fashion model who excels at speed, and has a nifty whip for long-range attacks. Rounding out the cast are the eye-patch wearing flying Pink Ostrich, who is best in the air, and is the practitioner of the deadly Death Blow; and Alien Green, who is the powerhouse of the quintet and also boasts increased vitality, with the caveat that it cannot jump and is slower.

The graphics are the typically distinctive Capcom character designs you’d expect, albeit with a manga twist. They look good in motion too, with plenty of frames of animation. Unfortunately, while many of the backgrounds brim with life, some are very drab. The enemy designs are varied, and see you fighting with everything from lizard men, to stocky little robots, android sentries, and large Hulk-like creatures. Each standard enemy comes in multiple variations marked by color, with the sentries upgrading from laser guns to flamethrowers, and the Hulk creatures, when defeated, rising again as dangerous zombies. They’re thrown at you in enough different configurations (often alongside plentiful mid and main bosses) that they only lose appeal towards the very end of the game. 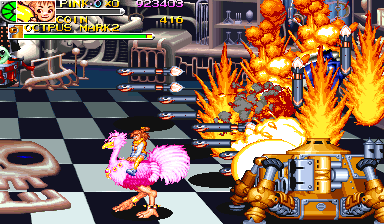 There’s one button for jumping, one for attacking, and pressing one after the other unleashes a flying strike. Double tapping a direction starts you into a sprint, and pressing the attack button during this time launches you into a dash attack. It’s possible to get up close and personal too, with throws and slams when near an enemy. In addition, each character can access super moves by inputting Street Fighter-esque inputs, with more being available for purchase from the in-game shop. Pressing both buttons at the same time initiates a special attack which saps your lifebar, and two players performing the action at the same time creates an even more potent version.

Playing the game feels great – everything is fast and responsive, and the thrill of hitting attacks chained into specials and supers never gets old. Crucially, you almost always feel that any mistakes are down to you rather than the game, and it’s possible to get so good that you can walk through most encounters without a scratch. That’s not to say Battle Circuit is a pushover; there’s challenge here, and you need to think about crowd control and tactics on the fly if you’re to succeed. You have an extendable lifebar, as do enemies, but bosses can sometimes have multiple. Thankfully, scoring enough points will eventually grant you an extra life. 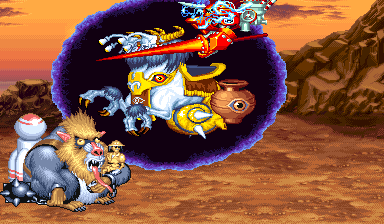 There are seven stages, with an optional eighth. You’re immediately thrown into the action with 60 seconds to defuse a bomb on a space station, with enemies coming at you left and right. This smartly acts as the tutorial, and introduces you to the various collectibles: the Battle Download Gauge Recovery, which gives a power-up to you and your allies if you press both buttons in midair; foodstuffs, which replenish health; coins, used in the shop between levels; and the Money Maker Unit, which turns all enemies onscreen into coins. From there, it’s on to a disco; a midair city that turns briefly turns into a fun side-scrolling, coin-collecting shoot-em-up on the way to the beach; a waterfall and into an enemy base in a cave; a prison camp; a motorway showdown with some bikers that is reminiscent of Akira, juxtaposed with an old Japanese village; and then to the Neo Andes mountains, where you find the enemies’ main lair, take on the final boss, and shut down Shiva for good.

That’s unless one character has attained 3,200,000 points, in which case after defeating the boss here, you’ll have a choice: shut down Shiva, or fight the Master Program to get the real ending (and a shedload of points, to boot!). The Program, a Japanese kabuki demon astride a giant ice dragon, is very tough, and one of the few times the game feels unfair, with him able to hit you with attacks for off-screen and swoop in out of nowhere. The same can be said of the boss of the cave level, a four legged robot that’s the brainchild of the normally hilarious Doctor Saturn. Apart from these, the rest of the bosses are a lot of fun, from an Elvis impersonator, to demon dominatrices, a man (charmingly called ‘Dave’) in a robot scorpion wheelchair, a giant ape and wildlife keeper girlfriend, a mecha-samurai riding a two-headed slug, and more. If anything, the final boss (or penultimate, if you go against Master Program), a king who spews bombs out of his butt, is a letdown in comparison. Either way, the credits are worth sticking around for. 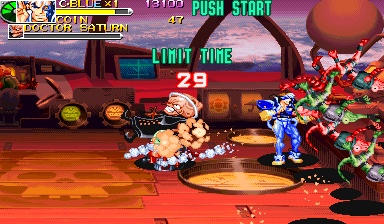 In between stages you can spend any coins collected to upgrade your character. These range from new super and special attacks to health upgrades and the like. This adds another layer of strategy; do you buy new standard attacks now, or save for that super-duper (and much more expensive) special attack? You’re unlikely to have enough for everything until later on, and not all upgrades carry over when swapping characters mid-game.

The music was composed by Shun Nishigaki, who had previously put together the tunes for Cadillacs and Dinosaurs, X-Men: Children of the Atom, and Street Fighter Alpha: Warrior’s Dreams, among many others, and would later create the soundtrack for Resident Evil 2. It provides a good mixture of electronic and pop instrumentals, and was popular enough to receive a vinyl release in Japan. The sound effects are crunchy and satisfying, and add to the frantic combat. The second part of stage 6 features music that would later be used as the basis for the amusement park stage in Marvel vs Capcom 2.

Battle Circuit was finally released worldwide in 2018 as part of the Capcom Beat ‘Em Up Bundle for Xbox One, PlayStation 4, and Nintendo Switch, with a later release on PC. Released digitally, with other games including Final Fight, Captain Commando, The King of Dragons, Knights of the Round, Warriors of Fate, and Armored Warriors, the bundle contains an extensive range of original design documents. You can choose between the English or Japanese ROM (only featuring minor text changes) of Battle Circuit, as well as adjust the number of players, difficulty, life bonus, and number of lives.

There have also been some cameo appearances through the years, including Cyber Blue being in Project X Zone 2, Yellow Iris being an alternate skin for Felicia in Ultimate Marvel vs Capcom 3, and both being seen dancing at the end of Capcom Fighting Evolution.