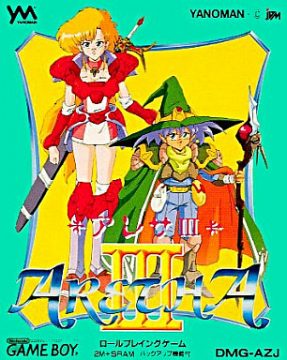 Aretha III begins once again in Halo Halo Town. Materia is now 20 years old and still taking care of Floyd, who is still bed-ridden with his ever depraved sense of humor. She sets out once again to find Doll, who ventured out to hone his skills. It seems like another does of Aretha II, but fortunately that’s where the similarities end. During her journey, Materia comes to the realization that the ring, as bestowed upon by the late King Leparton, was missing from its pedestal in Aretha Temple. Once she rendezvous with Doll, Ben Marxist appears and advises them to seek the ring in the past. Therefore, he casts a powerful magic spell that sends the pair back twenty years in time.

The third installment offers a some new perks. The maximum party members has now increased to four instead of three. The monsters in battle have a small degree of animation, which was something that even many Super Nintendo RPGs did not have, much less a Game Boy RPG. The “technical attack” aspect from Aretha II reprises its role in battle, except this time, the chance of performing it has increased significantly.

The game also continues the series’ sub events, which include the ever-quirky banter between the main characters. The towns people often display jokes, some even shamelessly advertising other games published by Yanoman, including the Aretha series on the Super Famicom, and a few other games like “Song Master” and “Penta Dragon.” One NPC even goes as far as to remind the player that there are three Aretha games for the Game Boy.

However, even though the story continues from the first two games, inconsistencies plague this game. The first and most notable one how Halo Halo Town has undergone a complete makeover. Gone are the walls and paved streets from the predecessors. Instead, the town is larger with the buildings and townspeople significantly spaced apart. The town now has a more rural look, and while it does look better, the houses are spaced too far apart with little to nothing in between. Thankfully, the player has the option to change the walking speed to traverse the town in a timely manner.

The battle still copies the Dragon Quest formula, but has become even more unbalanced than its predecessor. First off, the enemies can also perform technical attacks, allowing even a weak random encounter to one-shot kill one of your characters in a cheap fashion. On the other hand, there is an attack called “Death Attack.” This technical attack was in the previous game, and it allows the character to instantly kill any enemy. Unlike the previous game, the attack can kill any boss in this game, including the last boss.

The story progresses as completing one dungeon after another. Since there are more than 30 dungeons in the game—all in the form of forts, caverns, and castles—and trekking through them can become quite tiresome and dull. The lively banter of the likable cast breaks up the monotony of dungeon crawling and grinding. Materia and Doll reprise their roles in the party, and now there are two additional characters to the cast. King Leparton and his wife, Familsa, join Materia once she goes twenty years into the past. Familsa looks a lot like Materia and even sports the skimpy bikini armor, at least in the artwork provided in the instruction manual. King Leparton is a formidable swordsmen. Both of them are actually stronger than Materia.

The graphics have some slight improvement, especially in the case of the town layouts and character portraits. The Game Boy can only allow so much. The upgraded details are subtle, but appear in things like the furniture of a home, or the texture of a tree.

Overall, Aretha III is a good RPG for its time, especially for the Game Boy. It draws a great conclusion for the trilogy, even allowing for a nice plot twist at the end (hint: It’s not Howard). This game is also the hardest to find of the trilogy, considering it’s rarer than the other two if you want a physical copy. There are no known translations, so knowledge of Japanese is a must to play it.