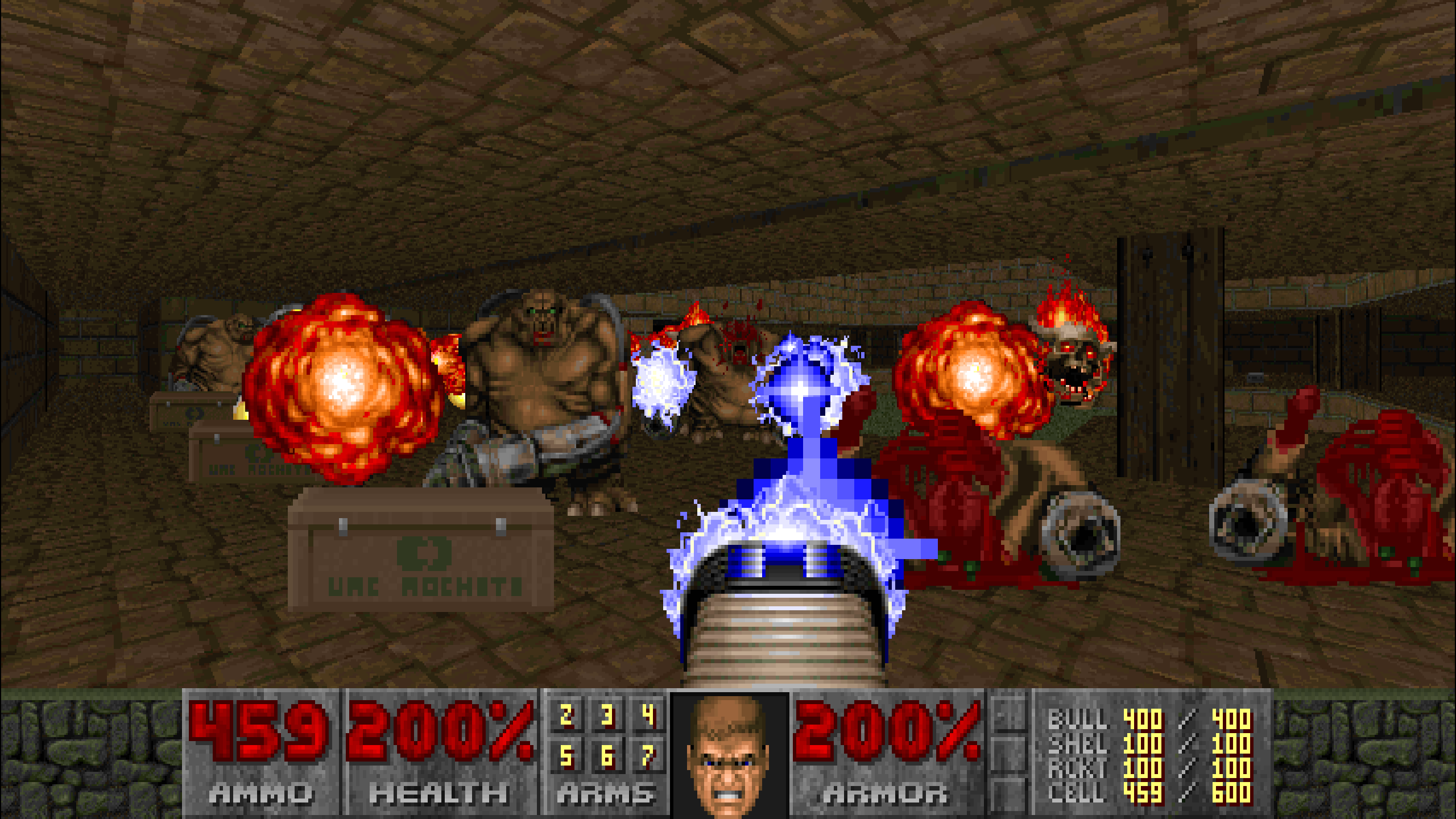 Note: Screenshots, unless stated otherwise, come from the Doom II re-release by Nerve Software for PC, which does tweak the graphical fidelity of the original game, but otherwise remains faithful to the original style. Both campaigns in the game are included as free add-ons.

In 1995 and 1996, Id Software was in the middle of eating itself alive. John Romero would mark Quake as his final game with the studio before leaving to form Ion Storm, the game’s ridiculous development cycle really testing the team’s cohesion. Before Romero left, though, he contacted a group of Doom fans who were working on a free megawad campaign called TNT Evilution. Romero and Id Software made them an offer for a publishing deal shortly before the campaign was supposed to be released, and they took it. Fans are still a bit miffed over this, considered one of the most infamous WADs in the community. 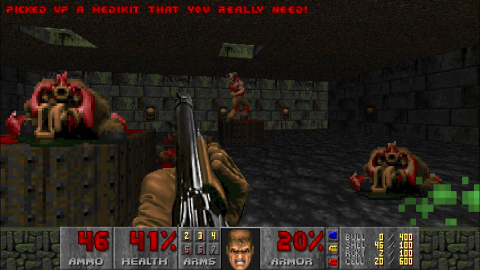 However, two members of this team, known as TeamTNT, presented some unfinished levels to American McGee they made in their spare time that resulted in them getting the green light on making an entire second megawad sized campaign for a joint bundle known as The Plutonia Experiment. The two developers behind this, Dario and Milo Casali (yes relation), would go on to find steady work in the industry – Dario ending up joining the cabal of developers that would make Half-Life. He’s still at Valve to this day, but it’s not clear what exactly he does over there anymore due to the company’s weird structure. 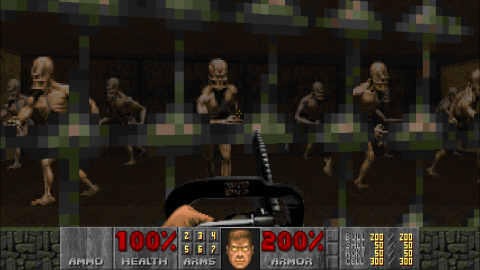 Final Doom is a bizarre package because the two campaigns included on it share similarities in a focus on high difficulty and hordes of monsters, but are also night and day in terms of quality and design ethos. TNT Evilution has a fun, goofy set up revolving around a hell spaceship, you know, a spaceship from hell, while Plutonia has Earth’s scientists creating powerful devices to disrupt hell portals that go nuts when the demons just make more than one and start yet another invasion. Both campaigns are designed to grind you under their heel, but they have different tactics to accomplish it.

TNT Evilution has the best first impression, with a lot of maps containing impressive aesthetics in its maps, compared to the rather plain use of brown in Plutonia. Places almost look like places most of the time, including a warehouse area that has a little guard station for stopping cars that houses a monster of two. It even has an original soundtrack, unlike Plutonia, and it’s darn good rock and metal supplied by a variety of fan artists. There’s also some satisfaction to be had from the large enemy numbers making for fun fodder for your super shotgun and chaingun. The use of monster closets is inventive, especially on the first map keeping you on edge with surprise after surprise. However, it doesn’t take long to start noticing problems. 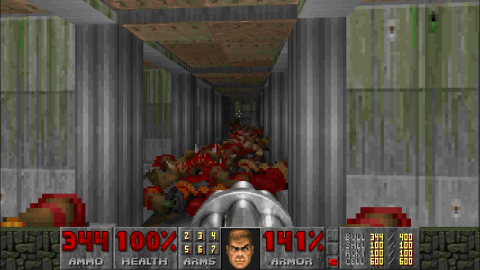 TNT Evilution, despite being snatched up hours before it was supposed to release, feels very unfinished. It’s not because of a lack of map detail, that’s one of the campaign’s big strengths, but rather the enemy placement. The levels here are filled with large, empty spaces designed for hectic battles, but they all instantly suffer by the designers looking at these big areas and thinking to themselves “you know what this needs? All the chaingunners in the world.”

TNT Evilution’s difficulty comes entirely from hitscanning enemies – hitscanners as far as the eye can see, so many hitscanners stuffed in every nook and cranny and often in places where you can’t actually get them before they start pelting you. Remember that one room in Serious Sam 3 populated by an army of hitscan scorpions? Imagine that but there’s no cover. That is at least half of TNT Evilution, and it is obnoxious. It is the team’s favorite trick to wear your health down, ESPECIALLY having them come out of closets behind you, and it wears out its welcome by map three. Problem for a campaign with thirty main maps and all of the maps use this trick constantly. All of them. All of them. 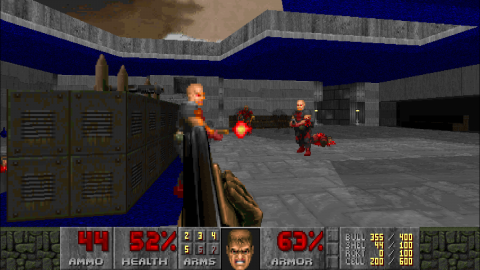 TNT Evilution does have good levels, like Ty Holderman’s Wormhole, the campaign’s forth map with a nasty arch-vile surprise and a completely optional secondary mirror map with tougher enemies, but they are few and far between. The majority of your time spent with it is dealing with hordes or hitscanners and chaingunners placed far in the distance or frustrating traps that start to become repetitive and annoying in a way that just make you go “really, this again?” It’s in a strange middle ground where it’s absolutely difficult, but not in a way with any real challenge. The game constantly side winds you in a way that doesn’t quite kill you so it’s not completely evil, but it does force you to be at low health a lot with the same few tricks over and over. The rest of the time is spent with boring and long segments where you easily deal with low level monsters, and very occasionally, if you’re lucky, some fun bits with higher tier beasts. It is the Doom WAD equivalent of MST3K’s Deep Hurting gag.

The campaign has its fans, and the value of it can be seen on lower difficulties where there’s less abuse of hitscanners, but playing on Ultra Violence is just an exercise in frustration. Not hard enough to be engaging, but too repetitive to really stick out with any spectacle because it runs out of tricks about six maps in. Plutonia, on the other hand, is filled to the brim with surprises and genuine challenge. It is also one of the meanest games you will ever play, a well constructed killing machine that you have to respect for the sheer understanding of Doom in all of its elements. 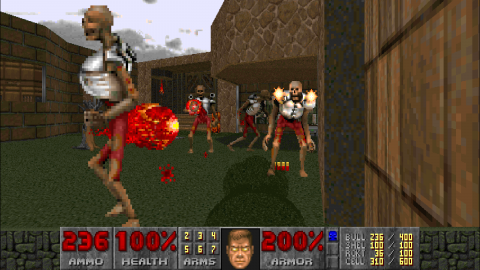 Plutonia lets you know what your in for quickly with a courtyard full of Chaingunners, grabbing the rocket launcher has you dealing with a mess of closets revealing a ton of revenants (who you will see a lot in this campaign), and having a single arch-vile stashed behind a Chaingunner in a balcony that revives it forever until you kill it. There are also already Mancubi guarding the exit. It’s not long after that before you’re getting pelted by cacodemons and revenants from across a canyon with an invisible bridge you have to activate, finding some very mean teleporter traps, and fighting a spider mastermind, another courtyard of Chaingunners, followed by an ambush of Revenants, then a barrage of Hell Knights and two Arch-viles that revive everything you spent time killing earlier. Did I forget to mention the revenants come out in a dark room? Because they come out in a dark room. While you’re in it.

There’s an interview Dario Casali did with Doomworld where he states the design ethos was to make a hard level, something to challenge experienced Doom II players, and if he beat it too quickly, he’d make it harder. He has no sympathy for someone who plays Plutonia on hard and complains it’s too hard. It shows. There’s a level called Hunted in this campaign where you explore a maze with the bunny music from the end of Doom playing and a bunch of arch-viles trying to find and violently explode you. One of the ending portals has a ton of monsters that let you continue after your health is dropped extremely low. You have to use that portal instead of the normal exit to get all the kills for the level. 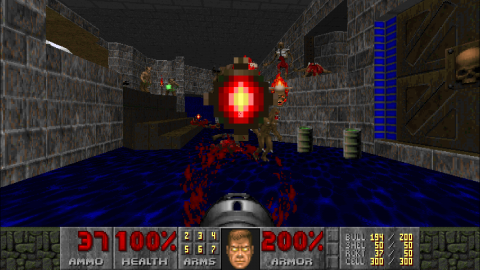 TNT Evilution was trying to be a more bonkers Doom II, with a greater focus on the look of the maps. It wanted to be more and kind of misunderstood the design of Doom II that made it such a thrill to go through. Sure, it had a ton of monsters, but it rarely felt like you were dealing with a challenge that tested your movement, understanding of weaponry, and other useful skills honed over playing so much Doom. But The Plutonia Experiment? This is a masterclass of how to use the monsters and where to place them for maximum efficiency and challenge. This one campaign is what really started the trend of the slaughter maps in the Doom modding community, specifically because of the game’s final secret level.

Go 2 It is one of the most ridiculous levels that has ever been in a commercial video game, and the absolute hardest in the Doom franchise, with maybe some stuff in Doom Eternal to challenge it. 11 Pain Elementals, 19 arch-viles, an army of cyberdemons, often appearing in groups, and a central courtyard in a hollowed out E1M1 (with a bit of Doom 1 and Doom II in there) filled with arachnotrons, revenants, and all sorts of other nasty bastards – and that doesn’t even get into all the other rooms populated with pinkies, mancubi, and everything else they could fit in there. It is a hard, hard map, but it is so satisfying to experience. If it turned out Croteam was inspired mainly by this map I would not be surprised. Few moments in the franchise hope to challenge it in terms of spectacle, action, and sheer heart pounding danger. The Suburbs mancubi mosh pit times ten thousand. 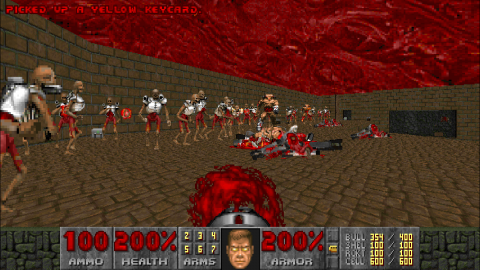 TNT Evilution doesn’t get a lot of love these days, but people still talk about The Plutonia Experiment. It is the pinnacle of official classic Doom in terms of design, in terms of understanding how to use those elements to make something awe inspiring. It is also a miserable experience if you do not pass the skill floor, which is most humans if we’re being honest. It was made for specifically one type of player and your enjoyment of it depends on how much of a challenge you’re looking for. 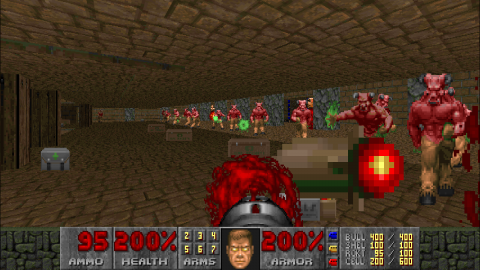 Final Doom for the PS1 is notably very, very different, which is unsurprising when you see Williams Entertainment were behind it. The studio tended to be picky with used maps in the first Doom port (which was also a Doom II port sorta, it’s confusing), along with tweaking them, and Final Doom is almost unrecognizable – in a good way. The team have a great understanding of darker mood, using it well, but they got a bit weird with this one and used mainly stages from the Master Levels of Doom II expansion. Plutonia only had six maps make it over, with TNT Evilution getting eleven. It should go without saying there were a lot of map tweaks, like removing monsters or changing them here and there, possibly for the sake of allowing the game to run better on PS1 hardware. Much like the previous PS1 port of Doom, it uses Aubrey Hodges’ more subdued soundtrack, as well as a handful of newly composed pieces. In a cool plus, there is alsoPlayStation mouse support. 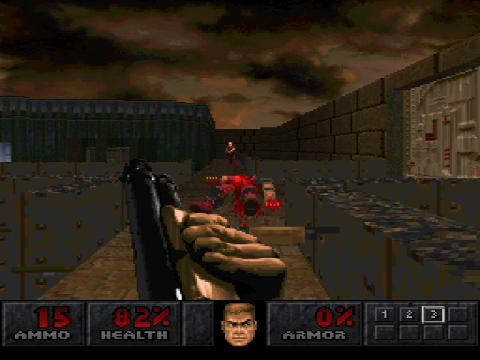 So this is the end of classic Doom, right? Id Software were moving onto the Quake series, and the next numbered game wouldn’t be until the 2000s. Well, Williams Entertainment, now bought out by Midway, were doing a great job with ports, making unique experiences with Doom you couldn’t get anywhere else. As a result, they were able to get the chance to make their own Doom game, what they were planning to call “The Absolution,” which is a wicked title. That game, for some reason, would release exclusively for the N64, which meant is was then renamed Doom 64. It is both the black sheep of the classic era, and arguably the best one overall.