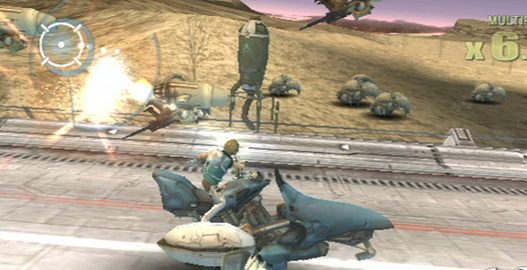 When Nintendo announced the motion control remote for the Wii, longtime gamers were skeptical that it could actually enhance the gaming experience. Indeed, this proved to be mostly true, as games using the Wii remote were more about flailing randomly than anything resembling actual skill. A small handful of games, like No More Heroes and Super Mario Galaxy, used the motion controls to enhance the experience, although in most cases they were extraneous. And so, it didn’t seem like anyone was really using the Wii remote to its fullest potential.

That is, until Sin and Punishment: Star Successor came out. 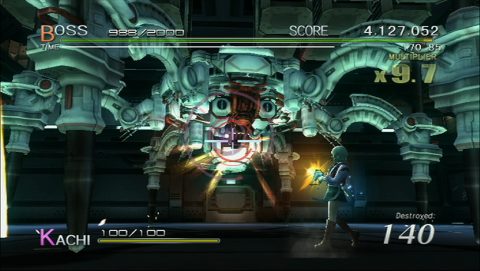 Sin & Punishment is a totally ideal fit for the Wii – the nunchuck in the left hand to the control the character, the Wii remote in the right to control aiming. It’s far more natural than any of the setups in the original Nintendo 64 game, and it’s almost surprising that it took anyone this long to develop a rail shooter using these controls. Sin & Punishment 2 only took so long because Nintendo didn’t realize the demand. It wasn’t until they saw the Western sales of the Virtual Console re-release of the original Sin and Punishment that creating a sequel was of the utmost importance.

The application of the motion controls is obvious – it’s smoother, more logical and far more approachable. From a technical standpoint, it’s obviously improved too – as a native Wii game, it looks leaps and bounds beyond the foggy Nintendo 64 technology, and runs at a solid smooth 60 FPS at almost all times. The character models are a bit dodgy, but the incredible looking bosses more than make up for it, resulting it what is easily one of the best looking games on the Wii. 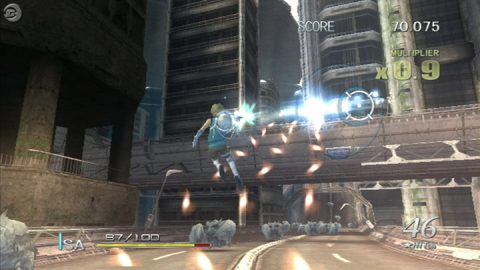 The fundamentals are pretty much the same. There are still two types of targeting cursors – an entirely manual one, and a lock-on which will reduce damage but make it easier to aim. You can also still reflect projectiles with a sword attack, executed by tapping the Z button. The biggest change is the ability to fly at all times, removing the need to jump. In its place is a dash roll maneuver, which lets you quickly dodge and gives you temporarily invulnerability. While this might theoretically sound like it would make things too easy, there’s also a split second after each dash where you’re susceptible to damage, requiring that you not only time them perfectly, but also make sure that you end up in a safe spot. You also have a charge attack, which deals substantially more damage than your standard rapid fire laser. After firing, it takes a few seconds for it to be used again, but careful balancing of dodging and charge shooting is absolutely essential to the mastery of the game. The original game also changed things up a bit by switching to a side-scrolling perspective on a few occasions. This sequel does the same on occasion, and a few boss fights zoom the camera out to allow 360 degree movement, similar to the shooter/fighter hybrid Senko no Ronde. 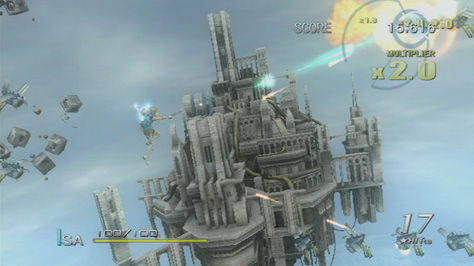 The story is a bit less insane than the original, though not by much. It takes place several years in the future, where it’s become apparent that there are two dimensions: Inner Space and Outer Space. One of the agents from Outer Space takes the form of a human girl and invades enemy territory, only to be hit with a terrible bout of amnesia. She’s rescued by a boy named Isa, the son of Airan and Saki from the first game. Having apparently forgotten her mission, she instead decides the side of her nemesis. This action angers a group of mysterious beings known as the Creators, who command a group of five beings known as the Nebulox (known as the G5, or Gathering of 5 Countries, in the Japanese version) to take them down. You can play as either Isa or Kachi, who possess slightly different abilities. Kachi’s auto-lock is as powerful as her manual one and her charge attack can lock onto multiple enemies. Isa has a better firing rate and is more powerful, and his charge shot is a single powerful blast. Again, there is technically a “two player” mode, but the second player just controls their own set of crosshairs, without actually playing as their own character.

The North American and European versions include both English and Japanese voice acting. The North American version is subtitled Star Successor, while the European version it’s Successor of the Skies, which sounds slightly better. The English script weakens some of the religious undertones – the “Creators” were known as “kami” or “Gods” in the Japanese version – although the uncensored English story was presented on the official European site. 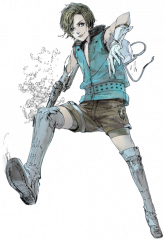 The son of the protagonists from the first game, Isa is afraid of the powers he may have inherited from his parents. However, he takes it upon himself to protect Kachi from the forces who seek to destroy her. 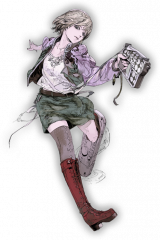 A life form from another dimension, she has lost nearly all trace of her memory and is given her name by Isa. Despite her apparent innocence, as evidenced by her form as a young girl, the Creators apparently feel she needs to be annihilated. 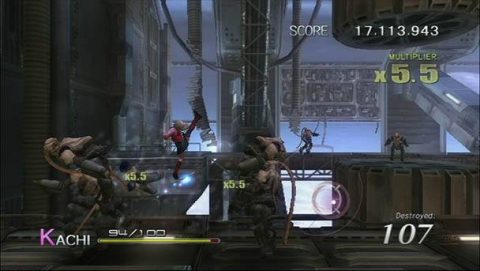 Sin & Punishment 2 is also a much, much larger game than its predecessor. Sin and Punishment only included three full stages (and a single short one.) The sequel includes a total of seven full stages, in addition to similarly brief prologue stage, making it over twice the length. It also saves the game after every checkpoint and offers unlimited continues. Once a stage is completed, you can restart at any area, which is perfect for replaying favorite bosses or trying for score attacks. Sin & Punishment 2 is also substantially more difficult, even on the Normal setting, so to balance this it offers as many retries as necessary. 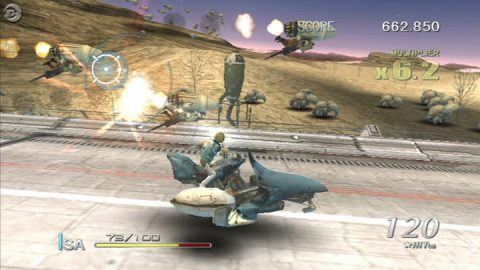 The scoring system is pretty simple. A multiplier slowly crawls up as you kill enemies – when you get hit, it drops a small bit. That’s about as complicated as it gets, but many areas are filled with masses of popcorn enemies that fly out in the distance. They’re not dangerous, but taking down these swarms will obviously help increase your multiplier further. It also offers online leaderboard functionality, if you want to compare your scores to other players.

The stage designs and bosses are of the highest caliber, of what one would expect from Treasure. Each checkpoint usually changes up the scenery or introduces new enemies, so you don’t spend more than a few minutes doing the same thing. The scenery is varied, ranging from destroyed landscapes to underwater subways to Japanese forests to desert roadscapes (complete with jumping sand worms of course) to the volcanic expanses of Mt. Fuji. Bosses include all manners of battleships, flying monstrosities and other such behemoths. Most stages culminate in a battle against one of the members of the Nebulox, all of whom wield a variety of increasingly insane powers. In a fight taking place over the ocean, one will morphs into a series of deadly dolphins, who pull off a series of killer acrobatic maneuver. It sort of makes sense on context – the transformations show the evolution of sea life – but it’s still bizarre. 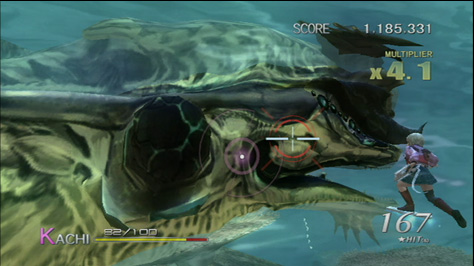 A later section involves a boss whose hide is too thick for bullets, rendering it immune to regular attacks. Instead, your characters jump on a train, while a rear view mirror pops up on the top of the screen, showing the foe giving chase. The only way to beat him is by disconnecting the various train cars so they smash into your pursuer. After getting killed, it spews a small baby from itself, causing our heroes some slight guilt that the grotesque monster they destroyed was actually a mother. The baby crawls out of sight and, for some reason, mans a crane that snags your partner and threatens to toss him/her in the lava. This whole stage also involves a segment where you can fling a stampede of cow-like creatures into the horizon, destroying distant fortresses. During one of the fights against one other Nebulox member, your character is bound to him with a rope, forcing you to play a very simplistic 2D fighter-type game to beat him up. The final stage takes place after the heroes have transformed, similar to the giant robot form from the first game, as they approach the Nebulox base hovering in Earth’s orbit. Here, the camera switches to the bridge as each member of the quintet teleports out to face you, a concept practically lifted straight from the climax of Gunstar Heroes. In other words, it’s gorgeous.

Treasure has always had something of a spotty track record with sequels. Games like Gunstar Super Heroes, Guardian Heroes Advance and Bangai-O Spirits are all fine games, but they all falter in one way or another – Gunstar Super Heroes for stripping down its mechanics, and the other two for almost completely reworking the experience. Sin and Punishment 2, though, is probably the only Treasure sequel that not only stacks up the original game, but exceeds it, resulting in not only one the company’s best titles, but one of the absolute must-haves for Wii.