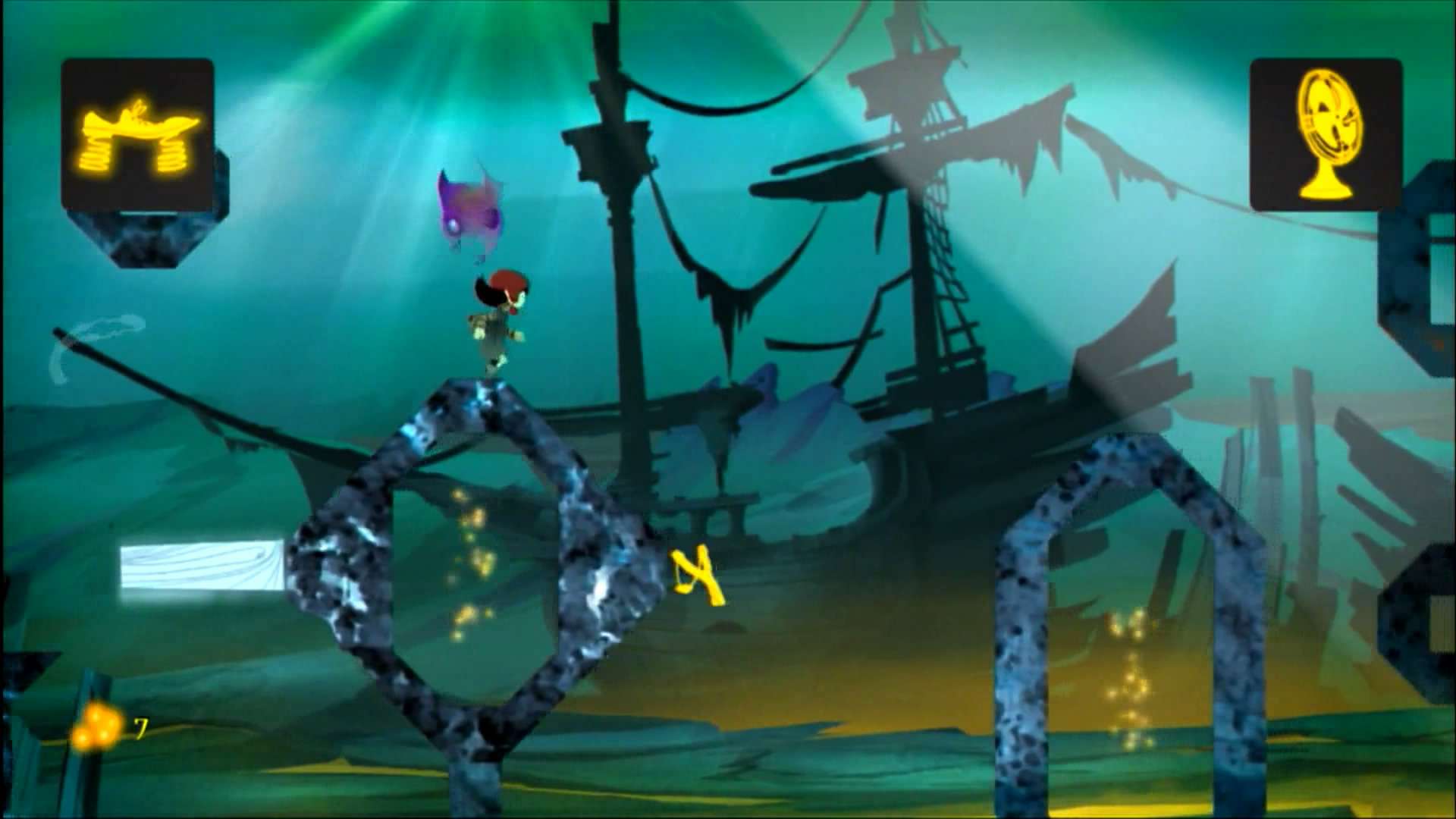 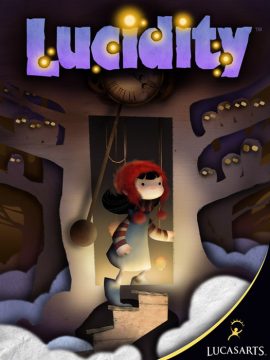 There was once a time when LucasArts wasn’t just the publisher/developer of the latest line of throwaway Star Warsand Indiana Jones games. Before the days of Jim Ward, LucasArts was a thinktank that attracted incredible talent the likes of Tim Schafer, Steve Purcell, Ron Gilbert and other now legendary game designers and artists, and it used those talents to create some of the most charming and personality-infused games of their day, games whose resonance is still being felt in the industry today. Games like Maniac Mansion, Zak McKracken and Monkey Island, just to name a few.

However, like everything else Lucas has created, LucasArts went astray somewhere along the line and now we’re left with The Force Unleashed, The Staff of Kings, Fracture, and their soulless kin while other companies (some started by LucasArts alumni) like Telltale and Double Fine are left to tend to that nearly extinguished magic.

That’s why Lucidity is such an anomaly. Lucidity is the kind of game LucasArts would’ve made 15 or 20 years ago, and contains all the artifice and trappings of a game from that chronological stratum, but it’s the type of game that could only be released now because it could only find an audience on downloadable services like Steam and XBox Live Arcade. And it would take a particularly curious and persistent audience indeed to discover Lucidity, as while it is a wonderful game, it is a game that is very particular about the audience it wants to be enjoyed by. 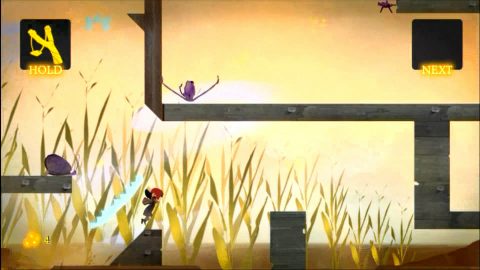 Lucidity opens innocently enough. A young girl (Sophie) is reading a book in a very comfy looking bed in a very comfy looking cabin while her grandmother keeps a vigil from her rocking chair, knitting away as grandmas are often depicted doing so. Sophie’s imagination runs wild as she is immersed in the adventures in her book, and soon, she drifts off. When she awakes, she is alone but for a firefly that quickly flitters off. Sophie gives chase, but soon finds that the cabin begins to morph into a dense forest, leaving Sophie stranded and bewildered. Yes, it’s another one of those “Down the Rabbit Hole” stories, but at this point Lucidity diverges from almost all convention.

Lucidity is a puzzle/platforming game comprised of dozens of brief side-scrolling stages. Now, while that may sound like a great deal of the games available on today’s downloadable games services, here’s the catch: you have no control over Sophie. Sophie skips merrily on her way through these stages completely oblivious to all the perils that are laid out in front of her. These perils come in the form of various creatures, pitfalls, harmful terrain elements and more. Your role as the player is to furiously lay the tracks in front of this adorable, befuddled train as it chugs constantly toward certain death. The tools the game gives to you to perform this seemingly impossible task are a set of objects that affect Sophie’s progress: planks of wood that Sophie can walk across; trampolines that’ll give her a short bounce; stairs that’ll let her get a bit higher; fans that’ll blow her straight up and even through ceilings; slingshots that’ll launch her across the screen; and bombs that’ll blow holes in certain walls and eliminate enemies. These objects are given to you randomly, and you’re merely allowed to store one for later. What you essentially have is some sort of perversion of Lemmings and Tetris set on the backdrop of an oldschool platformer. 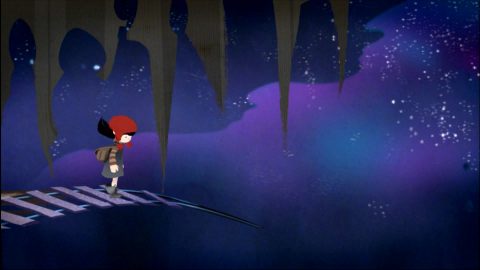 To beat a stage in Lucidity is to be really resourceful with the items given to you. You’ll have to learn the nuances of every item and how you may be able to abuse them in such a way that’ll make them do something they weren’t necessarily intended to be used for, since you’ll occasionally need to go up and you can’t always count on that fan or trampoline showing up when you need it to, and sometimes a few bombs or slingshots used in a certain sequence will have to suffice. There are times where Sophie will get trapped behind a wall and you’ll have time to cycle through items until you find one that’s useful, but this becomes impossible later on as Sophie is being followed by a darkness swallowing the entire stage behind her. On top of that already absurd premise, your secondary goal apart from getting Sophie to the end of the stage alive is to collect the fireflies strewn throughout the stage, and in almost no stage is this possible to do without playing through it several times. Apart from unlocking stages, collecting a firefly allows Sophie to get hit one more time before she dies, and collecting one every few steps is almost a necessity for survival in some stages.

If you haven’t figured it out yet, Lucidity can be insanely frustrating. Often times, it can feel like you are at the mercy of luck, and a bad set of items will invariably lead to your demise. The first version of Lucidity was almost unplayable, as dying meant starting the entire stage over again. Fortunately, LucasArts eventually updated the game to include checkpoints at various locations in every stage (but not before critics could slam the game for its brutal difficulty). With the checkpoints in place, Lucidity is a much better game and still offers quite a challenge for gamers from any discipline, and your enjoyment of it will depend entirely on how much patience you have for that kind of thing. Yes, there were times where I was cursing Sophie’s existence and wanting to chuck my controller across the room, but there are moments of clarity (or lucidity, if you will) where everything gels perfectly and you slide through a difficult stage like a champion, and few things are more satisfying.

Along with the gradual yet unforgiving incline in difficulty, Lucidity also goes through some drastic tonal and thematic shifts, getting progressively darker as it goes along. The beautiful yet surreal forest gives way to a somber twilight farm, then plunges into the depths of the sea, and when Sophie finally comes ashore, she is in a cold, bitter world sapped of life and frozen in time. These thematic shifts are represented beautifully in Lucidity‘s unique art style and music. The music certainly deserves a special mention as it carries a very eldritch quality throughout all of the game’s locales, shifting at a moments notice from calm and relaxing to inducing utter despair. It stands as one of the most beautiful and atmospheric ambient soundtracks ever. 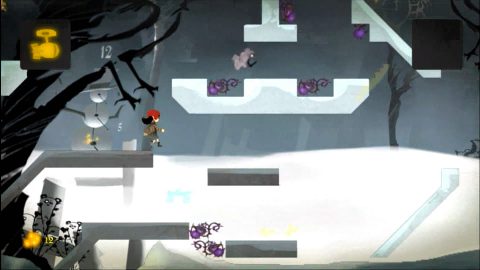 But what’s really great about Lucidity isn’t the great challenge and exhilaration that comes in completing its stages or the immersive and vibrant qualities of its aesthetics and music, but the story it tells. Or rather, the story it doesn’t tell. Now, you may want to quit reading and play the game at this point if you don’t want anything spoiled. You’ve been warned. At the end of each stage, Sophie finds a mailbox with a letter from her grandmother in it. These letters typically contain a tidbit of information her grandmother gave her at some point in her life relevant to the stage you’ve just completed. Apart from a handful of cutscenes revealing more about the nature of Sophie’s dream world, these letters form the only narrative present in Lucidity, and that narrative is ironically vague. But what it creates is a great, subtle story. You see, Lucidity could’ve easily been a humdrum adventure driven by a clear plot arc or an aimless exploration of thematic terrain, but Lucidity isn’t those things. It’s about a little girl coping with the loss of someone she loves and trying to remember the wisdoms that person gave to her over the years to prepare her for womanhood, and when contrasted against the bald-headed melodrama and masculine, grizzled space-marine theatrics LucasArts (and the games industry at large) stands behind these days, it makes for quite a poignant statement from a fairly unexpected place.