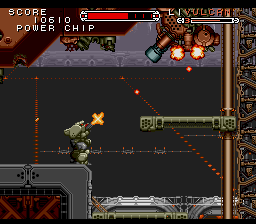 Assault Suits Valken (known as Cybernator in North America) is a prequel to Assault Suits Leynos / Target Earth. That game made an allusion to a massive conflict known as the Fourth World War, where Earth descended into chaos due to dwindling fossil fuels. This game tells a story of a soldier named Jake Brain, drafted into the Federation, who pilots an Assault Suit and fights against the opposing Axis government. The connections to its predecessor are loose, at least from a storyline perspective, though both games feature an appearance by a battleship called the Versis.

Cybernator is such a remarkably huge improvement that it completely shames its predecessor. The view has been moved closer, with much larger characters and far more background detail. Your mecha now always has the ability to hover, and can dash too, either by hitting A or double tapping forward. The controls still take some getting used to, especially since there’s a split second delay whenever you jump, and it’s too easy to accidentally start a dash, which can’t be cancelled. But the best addition is the ability to lock your firing direction by holding the L button, which makes things much, much easier. The firing angle can be tweaked in 30 degree increments, allowing for a high amount of precision. You can also use a shield by hitting the R button, which can protect you from practically any projectile. This is particularly useful, especially since your mecha is so big, making it an easy target.

You start out with a standard Vulcan cannon – much more powerful than the pea shooter from Target Earth – as well as a standard punch attack. You can also find secondary items like missiles, lasers, and homing rockets. These only appear once each during the course of the game, but once you find them, they’re never taken away, although they do have limited ammo. Throughout each level are P icons, which will power up your currently equipped weapon if you grab enough. The Vulcan is pretty useful even on its own, especially since the bullets reflect off any surface, and it turns into a mecha wrecking machine once powered up to the third level.

There are seven levels in and total, and while they’re technically linear, they are fairly wide open, so there’s no real direct route to the end of each stage. You can bring up a map at any time to see your basic surroundings too. It’s definitely to your benefit to explore and find power-ups, and especially the additional weapons, because they’re easy to miss otherwise. Some levels also have secondary objectives, like destroying the boss in the first stage within a certain time limit. The game will still continue if you fail these, but if you screw up too many of them, you’ll get a crappy ending. 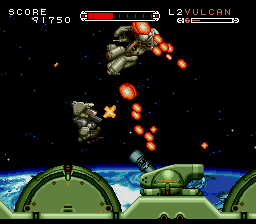 Masaya also put a lot of subtle care in both the graphical details and level designs. Most of the stages begin with some kind of launch sequence, whether you’re flying through an asteroid belt, skiing through the snow, or descending from orbit down to the Earth, which really gives the impression that you’re on a military mission instead of simply jumping from stage to stage. Every time your shots hit a surface, it leaves a small burn mark. When you stomp through a hallway, blowing up gun turrets and massacring tiny human soldiers, it adds to the satisfying feeling of destruction. Like its predecessor, each stage begins with a mission briefing which outlines the level layout, with your friends radioing you orders and advice throughout the stage. They’ll give you a warning when you’re low on health, but it’s really cool the way they begin to yell out your name, in text, right as your mecha explodes in a huge white flash. The music is pretty damn catchy too. It’s definitely aspects like these that cement Cybernator as an SNES classic. The only thing missing from Target Earth are the appearance of allied units, whereas here you just fight alone.

Konami published this title in North America under the name Cybernator. For some reason, they removed the portraits by the dialogue (even though they still appear unaltered in the intro) and significant chunks of text. including several supporting characters, and a hidden message after the credits, which tied into Target Earth. It’s a bit lame, considering the character designs were provided by Satoshi Urushihara, who also did Masaya’s Langrisser series. One scene was removed completely, where your mecha flies into an office and meets up with a corporate official, who proceeds to take out a pistol and blow his pixellated little head off. Obviously such brutal suicide would not have gone over well with the censors at Nintendo of America. You can find a fan translation patch for Assault Suits Valken which lets you play the unedited game in English.

There’s a substantial amount of backstory to Assault Suits Valken, much of it expanded on in supplementary material included in the Japanese strategy guide. This is one of the reasons why the game is so well loved in Japan. Unfortunately for the English version, you only get a glimpse of this in the game, as the setting is relayed just through brief mission introductions and what few in-game conversations remain, which doesn’t nearly represent the amount of detail put into the universe. 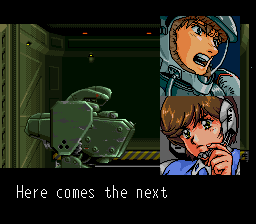 In 2004, Assault Suits Valken was ported to the PlayStation 2 by X-Nauts (the remnants of Psikyo) and published under a budget label. While largely the same game on the surface, the visuals now run in a higher resolution, and all of the sprites and backgrounds have been polished a bit. They don’t necessarily look better, though – in fact, it just looks like everything was upscaled and then slightly repainted, as opposed to being completely redrawn, so it seems a bit cheap. It seems to control right on the surface, but the direction lock functionality has been changed – instead of maintaining both the trajectory and direction, it only fixes the trajectory, so you can no longer move backwards while firing forwards, which is a stupid, stupid change. The balance has also been altered for the worse, so enemies take much more damage, and your own mecha is significantly more frail. (Good luck getting past even the simple scrolling section in the second stage!) There’s a new “stage 0” which acts as a prelude, but it’s terribly brief. The music also somehow sounds substantially worse than the SNES version. In other words, it’s a shoddy port all around, and should be avoided. It was only released in Japan and Europe. 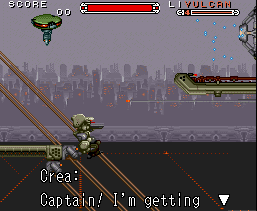 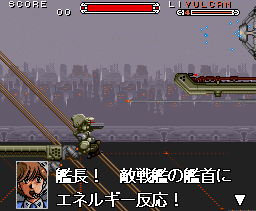 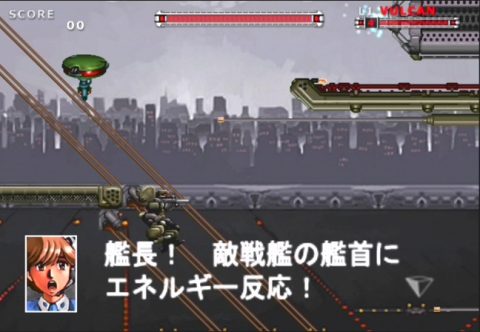 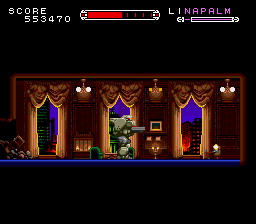 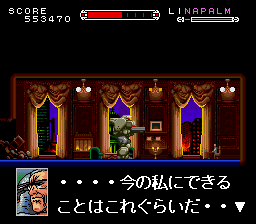