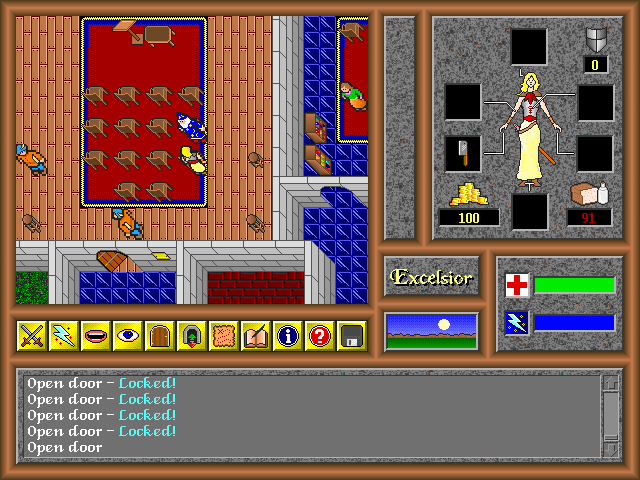 In Excelsior Phase Two, you again take on the role of a Fixer. Your task, however, is slightly different. A measly Fixer Third Class was sent to the land of Errondor to carry out a simple assignment, but she never returned. You are to go to Errondor with two goals. First, complete her failed mission of ensuring a smooth peace ceremony between two warring nations, and second, discover what became of the missing Fixer.

As one might guess from the short description above, this game has an even more complex and developed plot. This is not the only improvement. The graphics have been updated to a larger full-color format (clearly modeled after Ultima VI). Sound and music are featured this time around, though there is not much worth mentioning in that department. Several aspects of the gameplay have changed significantly. Conversation is no longer limited to a few lines of text; a simple text parser is utilized for lengthier and more interactive conversation. Time of day is now a factor as the outdoor areas continuously cycle between day and night. Perhaps the most noticeable change is a MUCH more intuitive mouse-based interface. Instead of having each key on your keyboard assigned to a different command (that’s A LOT of possible commands), there are only roughly six commands total. Each can be done using the mouse or keyboard shortcuts. It is significantly smoother and simpler.

Another aspect that has been streamlined is the character creation and attributes. There are no classes or races (only the option of male/female), the list of skills is much shorter, and the attributes are limited to only the three primary attributes of the first game: strength, dexterity, and intelligence. In general, there is much less freedom in customizing your character. The one exception to this is inclusion of weapon proficiencies. The more you use a particular class of weapon, the more skilled you become with it. Spells are learned automatically when you reach a particular level instead of purchased, and what equipment your character can use is restricted only by his dexterity. These two factors remove the limitations of the class choices from the first game. 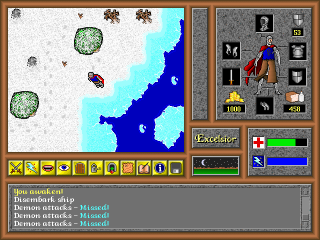 Above all, what really separates Phase One from Phase Two is the way the game progresses. Anyone who completed the first game likely recalls endless hours spent wandering around a huge world, hoping to stumble upon something that would aid in the adventure. Phase Two plays much more like a modern adventure game. The world is still open and features several side-quests to be completed (the most memorable involving the overthrow of the great chicken emperor), but in general, you are directed very clearly from point A to point B to point C and have little motivation to veer from your path. This has its advantages and disadvantages. One of the huge advantages is that the plot pacing is significantly better. Also, gamers will not be frustrated by the incredibly subtle (or complete lack of) clues the first game frequently offered. Unfortunately, the disadvantage strikes at the heart of what made the original so great: the feeling of an open and interactive world.

Less opportunity for customization combined with a more linear adventure sets the second game apart from the first. The games are similar, however, in that they are both extremely playable and engrossing, and they should be considered true gems of shareware gaming. The creators of Excelsior continue to be invested in their labors of love, having recently updated both games to be compatible with Windows XP and later. Be sure to drop by excelsior-rpg.com to these give them a try. The initial download is free as uncrippled shareware, and when you register the games, you receive an extensive manual and hint book.

Special thanks to Matthew Engle for providing his quote and all the background information.