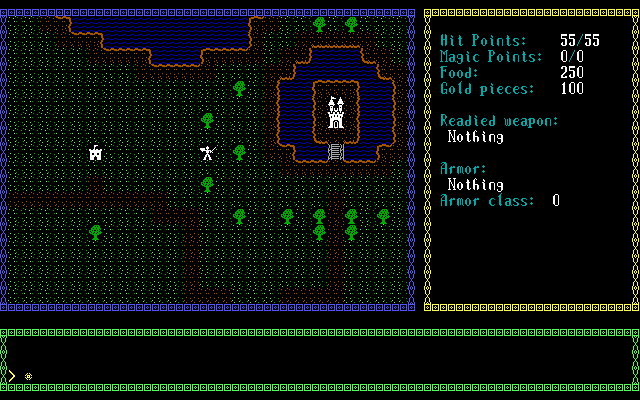 The Excelsior series consists of two shareware games: Excelsior Phase One: Lysandia and Excelsior Phase Two: Errondor released in 1993 and 1999 respectively. These fantasy role playing games were created by two friends, Matthew Engle and Daniel Berke, under the name 11th Dimension Entertainment. The duo began developing games together back in 1984 and had completed several text adventure games, seeing their first shareware release with Skyland’s Star in 1990, before they began the Excelsior series. Excelsior co-creator Matthew Engle was kind enough to personally share some background on the development:

Dan and I worked on Excelsior Phase I for three years and Excelsior Phase II for nearly five. Had we known how long each one would end up taking take when we started, we might never have begun! During most of those years we lived in two different cities and much of the game design was figured out over the phone or during the course of hours-long lunches at various restaurants when we happened to be in the same city.

When we started Excelsior I, we were both just beginning college but by the time Excelsior II was finished almost 10 years later, we had each been working for game developers or publishers for several years. It was a fun creative time. I look back on all those days spent drawing tile graphics, developing puzzles, creating and populating the maps, and doing the countless other things involved in writing Excelsior with a nostalgic fondness.

In both Excelsior games, you play the role of a Fixer, a demi-deity who works for the Grand Council of World Watchers. This Council oversees and directs the history of each planet. Of course, it is not a simple task and there are often complications. In Excelsior Phase One, a mysterious evil has arisen in the world of Lysandia and is throwing the land into chaos. You are sent to investigate. Being discrete is a must, so you enter the world disguised as a simple commoner.

Those who have played the early Ultima games or other PC RPGs of the 80s will feel right at home with the gameplay mechanics. When you start the game, you are greeted with the character creation screen. As you may expect, plenty of customization is available. There are a variety of races and classes that change your starting abilities. Your character has only 6 core attributes, divided into primary attributes and secondary attributes. There is an alignment attribute as well, which corresponds to the effectiveness of your spells (each spell has either a good/white, neutral/gray, or evil/black alignment). Perhaps the most interesting aspect is the long list of skills. The screenshot below sums up the character creation very nicely: 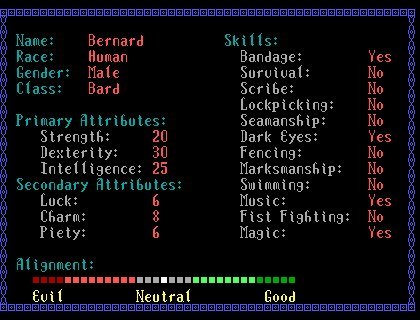 While there is plenty of customization, in the end, your choices do little to affect the way the game progresses as your selections do not affect the plot. Also, throughout the course of the game, there are opportunities to increase each attribute and, with a some effort, it is possible to obtain each skill. The most noticeable effect of your character choices will be your character’s hit point and magic point limit, and what equipment can be used.

Actions are turn-based and take place on a tile-based map. The game makes use of a modified ASCII character set for the graphics, which creates the blocky sort of world that should be very familiar to a seasoned RPGer. Dialog is short, typically consisting of only a few lines of text and virtually no conversation choices. The combat system is very simplistic; you attack using the “A” key followed by a direction arrow when you are adjacent to an enemy. A huge array of spells, different types of enemies, and the option of ranged weapons add some variety to the extensive (and repetitive) amount of time spent in combat.

Puzzles are a prominent feature. They are simultaneously one of the game’s strengths and one of its greatest weaknesses. These puzzles range from using items to finding secret doors to answering riddles to decoding text to other even stranger things. The beauty of the puzzles is that they are subtle enough that solving them is challenging and satisfying. The frustrating part is that several of the puzzles are SO subtle that the average player likely won’t be able to finish the game without running to a walkthrough multiple times. To add to that difficulty, it is possible to put yourself in an unwinnable state, though these situations are not as unforgiving as they could be.

In general, the gameplay is effective and not too different from other RPGs of the era. What really sets this game apart and makes it shine, however, is the extensive, open, and imaginative world it takes place in. The simplistic nature of the dialogue and the combat actually aid greatly in this, as you will be covering a huge amount of land and conversing with a large number of NPCs. By design, you will also find yourself traveling to the same place multiple times. Those who enjoy the exploration aspect of RPGs will be immersed in the world of Lysandia. By the end of the game, you will be very familiar with the different towns and regions and their unique features. A genuinely interesting story only adds to this. The moments of extended dialog and plot development are creative and enjoyable, though they feel sparse considering how long the game is. Through all of this, the game doesn’t take itself too seriously; there are plenty of odd town names and satirical dialogue to be found.

In the end, Excelsior Phase One presents solid RPG gameplay with an interesting plot and immersive world. The puzzles and other challenging aspects might scare off the average gamer before they finish it, but anyone who enjoys older PC RPGs or adventure games will likely be prepared for the difficulty.