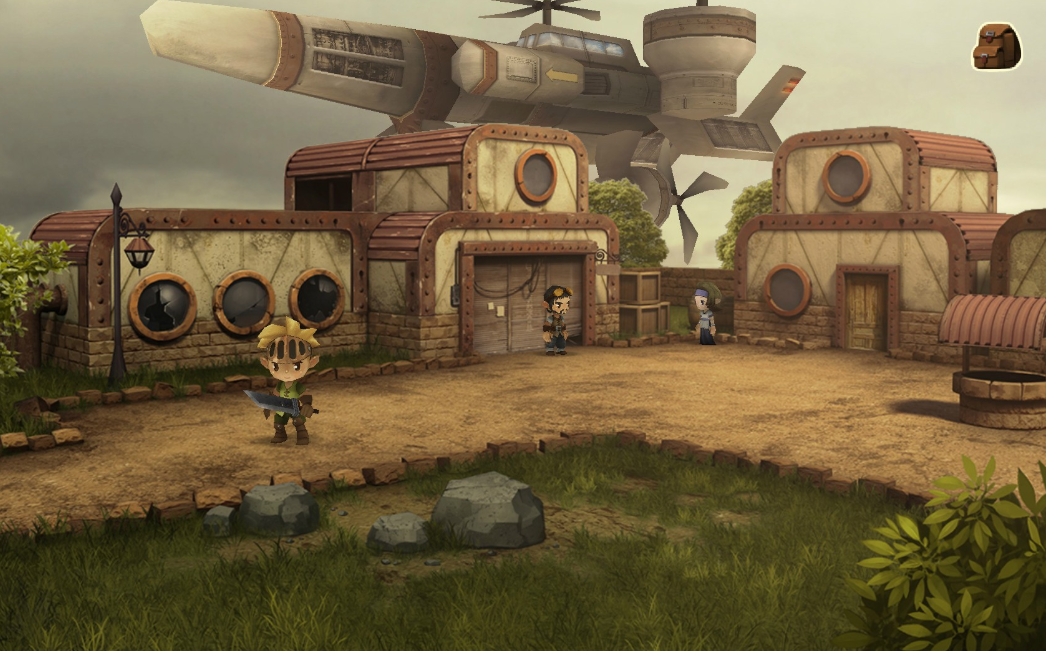 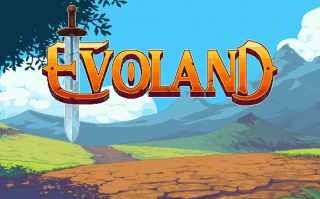 Like so many great indie games, Evoland began life as a Game Jam project. Ludum Dare, a video game programming contest that began on an internet forum of the same name in 2002, is responsible for some of the biggest titles in indie gaming, including Broforce, Pony Island and Gods Will Be Watching. At the 24th Ludum Dare Jam in August 2012, where participants are given a theme and have 48 hours to design a video game based around it, the topic was ‘Evolution’, and out of more than 1,400 entries, the winner was a game called Evoland by French developer Nicolas Cannasse, who would later team up with Sebastien Vidal to form Shiro Games and release Evoland as a fully-fledged game. The original entry to Ludum Dare 24 became known as Evoland Classic and is still available for free online.

The idea behind Evoland was uniquely simple; an action-RPG that evolved around the player, showing, in three to four hours, the journey from the video games of the late 80s up to the early 2000s. Shiro Games mainly cite Zelda, Final Fantasy, Dragon Quest and Diablo for their inspiration, but there are nods to Mario and The Elder Scrolls along the way. Because of this, Evoland suffers somewhat from not really having an identity of its own behind all of the references, although to some extent, the references are the entire point of the game. 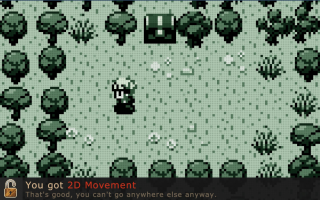 Evoland opens with a character in a monochrome, Gameboy-like setting who is unable to do anything but move right, where they find a treasure chest that unlocks the astonishing ability to move left, where they can find another chest that unlocks free movement. Shortly after this, they unlock a sword and monsters, an 8-bit and later 16-bit color palette, and as the game continues, you unlock more world features like save points, an overworld, random battles and more fantastic abilities, like… being able to move diagonally. Almost everything you unlock is a mirror to a real-world advancement in the video game industry, and it’s nice to watch the world around you transform from The Legend of Zelda on NES to an early PlayStation 2 RPG.

The actual story of Evoland is basic but fairly enjoyable. The main character, ‘Clink’ – it took me an embarrassingly long time to realize this was a mixture of Cloud and Link – wakes up in some nondescript woods and soon finds another party-member named ‘Kaeris’, a healer and spellcaster, and decides to help her save her village from the clutches of a dark nemesis, who, to the surprise of no-one, is named ‘Zephyros’. Subtlety is not one of the game’s strong points, and there are moments – a boss fight against ‘Kefka’s Ghost’, picking up a ‘Legendary Sword’ that looks exactly like the Buster Sword from Final Fantasy VII with the description “Does it remind you some (sic) past hero” – that can come across as a bit cheap. Also, there’s an ‘Arrow to the Knee’ joke, which would automatically give this game a score of negative four out of ten, if it didn’t have the excuse of coming out in 2013. 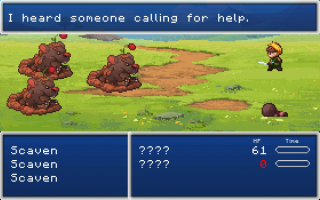 Outside of the upgrades to the game that you can find, the world is littered with treasure chests that usually contain one of two things; bonus stars, of which there are 30 to collect, and 23 cards from the game within a game, ‘Double Twin’, which is functionally identical to ‘Triple Triad’ from Final Fantasy VIII. Every card has a numeric value on its top, left, right and bottom, and players take turns placing them in a 3×3 grid, and if two cards are placed next to each other in any way, the values where they connect are compared, with the highest winning, which turns the opposing card the color of the winning player. Much like Evoland itself, it’s interesting, easy to pick up and very fun, but not particularly deep or challenging, and unlikely to keep you entertained for very long. Also, lifted wholly from another video game.

The best area of the game by far is ‘The Sacred Grove’, as it features Time Crystals which, when struck, change the game from 3D to 2D or vice versa, and several puzzles in the area are based around switching back and forth, as you can only walk over certain tiles in three dimensions, but tiny shrubs you could walk over in two dimensions grow into small, path-blocking trees in three. It’s one of the only parts of Evoland that feels completely original, and while that might come across as an indictment of the rest of the game, ultimately it confirms that beneath all of the references, the developers are more than capable of making a game that is entertaining on its own merits. 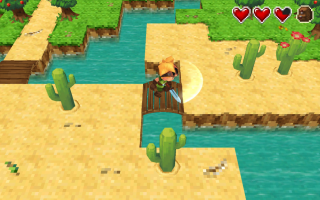 To complete the Zelda references, you find two more items, Bombs and Arrows, which are used surprisingly sparingly; bombs are used almost entirely to find secrets behind cracked walls, and arrows are mainly used in puzzles to light torches, or burn down two-dimensional trees. I’m torn between the game’s length of three to four hours being a little short, even for the asking price of ten dollars, but it allows the developers to get all of their ideas out in the open without overstaying their welcome. The soundtrack, being one of the few things they couldn’t lift directly from another game, is also very well done, managing to capture the nostalgic feelings of adventure, caution, danger and friendship across multiple eras.

There is one major problem though – take away the Final Fantasy and Zelda references, the enemies clearly inspired by other, more famous enemies in more famous video games, and the fact that you have to unlock things like anti-aliasing and faster loading times, and what are you left with? Honestly, an extremely basic and generic RPG that – other than an admittedly excellent final boss fight – is never truly challenging, and can be beaten in the time it takes to watch a particularly long Marvel film. 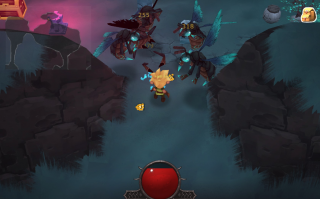 Even if you’re a huge fan of the franchises Evoland pays homage to, the best you can expect is to be reminded of those other, better franchises. And if you’re not a fan of Final Fantasy or Zelda, you probably won’t enjoy playing what is essentially an extended demo of those games. But in Evoland’s defense, all of this criticism only applies if you really have taken away the references and the enemies and the journey through an ever-evolving world intended as nothing more than a nostalgic nod to video games of yesteryear, in which case, why are you playing Evoland in the first place?

It would be undeniably harsh to act as if it’s a notable flaw for Evoland to never quite reach the heights it clearly isn’t aiming for. Judging it for what it is, Evoland is a short, fun, incredibly charming game that it comes highly recommend to anyone with even a mild interest in video game history who has a few hours to spare. And even if you would have fancied a game with loftier ambitions, the story of Evoland still has a very happy ending that confirms the original’s status as a strong base on which to build; in 2015, Evoland 2 was released, and it’s a much more fleshed out 25 hour RPG with its own original – if heavily inspired by Chrono Trigger – time travel story with real characters and plot and repeated trips back and forth from older to newer times, and this time around the game is loaded with extended gameplay sequences harkening to Metal Gear, Fire Emblem, Street Fighter, Guitar Hero, and even Professor Layton. It’s utterly fantastic, and always my first example of a sequel that surpasses the original. 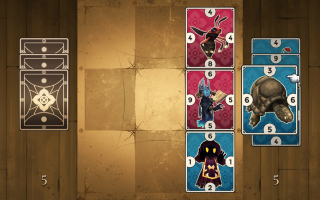 Ultimately, Evoland is a fine game, as long as you’re judging it on its own merits. In February 2019, Evoland and Evoland 2 were packaged together in Evoland: Legendary Edition which brings the games to Nintendo Switch, PS4 and Xbox One. Shiro Games are currently working on Darksburg, a survival action game in the veins of ‘Diablo meets Left4Dead’ and have also released Northgard, a beautiful Age of Empires-style real-time strategy game based around Norse mythology that set with great success. So this isn’t so much “The Evoland people made a strategy game?” as it is “The Northgard people made an RPG?”

But even if they will always be the Evoland people, as Evoland itself proves about the video game industry, it would be an impressive legacy to have.