The highly-anticipated sequel to ActRaiser appeared at first glance to deliver a fantastic combination of familiar elements and new designs. What it turned out to be was a considerable departure from the style of the first in more ways than one, and not often for the better. It’s not to say that this is a bad game, however, it is what Return of the Jedi is to Empire Strikes Back: a sequel that is fine in its own right, but misses much of the magic that made its predecessor so mirthful. 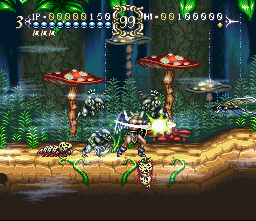 The story is essentially the same as the original, where God/The Master fights against Satan/Tanzra and his army of underworld minions. His main generals each take on one of the Seven Deadly Sins, with each sin playing off of the faults of towns across the land and causing royal chaos. It is unknown whether this setting is placed before or after the first game, or even if it takes place in an alternate universe. All that needs to be known is God once kicked Satan’s ass long ago, but his power grew and he’s challenging the lord again to some bullshit at the expense of the mortal plane of existence. 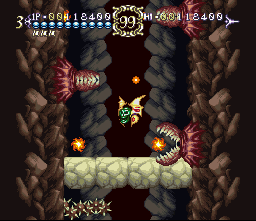 When you first step into the game, you are presented with the familiar structure of a world map beneath a floating palace. An angel informs you of the situation below (i.e., a world of pain and suffering) and you are allowed to survey the countryside at your whim. There are six areas accessible on the overhead map, and unlike the first title, you can go to any of them in whatever order you wish. When you engage in a stage, an angel with a blade asks if you are ready to take human manifest and kick some holy ass. There are also towns that provide information relevant to the plot, if you focus on that sort of thing. If you attempt to check on any piece of land that isn’t important, you will be given a password for the current situation. 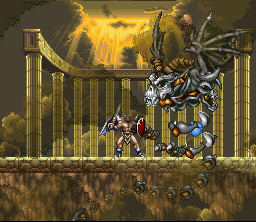 So, here’s the bad news: the simulation scenes are completely gone, with nothing to replace them. Yes, that which made the first game a unique blend of action and simulation totally obliterates the latter to give us merely an action title, and not a particularly outstanding one at that. This is a straight-on reflex-dependent title with nothing to offer for those outside of the truly patient and hardcore, a severe change of design which has alienated gamers who were attracted to the innovation of the original. With this, the save game system is gone too and replaced with passwords. (At least there are at least a couple of neat secret passwords that allow you to fight the versions of Satan featured in the opening cinematic or from the original ActRaiser.) 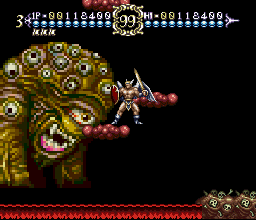 That’s not to say that they didn’t put some effort into it. Visually, the game makes good use of its graphical capabilities. As before, the awesome Mode 7 drop down into the turmoil is liable to extract a puddle of bile from queasy gamers. The environments are significantly more diverse from the first game, ranging from living graveyards to sunken temples, and most interesting of all, the inner mind of a sleeping king. The enemies and bosses are well-designed and animated, given high amounts of detail, shading, and colorization without looking too gaudy or goofy in most cases. In particular, the bosses are fluidly animated and impressive to watch in action. 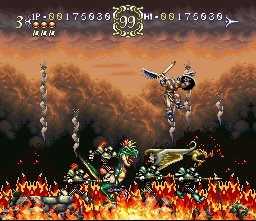 Yuzo Koshiro returns to compose the soundtrack, and the audio quality is noticeably improved from the first game. The sound is more refined and seems to evoke the sense of an orchestra weaving dramatic compositions. However, the actual tracks themselves are not quite as memorable as the outright awesome music from the first game. Personally, the boss themes do not sound as edgy as they did from the original, but they do the job well enough. For the most part, the style generally seems to be concentrated more upon ambiance than fervor. 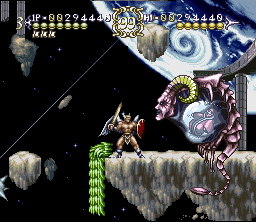 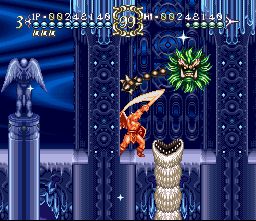 Wearing fairly less than before and showing off a mighty physique, God now has wings that aren’t just for cosmetic purposes. By pressing the jump button in midair, you perform a glide with the wings that flies you through space and brings you down to the ground with an annoying skid during which you can do nothing. However, pressing down in mid-flight causes you do take a fast dive with no skid, and holding up causes you to slowly float down and carefully land. The flight mechanics can be somewhat frustrating to control, but it does somewhat accelerate the slow pace of God’s gait. There are a few points in stages where you have to land on platforms from afar, and if you don’t hold Up to stop your dive, you’ll skid right off the edge and into an abyss. This is more a fault of poor design than a legitimately penalizing mechanic in my opinion. 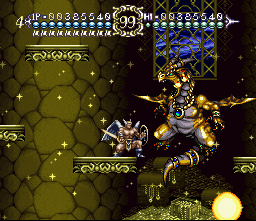 Armed with a sword as before, you now have a shield to carry and defend against enemy assault. Instead of a top-down swing that can hit most enemies low to the ground, the attack while standing is now a straight side swing. You can also hold up to slash diagonally above, but it’s a bit more of a pain to hit enemies with a reduced hitbox. You will have to do more crouching than in the original ActRaiser to hit enemies low to the ground, yet the jump slash is top-down like old times. Other midair attacks include the ability to slash straight while gliding forward, holding down and attacking during a jump to perform a downward thrust, and a flying crash during a downward dive that does double the damage of all other attacks. It can be a bit hard to pull this last attack off consistently; an unfortunate mechanic, as even the smaller enemies can take multiple hits on higher difficulties. 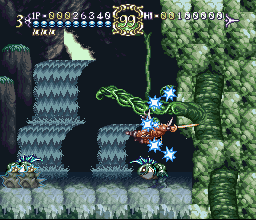 As for your shield, it can repel all projectiles, but the hit detection is frustrating due to the shield’s small size. It’s not so bad when you can just stand or crouch to defend fireballs hurtling towards you from the side, but the problem is apparent when holding up to block falling projectiles. Raising your shield above your head does not guarantee protection from anything that does not hit the non-shielded portion of your body. 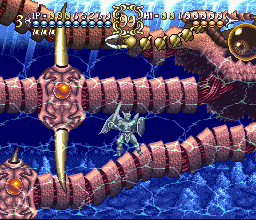 In addition to an arguably gimped God, the enemies attack with greater fervor than in the first game. They take more hits, they come in greater numbers, and their attack patterns are far more obnoxious than ever before. These reaper bastards from a dungeon-style level are especially notable, attacking as the cheetah strikes a slow buffalo (i.e., you). To quickly kill stronger enemies, you have several magic attacks at your disposal that can be performed by holding the Y button and releasing as you glow red. The type of attack depends on what position you are in as you release; standing delivers a flamethrower attack, looking up launches spherical bombs, crouching brings a shield of earth energy around you, jumping summons four diagonal electric sparks, gliding shoots out a large projectile that splits into smaller ones on impact, floating causes a lightning bolt to blast from above, and diving downward surrounds you with a fiery phoenix. While powerful, you only get so few to use, and they are best saved for the level bosses, most of which are real bitches to fight. The one that wracks me with the most pain is the volcano boss, where the screen perpetually scrolls upward on infinite disconnected platforms while the bastard flies around blasting fire everywhere. The structure of the stages range from reasonable to infuriating, with the latter case prominent in Industen, the stage closest to your starting point and allegedly one of the easier levels.

Actraiser 2 is pretty good, it’s hard not to be disappointed with the end result. Still, taking it at its basest value, what we have here is a straight action title that, if nothing else, stands alone as a challenge that badgers the edge of utter frustration. Many were disappointed with the drastic direction taken in altering the gameplay to appeal only to hardcore action gamers. It does offer appealing visuals, keen enemy design, and fine sound quality, but it is a letdown as a successor to one of the flagship games for the Super Nintendo.