Imitation is the sincerest form of flattery. Geez, how many times have you heard that one before? It’s a hoary cliché to say, but said cliché persists in the world of video games for a reason. Sometimes, games are clearly derived from a base formula that’s been done before, but oftentimes, these games do enough different to distinguish themselves from their parent. For example, whereas Nintendo had The Legend of Zelda, Sega got Landstalker, which was the same premise as Zelda but set in an isometric perspective. There are some game designers who take the effort to set themselves apart from each other. On the flipside, there are those which make the minimal effort to stand out from the crowd and come off as shameless clones of the highest degree. They can come from any venerable developer, like the reasonably popular Sunsoft when they collaborated with Sega to make Bay Route. Suspiciously sounding akin to “Beirut,” the capital of Lebanon, Bay Route is not a bad game, but it slams through the barrier of derivation enough to constitute borderline plagiarism. 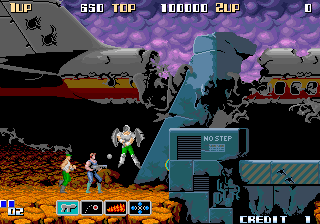 So let’s just get this out of the way without any pretensions: Bay Route is Contra. No, really, it’s the Contra game Konami never made. It plays like your standard run-and-gun, but there’s just so much about its atmosphere that feels Contra-esque, especially in the first two stages. They particularly feel like the first level to the arcade Super Contra, what with the ruined cityscape and the gloomy sky. The first boss is a large armored wall with several turrets and a core/gate you need to destroy to pass it. This may sound familiar to anyone who’s beaten the first level of Contrabefore! Infinite mooks rush in at you from both sides of the screen, and your gun’s ammunition is equally infinite. Unlike Contra, you seem to be dealing with human terrorists instead of alien invaders, but the basic premise is the same: Move and shoot anything else that moves! You appear to be some commando named Tom if the Engrishy opening text is to be believed (with player two being a nameless female soldier), and your mission is to “infiltrate the enemy airtrip and find safe passage to the Embassy.” It involves saving hostages from unscrupulous baddies which is as basic as you can get for an action plot, but you certainly don’t need much more to go on than that.

You get four weapons in a system ripped off from another game, this time Ninja Spirit by Irem. You have your basic bullet gun that fires almost as fast as you can mash, grenades which can only be rolled while crouching, a short-range but powerful flamethrower, and a super shot with a slow fire rate which breaks into four smaller shots on impact. You’ll likely be sticking with the normal shot for most of the time, although the flamethrower and super shot do have their use (with the grenades being mostly useless). You’ll be rushed nonstop by enemies in all levels, most of which are unarmed, some of which have guns, and some of which are clothed in red and drop power-ups when killed. Purple capsules can actually bolster your current weapon, such as turning your normal shot into the bloody ContraSpread Gun. It’s also the only weapon which can be powered up twice, giving you three shots per fire and then five for the second boost. Powered-up grenades become less worthless as they can be fired in any direction, the flamethrower gains considerable range, and the super shot’s aftereffect swirls out and causes more damage. However, good luck holding onto your boosted weapons for too long, as you will be mowed down before you have a chance to exhale individual puffs of carbon dioxide.

Anyone who reads this may scream if they hear the word “Contra” one more time, and that’s understandable, but Bay Route is one of the more flagrant derivations of Konami’s classic run-and-gun formula. This includes the staggering difficulty that often comes with most Contra games, though Bay Route is arguably less merciful. You can continue as long as you have the proper credits, but you’ll probably have to spend a credit or two just to beat the first level. This is despite being able to take two hits, although your life meter stupidly doesn’t restore if you lose a life and you’re much more likely to die if you already died once. Blue power-ups give you one more notch of life and green ones actually refill a point of life, but this is primarily moot unless you can hold out long enough to somehow build up your life bar. Bay Route isn’t too lengthy; there are seven levels all in all, with a sidescrolling shoot-em-up taking over for the first half of the fourth stage. It doesn’t take too much time to beat, but it may take more quarters than minutes to do so. It also has a unique boss to be faced at the end of each level, some of which are breezy (the standard worm-like boss at the end of stage 2) and others of which are infuriating (like the rectangular stage 3 boss whose reluctance to expose its weak points makes it take ages to kill). 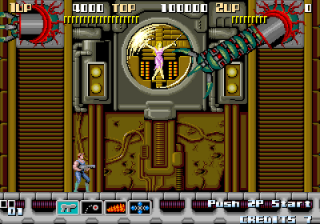 Take Bay Route for what it is – a straightforward action-platformer where you shoot a lot of baddies – and you’ll likely have a good time. Its credit-feeding difficulty may not cater to everyone’s satisfaction, but it is at least a neat game to look at, with alternating bright hazy skies clashing with wasted landscapes and sterile mechanical bases. Sunsoft always knew how to make their late eighties releases look admirable if nothing else, but the sound design in contrast is decidedly forgettable. It’s nothing offensive but nothing as catchy as Contra‘s sound team. Oops, there I go again mentioning Contra. Sorry, but it’s absolutely unavoidable. Bay Route is perhaps a more obvious clone of Contra than Run Saber is of Strider. Of course, if you derive from any structure, might as well make it a time-honored game with a long-standing legacy. Contra is Bay Route‘s legacy, and though Bay Route is ultimately overshadowed by its genuine forefather, it’s still a competent action game that does nothing special but is still a fun romp through a grim wasteland set twenty minutes into the future.