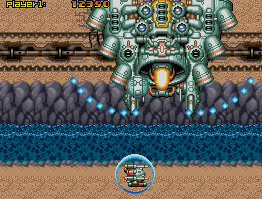 Aurail is a tough game to get used to. It’s an overhead run and gun, much like Ikari Warriors or Commando or Heavy Barrel, except instead of a soldier, you control a walking tank called a Transom. You can walk forward and fire as normally, but you can also stand in place and rotate, allowing you to fire in eight directions. However, there are no strafing controls. It’s one of those design quirks that seems like it might have been an oversight, and it may have been, but in practice it works in the game’s favor – like the original Castlevania titles, whose stilted jumping controls and limited attack movements defined the game, Aurail‘s controls are essential to both the tempo and strategizing required to conquer it. 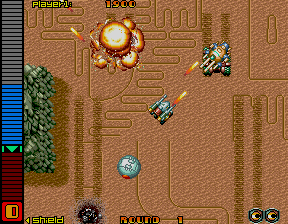 And conquering it is a masterful feat. Aurail begins off rather challenging, at least for the first stage. By the fourth stage, it gets to get reasonably difficult. By the seventh stage, it means business, and that’s not even the halfway point. It utilizes a punishing checkpoint system, where a single death will set you back only a small distance, but an immediate second death will send you back even farther, potentially to the beginning the stage. Every inch of ground is a hard fought victory, which can easily be snatched away. 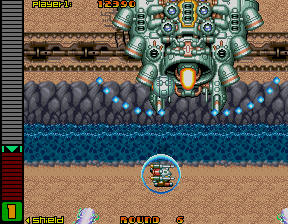 While often frustrating, being able to learn and relearn the terrain is essential. Like R-Type and its ilk, being able to memorize when and where enemies appear is one of the major keys to victory. While the goal of the screen is to move upward, you can also scroll the screen to the left and right a bit, but offscreen enemies will not attack. 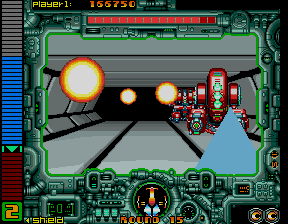 More important is being able to identify the enemy’s weakpoints. Missile launchers, for example, will usually overshoot you, while their homing capabilities will track you from behind, giving you an opportunity to shoot them down. Laser turrets are limited to the same eight-way directional limitations as you are, so it’s just a matter of finding their blind spot and firing until they die. This is obviously much harder than it sounds, because there are usually plenty of bad guys attacking at once. You can try to take it slowly, but destroyed turrets will regenerate and smaller enemies respawn constantly, so there’s always a balance between knowing when to advance carefully or to charge forward full speed. 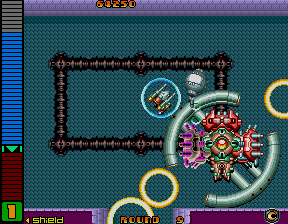 There is also a unique power-up system at work. Many fallen enemies will drop “P” orbs, which will grant you three charges on a power meter. There is also a “D” icon, which gives you command of an orbiting satellite called a Kite. At any moment, you can sacrifice 12 charges to create a shield (which stack up to three times). Alternatively, you can command the Kite to attack, which will quickly drain the power charges but allow you to attack while remaining safely under cover, or at least let you deal with multiple foes at once. Again, there’s a careful interplay of prioritizing offense over defense, or vice versa. The game is generous enough to start off each new life with enough power charges to generate a single shield, but assuming you die a lot – and until you spend hours practicing, you will die a lot – it’s hard to keep the meter charged high enough to be all that useful. Granting a few more charges per “P” orb wouldn’t have hurt in evening up the odds a little. 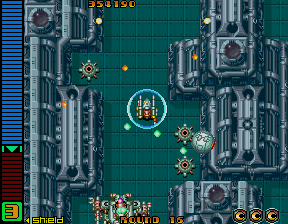 Aurail‘s stages are broken up into three sections – the first and third are 2D overhead areas, culminating in mid-boss and large boss battles respectively, while the second stage is a 3D tunnel area. In these corridors, you move forward automatically, and can shift left and right between three columns, while collecting P icons and dodging mines. At several points, enemies will attack, and you will stop to engage. At this point you’re free to walk up and down the tunnels in order to destroy everything. While the shield generation works the same as the overhead levels, there is no Kite, so instead this button is used to turn your mecha 180 degrees, so you can defend yourself from behind. There are small indicators that show the location of attacking foes, as well as onscreen text to keep track of the remaining enemies. 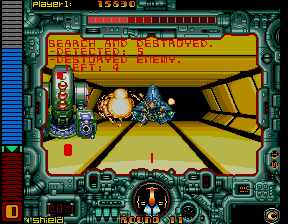 The 3D sections take awhile to get used to, perhaps even longer than the 2D sections. While some knowledge of overhead shooters will help you get through those levels, the 3D stages are entirely unlike anything else. The trick is to pay close attention to the indicators, which is the only way to grasp where everything is located. These sections are also overly tough because your tank is just as weak is in the 2D levels. Thankfully, only bullets actually damage you, as enemies can collide into you without any penalty. 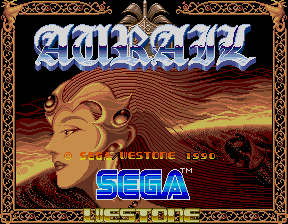 Aurail was designed by Westone, which is generally known for its fairly cute and cuddly Wonder Boy / Monster World series. However, in keeping with the science fiction war theme, the visuals in Aurail are much darker. The spritework is decent, though it really shines in the 3D segments, where it’s easier to see the details, and the boss fights, which consist of gigantic, segmented machines of pure destruction. 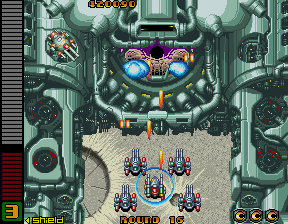 Amidst the futuristic imagery, though, there are occasionally ancient looking ruins, which, along with the fantasy-styled woman featured on the title screen, give it sort of a mythological feel. There’s even a made up language that kinda sorta looks like English, and a cryptic robot voice that says various vaguely intelligible things. The music is heavy metal played through the System 16’s FM synth – harsh, but undeniably catchy and thematically appropriate. It was composed by Westone mainstay Shinichi Sakamoto. It can be purchased online at Project EGG Music, or is available on the Sega System 16 Complete Soundtrack Volume 3. 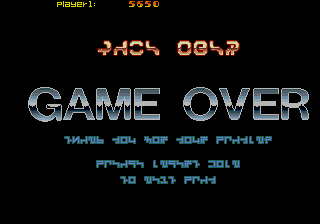 Game Over – Thank you for your playing.
Please insert coin to next play.

Despite its quality from both a design and an aesthetic standpoint, Aurail didn’t receive much exposure, leaving it unported outside of the arcades. It is the epitome of old school arcade design – difficult to learn, even harder to master, but like all of the best titles, with persistence comes the reward of victory, and Aurail is as good as any. 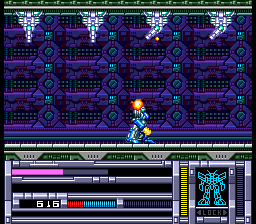 The 1994 PC Engine game Blood Gear – published by Hudson but developed by Westone – identifies itself as “Aurail Scenario 2” in the ending credits, implying that it’s meant to be a sequel. The story has some very vague connections, stating that some characters are “people from Aurail“, and the stage one theme makes a cameo.

However, according to company founder Ryuichi Nishizawa, it really isn’t a true sequel, just more likely some amusing connections inserted by some of the other staff members, since he was not heavily involved in its production. They both have science fiction themes, of course, but Aurail is mostly about robots and walking tanks, while Blood Gear focuses on larger, Gundam-style mechas. Aurail is also an overhead run-and-gun, where Blood Gear is a side-scrolling action-RPG, similar to Square’s Front Mission: Gun Hazard, so they play nothing alike. 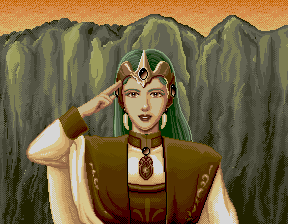