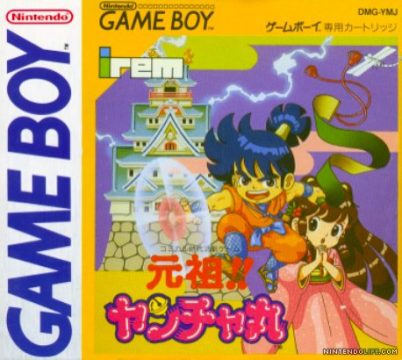 Despite appearing on a portable platform, Ganso! Yanchamaru for the Game Boy is a much more appropriate successor to the original arcade game than either of its two Famicom sequels. It’s a whole new game rather than a port, with twelve levels spread over four different worlds. The mechanics are very similar, although obviously scaled down a bit, and the spinning blade has slightly longer reach. The level designs feel a bit more like Super Mario Bros., complete with breakable blocks which will occasionally drop items. Most of the time you’ll simply get coins (which will eventually grant you an extra life), but you can also get a limited supply of throwing shurikens, as well as scrolls which grant invincibility. It’s still quite a bit easier than the arcade, although it still remains challenging in parts. 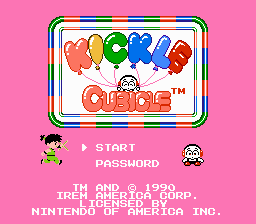 Kid Niki also makes a cameo appearance in Kickle Cubicle, another NES game by Irem. Hold down the A button on Controller 2 while starting the game, and once the title screen shows up, he’ll appear on the left side twirling his blade. Although the series effectively ended after the 8-bit era, Irem’s Hammerin’ Harry is very similar, right down to its fast paced action and single hit kills. It moves the setting to modern day Japan although still maintains much of its silliness.