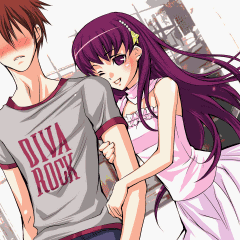 As a company, SNK has had one hell of a history. Beginning in the way early 1980s, they found moderate success as an arcade developer with games like Psycho Soldier, POW and Ikari Warriors. As the 90s came about, so did the Neo Geo, and SNK developed a lust for fighting games. The years crept on, and while the gaming market evolved, SNK did not. They died at the end of the millennium, only to be reborn a few years later as SNK Playmore, then finally reclaiming the SNK name. Since then, they’ve been fighting the good fight, recapturing much of the spirit of the old SNK, even if their output isn’t nearly as high as it was in the glory days.

The dating sim is a bit blurry to most non-Japanese gamers, because they’re almost never localized. Days of Memories is not a simulation game like Tokimeki Memorial, nor is it a straight visual novel like so many erotic PC games that swarm of the shelves of ever on the upper levels of every anime store in Akihabara. Still, the gameplay – if one can call it that – is quite simple. Every day, you wake up and chat with some of your friends. In the middle of the day, you’re given a map of the town. Thanks to some kind of crazy super stalker technology (in the third game and onward), you’re given the exact location of each of your potential suitors, where you can drop in and chat. Most of the scenes begin the same:

You: *enter scene*
*screen vibrates to indicate bumping into someone*
You: Ah, Mary-san, what are you doing here?

The writing and scenarios are, of course, pretty bad. The whole thing is essentially an interactive self-insertion fan fic, and as much as the artwork is kinda pretty decent, there’s no part of it that doesn’t feel a little bit awkward. It’s hard to say whether it’s totally sad or totally amazing that Japanese companies like SNK will cater to their fans like this.

Anyway, a huge chunk of these “adventure” just involve reading – occasionally there’s some minimal user input when you need to respond to a question, but that’s about the gist of it. After a set number of days, the game ends, and you’re presented with a quiz before you can successfully “win”, where you’re rewarded with a brief epilogue. Each character usually has very specific win conditions, requiring that you show up on the right time and say the right thing, or else you’ll end up with some generic (or worse, heartbroken) finale. The crux of the game revolves around discovering each of the paths, and playing through multiple times to see all of the endings. There are also a variety of special cutscenes triggered by specific events – the goal is naturally to unlock all of them. Most of these scenes are fairly innocuous, with a small number of total cheesecake shots. It even does the courtesy of sidestepping any pedo issues regarding the younger characters – for instance, when you “win” with Momoko (the girl from The King of Fighters XI), you end up taking her to a rave, which is a welcome step up from the “loli witch touching” in SNK’s own Doki Doki Majou Shinpan.

The big draw, of course, is that each of the games stars a number of SNK characters. Each game stars at least a half a dozen heroines (and, in the case of the fourth chapter, heroes), from a whole ton of different SNK games, including The King of Fighters, Metal Slug, Samurai Shodown, Last Blade, and others. Like many other dating sims, one of the biggest draws is seeing the characters in other outfits – you get to see King in a classy dress, or Mai decked out in full ninja gear, or practically all of them in either swimwear or sailor uniforms. Their roles have been altered slightly to fit in the universe – for instance, Kula is introduced as K’s little sister, and so forth.

It’s also particularly interesting in the way it melds the cast of the Maximum Impact series. Since the beginning of the series, each entry in The King of Fighters had carried some unique distinction due to its artist. This was mostly lost in the Maximum Impact games – even though the characters were designed by Falcoon, one of the many SNK regular artists, all of the ingame and manual artwork were CG renders, leaving them at a great distance from their 2D cousins. One has to wonder how well these flamboyant newcomers would fare in a sprite form (probable answer: pretty well, as least when stacked next to recent characters like Ash), but Days of Memories features these characters – Luise, Mignon, Ninon, Alba – with hand-drawn artwork, which is refreshing to see.

There are nine chapters in the Days of Memories series. Each of these episodes were originally designed for Japanese cellphones, but many have been ported to the Nintendo DS. The first Days of Memories DS release contains chapters one through three; the second release contains chapters four through six; and the third has seven through nine. The DS versions include nicer graphics due to the greatly expanded resolution, as well as a slightly better interface, but it’s still nothing too fancy. 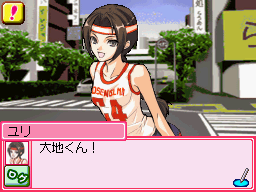 The first chapter (translates to “Me and my Girlfriend’s Hot Summer”) takes place in a standard generic high school setting, and it sets down the locations used in a few of the other games, including Neo Geo Land, the arcade. This one stars Athena, Kasumi, B. Jenet, King, Mai, Yuri, Leona and Kula, in addition to a new male character, Kyoya. The illustrator for this volume (as well as volumes 2 through 4) is Kagero.

In the second chapter, you star as a college student with his own bachelor pad. This one stars Hotaru (who plays the token little sister character in a somewhat creepy manner), Kisarah (from Agressors of Dark Kombat), Fio (from Metal Slug), Chizuru, Mature, Blue Mary and Athena (again). There’s also a new character at the forefront – Shizuku Misawa, a red eyed, white haired girl who works as a bartender. Rugal, Goenitz and Orochi also make appearances. 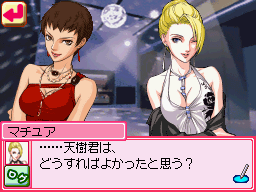 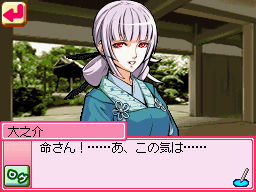 The third chapter is one of the most interesting, because it takes place in feudal Japan and mostly stars Samurai Showdown characters. These include Nakoruru, Mina, Shiki (from the arcade 3D titles), Iroha (from the sixth game), as well as Rinka, Saya and Mikoto (all three from the awful Warriors Rage game.) Charlotte got the shaft, apparently, but more importantly, where’s Cham Cham? There are also two original characters, Shino and Chiyo. Shino is the only dateable one, who helps run the inn and also dresses in a ninja outfit. Haohmaru, Genjurou and Ukyo make appearances, in addition to a new character, Kyouemon. 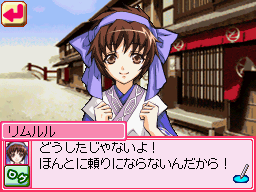 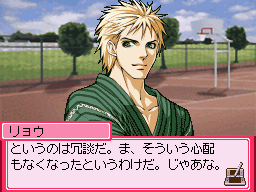 The fourth chapter turns the tables, and is essentially a “girl’s side” chapter, as you take on the role of a female trying to chase down the men. Every once in awhile you can choose from one of two pieces of clothing to help increase your chances. The guys include Kyo, Iori, K’, Ash, Terry, Rock, Alba, and Ryo. You’re also accompanied by your female pal Kaori. Interestingly, in most dating sims, the male character’s face is never revealed since he’s meant to be a cipher. Here, you’ll see your in-game counterpart in a few of the CG scenes. 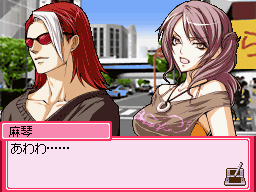 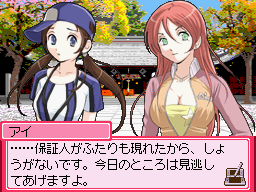 The fifth chapter focuses on the characters working their everyday jobs, as you play a photographer scouting for models. These include Kisarah, King, Kasumi, Mai, Ai (from Neo Geo Battle Coliseum) and Athena. It also includes a new girl named Karen, who seems to be the same girl that you play as in the fourth chapter, and Shizuku, a pet trainer. Geese and Krauser also show up, decked out in fancy business suits, as well as a new guy, Hideki. The artwork for the fifth and sixth chapters is provided by TONKO, also known as Aki Senno, a long time SNK artist who’s mostly known for Metal Slug illustrations and various covers for the Neo Geo Online Collections. 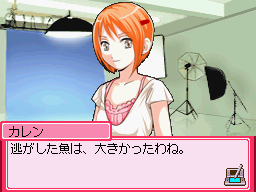 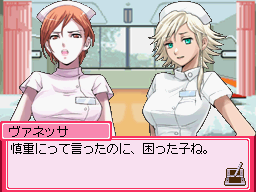 The sixth chapter puts you in the shoes of a hospital patient, as various characters tend to your injuries. These include Ninon, Mignon, Luise, Malin, and Momoko. Alice Garnett Nakata (who was first introduced in some Fatal Fury pachislot games as a spinoff of an cut character named Alice Chrysler from Fatal Fury 3, and finally made an appearance on The King of Fighters series proper in KoF XIV) and Vanessa also show up as nurses, while Elisabeth takes on the role of your attending doctor. Additionally, there’s a nun named Ayame Ichitsuka and her little sister, a creepy mask wearing girl named Tsugumi. It’s pretty amazing that the Japanese think nuns are sexy, and the fact that Alice gets away with wearing that absurdly revealing outfit in church is also pretty hilarious. Kaoru Watabe, the fan of the Psycho Soldier team who appears in a few of their King of Fighters endings, also makes a brief cameo. Shion and Magaki make some rather threatening appearances appearances too. In the bad ending, you get captured by them. 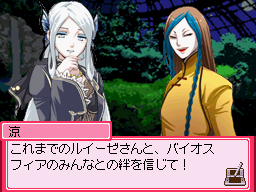 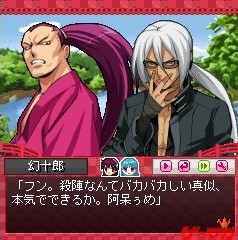 Boku to Kanojo to Koto no Koi (僕と彼女と古都の恋)

The seventh chapter casts you as a member of Iori’s band, with younger versions of most of the characters, including Athena, Leona, Kula, and Angel. Whip shows up as a teacher. Also new is Tsunami, who was originally introduced in that Iroha maid game for the mobile phones and DS, as well as a green haired girl named Misato. Kojiroh and Setsuna from Last Blade make an anachronistic appearance, along with Haohmaru, Genjurou, Ash, Kyo, and K’. 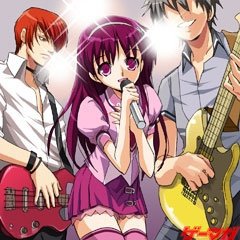 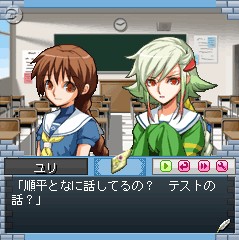 The eight chapter borrows the schoolyard setting of the previous game and is set as the first chapter of a two part subseries. Characters include Mai, Yuri, Mina, Xiao Lon (Duo Lon’s sister, introduced in Maximum Impact Regulation A), Nakoruru, and another new green haired girl named Haruka, in addition to Geese Howard as the school principle.

The ninth and final chapter continues from the previous entry, and features Athena (yet again), Rose Bernstein, Hotaru Futaba, Hibiki, a different Athena based off her original mythical arcade game, and Gato from Mark of the Wolves.