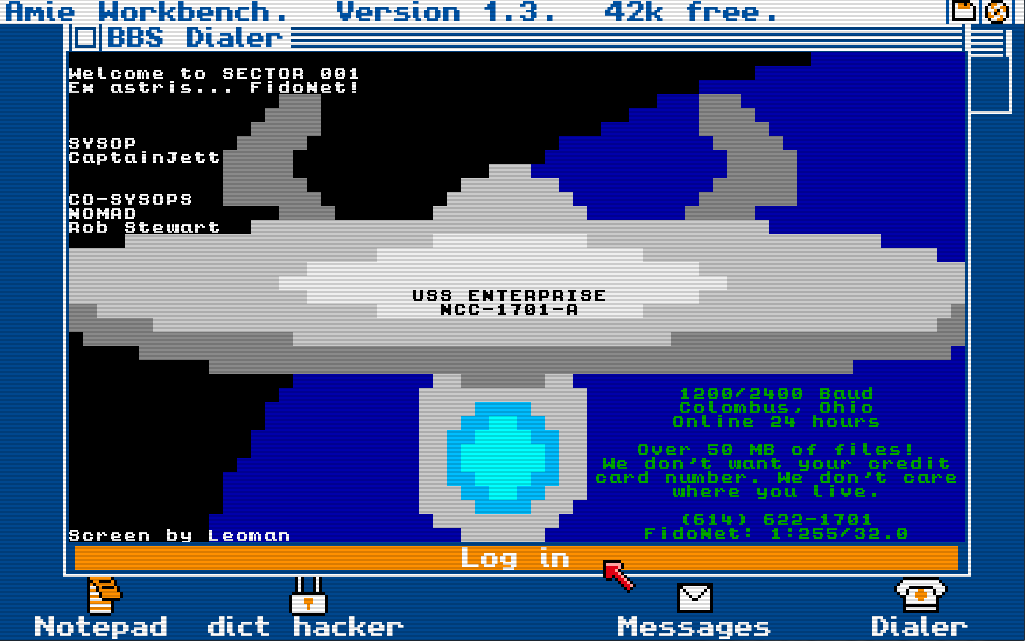 The great thing about the rise of indie gaming is that it has brought different voices into gaming we may never have heard otherwise. Christine Love, owner of Love Conquers All games, is probably the most extreme type of different this medium can get. The Canadian stationed writer and web designer entered game development in the past few years by experimenting with visual novels, bringing her passion for anime in a way not seen before in a genre saturated with the subject and style. Her ability to write about sexuality and love in her both mature and immature way has given her an interesting place in the indie gaming scene with just a handful of games to her name.

She’s openly a lesbian, and is notable for not only how her works explore how technology affects our lives, but also exploring themes of love, prejudice and how people communicate with each other. Most of her works explore how we see modern relationships through the filters of social media and computer gaming, all with a dash of manic joy and crushing, grim sincerity. Most of them set themselves apart mechanically by having the player navigate computer interfaces. They’re certainly interesting games, and they’ve gained a lot of fans among indie gaming websites and communities.

Love herself is interested in creating games that are the antithesis of the modern power fantasy. Instead of growing a spine and taking down a great evil, her games are more about people allowing themselves to become vulnerable and become close to someone else, or in her own words, cuteness. She wants to make games that explore emotions beyond triumph, and she’s been doing just that for years, attracting a growing cult following in the process. This focus sets her apart from normal visual novels (which she’s an outspoken critic of), avoiding relationship systems based around choosing the right option to earn points in a given story path. Instead, her games are more focused on inspiring a variety of emotions from the player beyond simple satisfaction in a good story, aiming to suck the player into the world presented before them through intimate set-ups that deal with issues closer to ones that may very well happen in the world today, no matter how fantastical the setting is.

While she’s done a few small projects and has contributed to a few other games produced by other parties, the games she thought up and made with her various contributors at Love Conquers All games are all vastly original and fascinating in their own right. Even among other visual novels, these games are so radically different that almost nothing else can be considered like them, even if similarities are there. 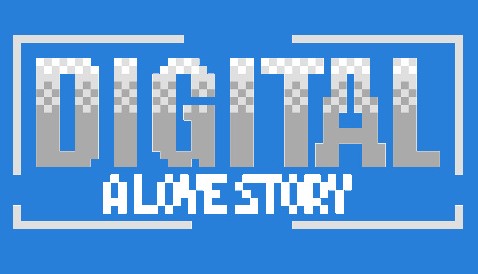 Digital was Christine Love’s breakout game, the first of her works to be played by thousands of people instead of just a few dozen. It was not originally supposed to be a game, and Love didn’t consider it a game until people who played it started calling it one. In a sense, it’s the most “on-rails” game in her resume. Despite this, its set-up was so different from most anything at the time that it instantly attracted a heavy amount of attention and praise (although much of its design was based on the obscure 2001 game Uplink).

Digital begins with you, the player, being asked to pick a username and give your real name, then throws you right into the game. Digital plays out entirely from the monitor of a faux-Amiga computer called an Amie Workbench, and all actions you perform are done through typing keyboard commands and clicking on icons, as you would with your own computer. The game has you exploring the late 80s internet by browsing BBS (Bulletin Board Systems) forums, joining conversations and talking with other users through private messaging. Talking and browsing eventually gets you useful programs like Notepad, which records important information, and a password decrypter. The game even lets you play around with hacking through long distance phone codes that let you go on sites out of your area. There’s no real goal at start; you simply browse whatever forums you can find and play around with the toys you start amassing. 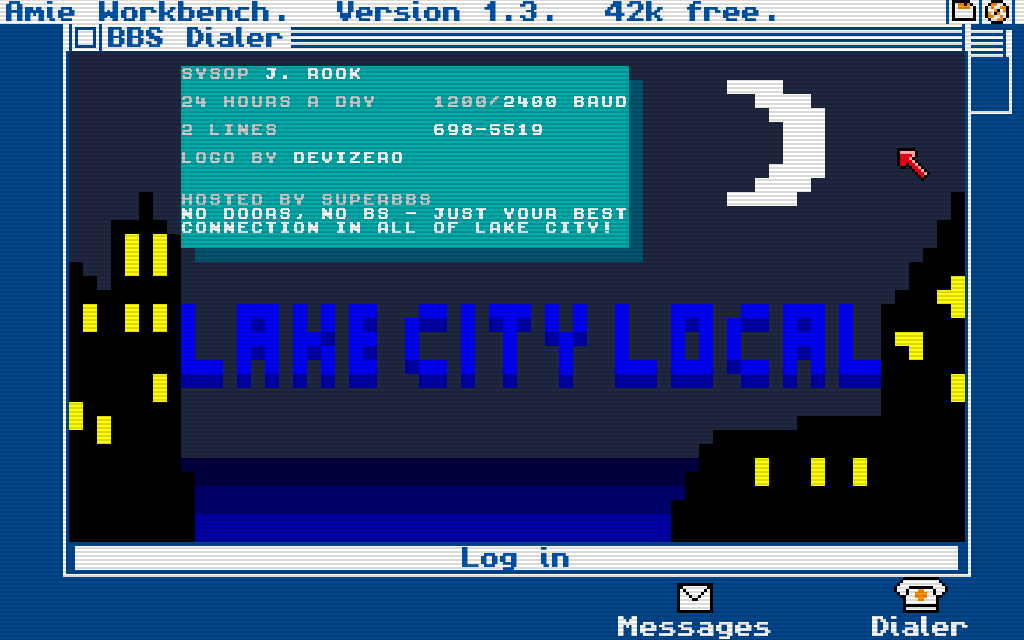 The key character that starts the story proper is a user under the username “*Emilia.” After responding to her request for criticism on a poem she wrote, you can start replying to messages from her and begin to grow a connection as she starts opening up to you. Eventually, after she says she’s taken a major step in her life, the site you have to connect to in order to talk with her is utterly destroyed, replaced with glitchy code. This is where the game starts proper with a set goal; find out what happened to *Emilie through whatever forum you can find by any means necessary. The plot ends up being far bigger than it initially appears, with even the birthplace of the internet itself becoming involved in the climax.

How Digital moves its story is interesting. It turns browsing internet forums into a surprisingly engaging activity by adding a personal stake, and it uses hacking to give a greater feeling of action. Hacking into a site is always a multi-step process, requiring you to discover information on the password system, using codes to abuse the phone company’s system to reach long distance forums, and typing in the proper phone number for a given forum. It can be a tad monotonous if you get stuck on a section, but it’s a interesting and effective mechanic otherwise. The dialog system, however, is non-existent. You never see how your character responds to another character, but you can pick up on a general idea by the context of the response. Your character is mute, but still given a personality from how others react to you and your own interpretation of the actions you commit. This style of storytelling doesn’t always work, but it does feel like that old school game narrative style fits with the old tech presentation. 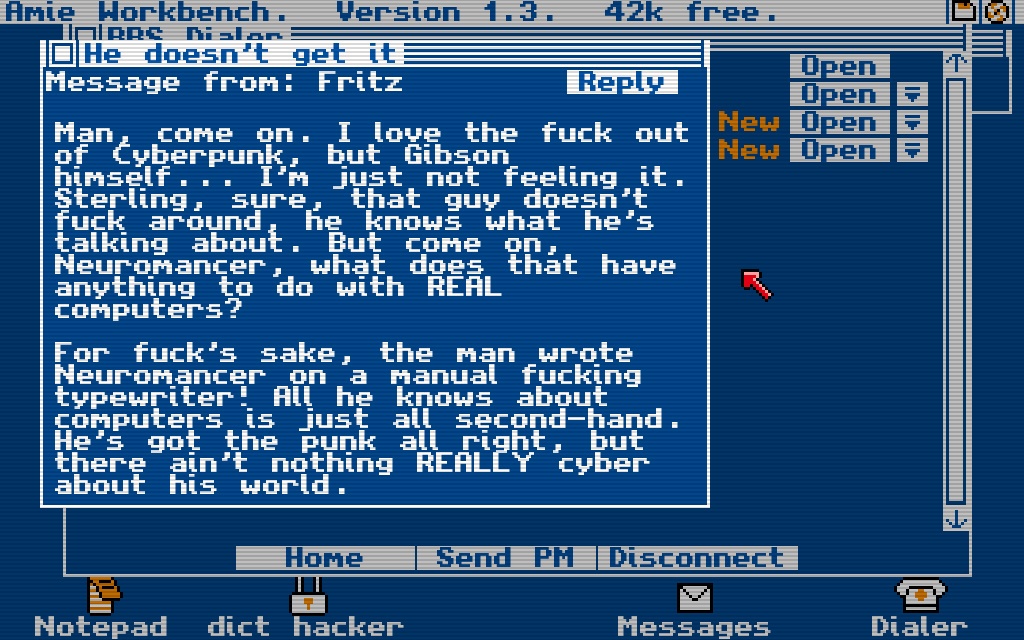 The writing itself is very strong. The dialog in the forums feel like direct quotations from other popular internet forums in the modern day, like finding someone complaining about Captain Picard from Star Trek: The Next Generation, or people having arguments over radically incorrect predictions of the future. A few characters even use outright awful grammar or ramble on and on with large words that have no substance, giving a good bit of humor during the dull moments. You can eventually speak with A.I. characters later on, most sounding vaguely human, but stiff enough to pick up on their imperfections. That’s difficult to pull off in just text dialog, but it’s done near perfectly here.

The game is a wonderful way to spend two hours or so, but it carries some issues from the point and click genre. It can be easy to get stuck at a few points, especially when trying to get into a library site for information. However, it’s closer to new point and click sensibilities, as the answer is always looking you in the face. Only downloading particularly important messages instead of any you can find really helps keep the game chugging along. If it’s related to programming or hacking, download it. 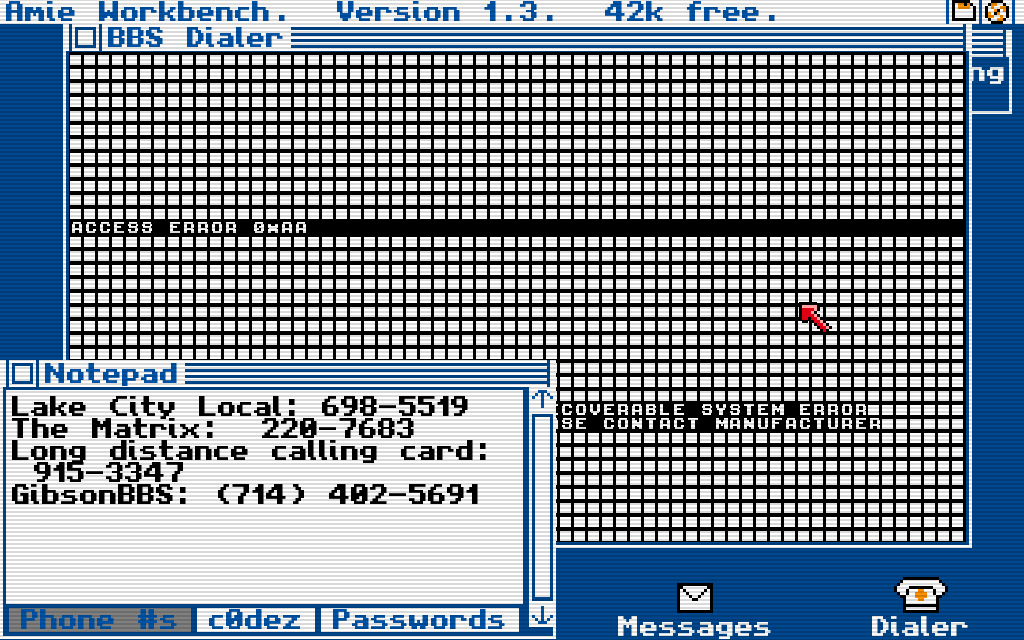 Digital is a free download from Love Conquers All’s official site, and it can run on even the most under-powered machines. The fresh presentation of the game and its wide availability caught it a ton of attention from various indie gaming websites and a few major publications, leading to it be downloaded by thousands of people. It ended up being the stepping stone to three spiritual successors as well.