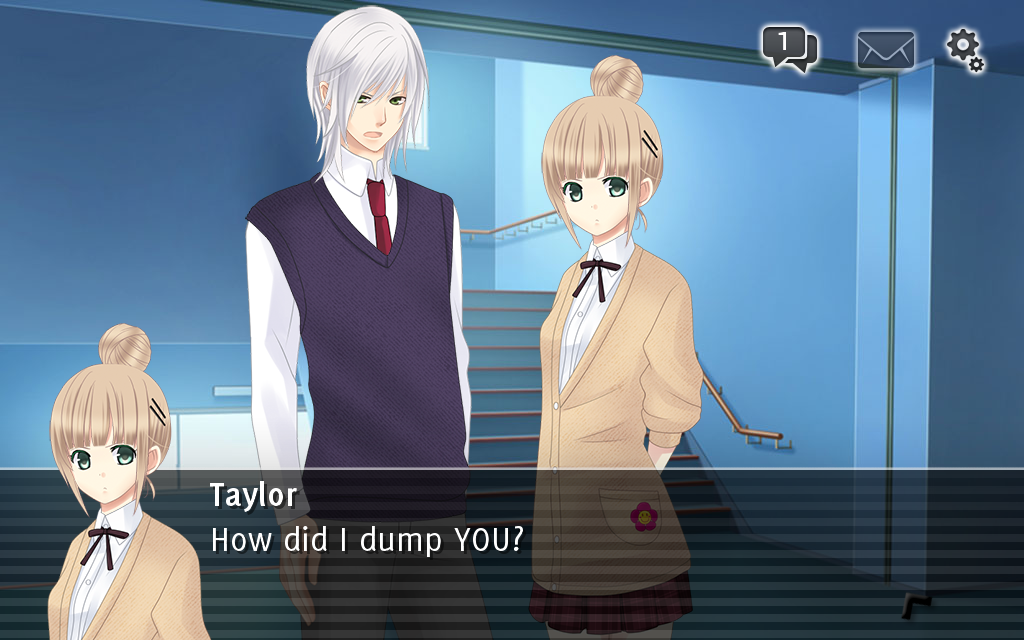 don't take it personally, babe, it just ain't your story 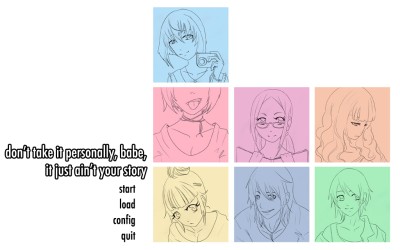 Love’s second success was yet another free download game, and one made in the span of a month for NaNoRenO, a challenge to make a visual novel in just thirty days. It’s hard to believe the game was made in such a short time, because it stands up well to this day. Don’t take it personally is a very meta visual novel about a teacher named John Rook trying to teach a high school English class, with double duty helping his students in their personal lives. The game’s twist is that it takes place in 2027, and the school has given Rook the ability to look at all messages students leave to each other on a social networking site called AmieConnect. As a result, he’s the most informed person on what’s going on with all the students in class, which brings up ethical ramifications.

An English teacher who used to work in computers and has gone through two rather bad divorces. He’s sarcastic and filled with self loathing, and may be the son of a minor character from Digital: A Love Story with the screen name “J Rook.”

A young girl who grows a crush on Rook within the first chapter. She is the source of most of Rook’s worries and frustrations early on.

The class goof and tomboy. She normally calls people “bro” or “sis,” and has had some sort of falling out with Charlotte before the game’s start.

The class bully. She constantly types out homophobic slurs and is obsessed with her ex-boyfriend, Nolan. She’s also friends with Arianna and Isabella.

The smartest person in class and a good friend of Isabella and Akira. She’s also the only person who answers Rook’s questions at start. She had some sort of falling out with Kendall before the events of the game.

A silent girl whom usually hangs out with Charlotte and Akira during lunch, while discussing love with Arianna on AmieConnect. She appears to be the most balanced person in the class. At least, at first…

Taylor’s ex-boyfriend and an overall timid guy. Well, in real life. On AmieConnect, he’s commonly found complaining about how boring class is.

A half-Japanese boy with two eccentric mothers. He’s friends with Charlotte, Isabella and Kendall, and wants Charlotte and Kendall to make up so he can talk normally with them again. He has a habit of speaking in groan inducing text speak, so when he starts using proper spelling and grammar, you know something has just gotten serious.

One of Akira’s mothers and the daughter of Eriko Yamazaki, a sci-fi novelist who briefly appeared in Digital: A Love Story. She’s very strict about her son’s well being, as Rook unfortunately learns later on.

A mysterious girl who seems to hate Rook…

Don’t take it personally is a sort of spiritual sequel to Digital, and it shows. The game is loaded with references, including characters directly from Digital and a cute continuity gag if you happen to have a finished save of Digital on your computer once you reach the end. On the surface, it’s a radically different game than Digital; most of your time is spent talking with students, and you play a huge role in all their lives. This is pretty stark contrast to the lonely hacking of Digital, but the presence of AmieConnect gives the game an anchor to its roots. 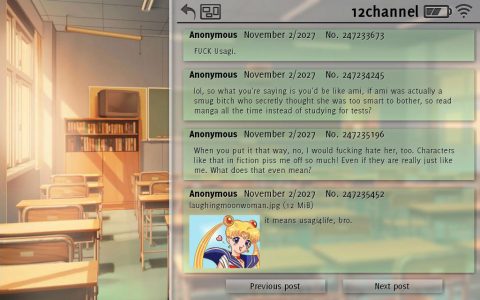 At just about every point in the game, you can take a break from reading Rook’s inner thoughts or talking with other students to check AmieConnect, your e-mail, and 12channel, a faux-4chan site that brings up a thread towards the end of every chapter that foreshadows the ending of said chapter. The game will stop you to read everything at certain points, and it can be a lot, so it’s best to read whenever there’s an update. AmieConnect’s purpose is mainly as the game’s main mechanic to clue you in on the head space of your students, allowing you to have an idea of what the eventual confrontation at the end of each chapter will be about and how you should answer. 12channel simply hints at the coming ending, but both serve similar narrative functions; foreshadowing. In fact, the game outright says this in the last chapter.

All the online stuff is very self aware, outright breaking the forth wall at game’s end. The real trick of the game is that it starts leading you in one direction, and before you realize it, the story zags into a completely different direction. It’s simply never clear when this is going to happen; knowing what the students are posting is usually informative, but it can occasionally cloud you to a coming twist. The game’s ending especially catches you off guard, even after the final bit of foreshadowing. The 12channel posts work in the exact same way, usually just with more misspelling, memes, and discussion on which given anime character the various posters would have sex with. It’s a very authentic simulation. Rook’s lecture topics all act as foreshadowing as well, and even the game’s release date contains an important clue to later developments. There’s a lot of tricks here that would end up being far more popular in the indie games about games movement that grew just a few years later. 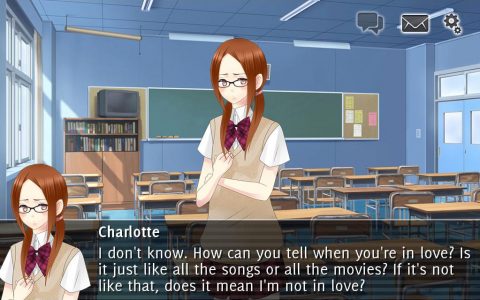 This is the most mechanically simple of Love’s games, which is quite the feat when she managed to make a series based around reading historical logs. However, that barely matters due to how strong the writing is. Every single character has a defined personality from just the ways they speak or type. Kendall and Akira are very relaxed and slip in internet lingo regularly, Charlotte always speaks in a proper manner, Taylor rarely expresses herself in real life while lashing out on social networks, and so forth. Rook himself is just a delight, giving inner commentary on everything occurring in the game, with said thoughts usually coming down to that he has no idea how to handle a given situation. His building frustration just becomes funnier and funnier as the game goes along and you read the contrasting social networking posts.

The game is also notable for exploring sexuality, a topic most games steer far away from or manage to handle with the subtlety of a hammer smashing through the screen of an old TV. Every character has some sort of conflict with love or their own sexuality, including a major one dealing with homophobia. The game makes it all very, very obvious, but it never feels like it’s beating you over the head with a point or message. It’s there, explored maturely, and used to make some lovely points about human relationships. The privacy issue lingering over the game’s head also gets a satisfying resolution in a completely unexpected way in the last chapter, tying it together with every other conflict that’s occurred through the game. Like most of Love’s work, Don’t take it personally looks at how people relate with one another, exploring technology as the overwhelming force it has become, and then finds a bright side to it. 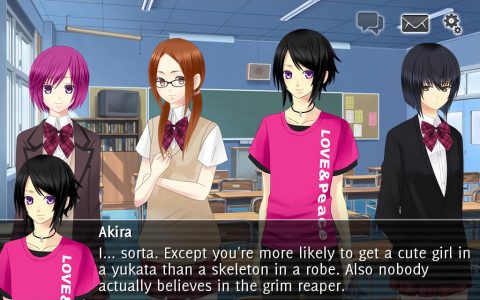 The game’s only real downside comes from the art. The character portraits look very smooth and detailed, while all the CG images you can find at certain scenes are very poorly drawn, almost DeviantArt level terrible, a side effect of the short development time. It rarely pops up, but it’s always distracting, a bizarre clashing of art styles that never fit together. Some of the images also have a little grain in them if you squint, usually a giveaway of poorly optimized image quality. Besides that, all the text is very clean and easy to read, and the menus are mostly easy to use. Trying to read comment chains on AmieConnect can be confusing if you’re not familiar with Facebook, but it’s easy to get the hang of. The length is also just right at about two to three hours, depending on how much you get sucked into the story. As far as free games go, this is a high quality project.