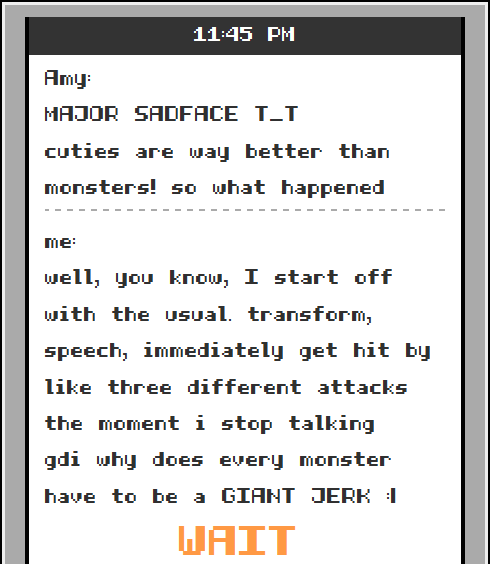 Along with her visual novels, Christine Love has also produced a few Twine games. Twine is a special program made for “choose your own adventure” style narrative games running in browsers. It’s most notable for being used to create Depression Quest, while most other titles on there have been smaller, strange experiments. The lower technical hurdle for using the program attracted a lot of minority voices of different races and sexualities, allowing them to express their own views and stories without making a traditional game with several other people or an insane amount of time involved. Unsurprisingly, Love’s choices of subject matter are magical girls and lesbians. 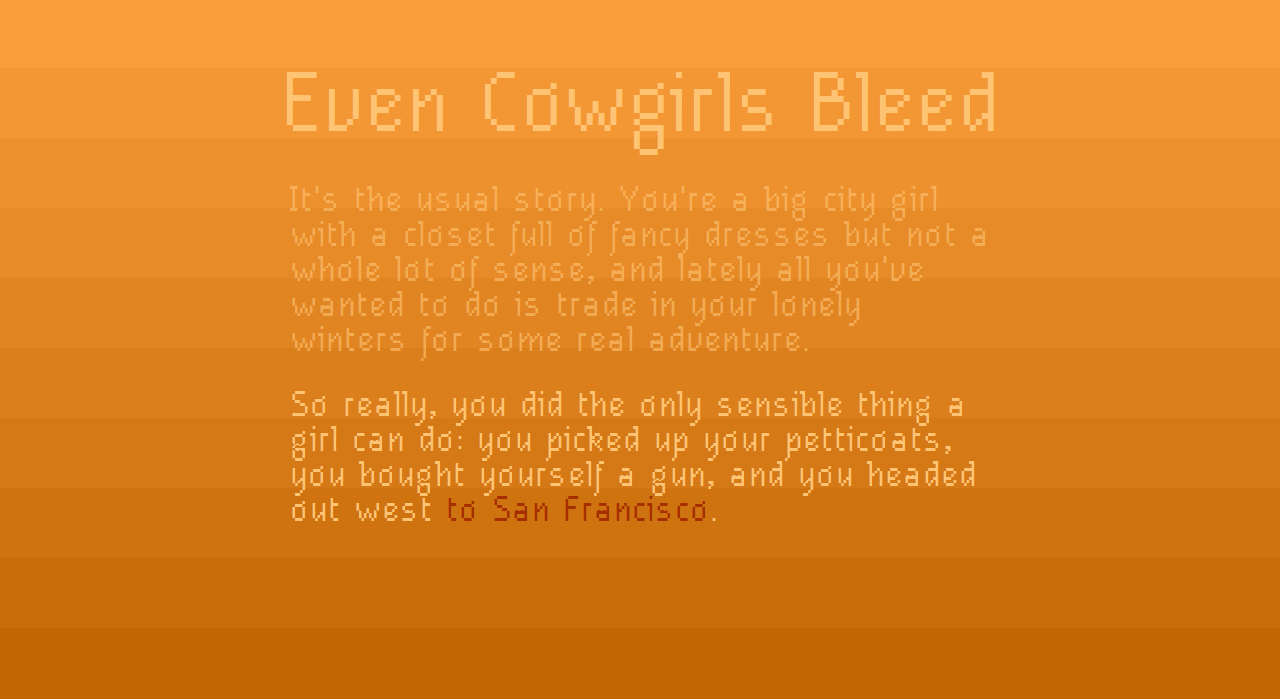 This game was released on Valentine’s Day, and made in roughly twenty-four hours where Love was not feeling particularly well. This translates here very plainly. Even Cowgirls Bleed is a short story about a lesbian cowgirl headed to San Francisco to make it big and show her stuff. She ends up meeting an attractive woman in the process, but completely ruins everything by being a huge show off that lacks the skills.

The game’s mechanic to move the story forward is surprisingly involved and creative. Instead of clicking on an option to move along the story, you drag your cursor on red words, triggering a gunshot sound and unlocking a new set of text. It’s fun at first, but it becomes very easy to shoot off at the wrong targets if you’re not paying close attention. That fits the story perfectly around the time the other cowgirl enters, as the main character becomes flustered and starts doing very stupid things.

The ending, no matter when you reach it, is incredibly depressing. The greater context is frustration at being unable to make it in a new environment and not realizing one’s self destructive behavior. It’s a mixture of early adult life frustration and anguish over failed relationships, and the presentation just throws salt on the wound. The letters become distorted, and the screen grows more and more red. It doesn’t leave you feeling good. 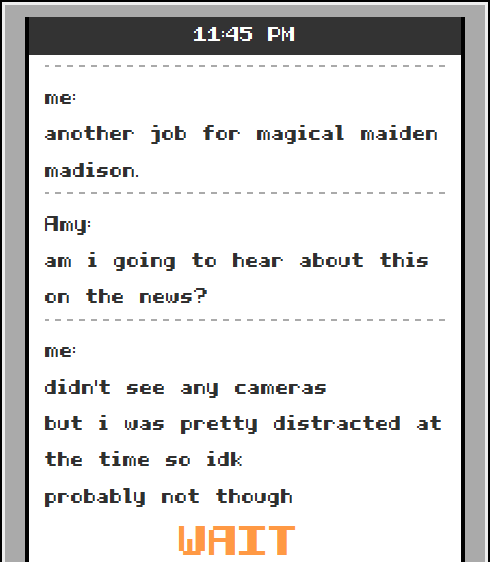 To balance out Even Cowgirls Bleed, Magical Maiden Madison was a project made in a week for a game jam and has a much cuter sense of humor to it. It’s a story of a normal day in the life of a magical girl, told through text messages between her and a friend named Amy. Where Even Cowgirls Bleed was more satirical and biting, Magical Maiden Madison is a loving parody that pokes fun at its choice target. As someone who watches a lot of anime and has a bit of experience with Sailor Moon and other magical girl shows, it’s pretty spot on.

The mechanical addition here is that you can answer back to Amy in more positive messages, or with negative messages. This doesn’t change the flow of the story, as the text messages are just a recounting, but does change up the dialog and gags. For example, when the Tuxedo Mask parody comes up, going for negative responses results in jokes aimed at Men’s Right Activists.

The story itself goes in a really amusing direction with a vine monster, with the magical girl complaining about the strange, almost sexist limitations from her powers. She also goes on a tangent about weird feelings she had during said fight, but it’s best you experience that part yourself. Every gag aimed at the magical girl genre is pretty much dead on, yet it never feels like it hates what it emulates, keeping it strictly in lighthearted, fun territory.