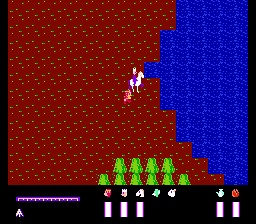 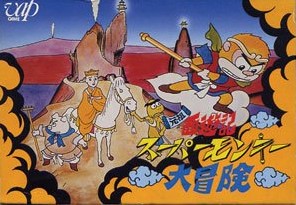 “Nagai tabi ga hajimaru…” (“The long journey begins…”) proclaims the opening text of Super Monkey Daibouken. And boy, are they not kidding. As one of the many versions of The Journey West, you control Son Goku the Monkey King as you lead the monk Genjo and his steed from China to India. This quest appears to occur in real time, seeing how some have estimated the game world to contain approximately 700 screens. It consists of many small, isolated islands, and your caravan moves at approximately a square a second. The landscapes seem to have been designed with no real coherence, and the gates to the next area are often invisible until you’re right on top of them, forcing you to tediously comb each and every square until you’re warped somewhere else. Worse, just because you find another area doesn’t mean that it’s the correct one – it can just as easily send you to a section which appears to be a dead end. Time passes on a day-night cycle, which is impressive for a console RPG from 1986, but certain gates only appear at certain times. It is maddening. 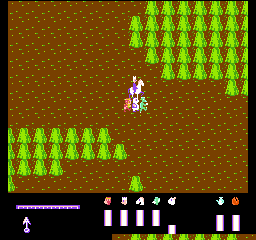 Every once in awhile, the game will appear to glitch up, and all of a sudden you’ll find yourself in the middle of a sidescrolling action sequence. These are impenetrably designed and programmed, as sprites move around the screen in ways that are only comprehensible by madmen and game rules like “hit detection” cease to have meaning. Son Goku is the primary warrior, if only because he seems to have the most health, but upon getting killed, the other party members – the king and his horse in the early stages of the game, and later a pig and a kappa – will resume in his stead. But not only are both of the other initial characters utterly useless, but the developers neglected to create a unique sprite for the horse, so it just takes on the form of one of the enemies – particularly, the dragon. Apparently it is a transforming horse – which actually is less ludicrious than it sounds, considering that it’s faithful to the original story.

Then, just as quickly as the battle begins, the game seizes you back on to the overworld without any warning, usually long before any of the enemies are actually dead. This process repeats until your party either starves to death or you stumble across a town to replenish your supplies. Given the overall quality of the experience, the former is most definitely preferable, where you’re solely greeted with the text “Aa! Shinjatta!” (“Oh no! I’ve died!”) before returning to the title screen. For a game that initially billed itself as an “ultimate role playing game”, it doesn’t have a proper save game feature. It does use a password, although it never outright tells you this. Instead at various points, you’ll be given messages that say things like “AB A A”, which is the code you’re supposed to enter at the title screen to skip ahead. It’s also one of the few cartridge based games that has noticeable loading times. 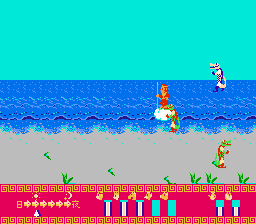 Disregarding the famously poor quality of Super Monkey Daibouken – it might be one of the worst on the Famicom, and isn’t as widely known amongst the non-Japanese crowd because it’s not referenced as often as Takeshi no Chousenjou or Transformers: Convoy the Nazo – the most sadly hilarious bit is a message hidden in the ROM, which details a lonely programmer’s desire for some loving, written in a form that it somewhat less eloquent than a traditional sonnet. (“I want a perverted girl. I love vagina! I love clitoris!”) Maybe if the dude had gotten more action he would’ve been in a better state of mind than to produce something as heinously wretched as this.