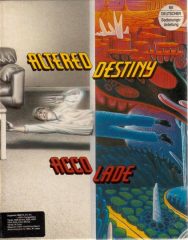 P. J. Barrett is just an average guy, looking forward to spending the night watching television with his sweetheart. His plans go slightly amuck when his TV is mistakenly switched at the repair shop, and the new set causes him to be teleported into another world. With only his wits, P. J. is charged with saving the land from Helmar, a powerful wizard who’s been terrorizing the kingdom with an artifact known as the Jewel of Light. 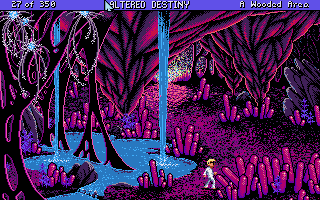 The whole “regular guy gets transported to alternate dimension and ends up becoming its savior” trope is practically as old as fantasy fiction itself, and Altered Destiny does little to shake things up. But it does have some absolutely fantastic visual design, with graphics that push the 16-color (if you’re playing on a PC) or 32-color (if you’re on an Amiga) limit to its breaking point. The game runs on the same engine as Les Manley in: Search for the King, which means it’s practically identical to the SCI0 interpreter Sierra used for the likes of King’s Quest IV and Space Quest III – artistically Altered Destiny is not only on par with these titles but perhaps bests them. The world of Daltere is less swords and sorcery fantasy and more fantastical sci-fi, filled with strange alien-like beings and resplendent with indigenous flora and fauna.

The primary colors through most of the game are pink, purple and green, and there’s a unique otherworldly feel to it, not too dissimilar to Delphine International’s Out of this World, another title with a similar theme, although one far more oppressive. That game had tentacles that would drag you underwater within the first five seconds of gameplay, and slugs who could instantly kill you with a scrape on the knee. In contrast, Altered Destiny has forests with dancing pink plants, green foxes with tails shaped like gigantic leaves, and flying jellyfish-things called ‘floaters’, which can be used as makeshift elevators to transport P.J. to the temples in the sky above. There’s also a dreamlike quality to certain scenarios, as you take an astral walk to the dream plane to solve puzzles and enter a bizarre hallucination to track down JonQuah, the twin brother of the elusive Helmar.

That’s not to say the world isn’t dangerous – an innocuous looking spring called a Hoppa will sprinkle you with dust, which slowly turns you into a plant if you’re not careful, and the land surrounding Helmar’s castle is filled with poisonous plants and nasty enemies waiting in the shadows. By far the most frustrating is the Canyon of Fear, a winding series of narrow platforms where a single pixel of imprecision will send you plummeting to your death. It’s just as bad as any of Sierra’s ‘arcade’ sequences, if not worse, because half the time the pathway is obscured by the scenery in the foreground.

While the folks at Accolade have painted an intensely creative world, it’s stymied by the usual adventure game issues of the era: an annoying interface and frustrating design. Unlike Sierra games your inventory is limited, requiring that you drop off unneeded items at the world’s hub area before venturing on. But you’re never given any indication of which items you’ll need on the adventure or, worse yet, which ones you won’t, potentially leading to unnecessary backtracking. There are also a few trick puzzles where you can use multiple items to solve it, but only one is correct – for example, popcorn can be used to trap a bird, but you should be using a jar of pigment instead. The popcorn is needed for a totally different puzzle much later on, and if wasted it’s time to reload.

The text input parser isn’t quite up to task either, which is partially the fault of the graphics. There are so many indescribable sights and sounds that it’s sometimes impossible to find the right word to interact with them. During one point you need to give an item to a rodent-like thing, but the game won’t accept ‘mouse’, ‘rat’ or anything of the like. Instead, you need to look at the screen and be told that, oh, that strange little thing is actually called a ‘kaylef’. Around the time of release many old-school adventure game designers lamented the death of the text parser in lieu on an icon-based one, but Altered Destiny is definitely a game that could’ve benefited from a more modern design.

While parts of it are antiquated, there’s still a gorgeous world to be found in Altered Destiny, and one that’s worth exploring. It may not be immediately appreciable by anyone who grew up on modern graphics, but those with an affinity for low color artwork, the kind that forces artists to be creative under extremely limited circumstances, will find one of the most aesthetically impressive titles of the era.