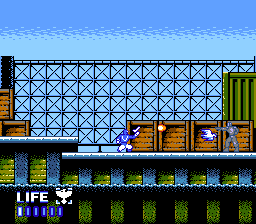 With Mighty Morphin Power Rangers becoming a significant cultural force in the western world again, it’s important not to forget where the series came from, or what interesting stuff that source material has spawned. The Super Sentai series of children’s live-action superhero shows has been going strong for decades now, so much so that it was on series fifteen by 1991. The bird themed Choujin Sentai Jetman series sticks out as the first running series in the Sentai line to get its own game, a 1991 Japan only release on the Famicom that shares the show’s name. Published by Bandai subsidiary Angel, the Choujin Sentai Jetman game let kids all over the country play as their favorite heroes and defeat the evil forces of Vyram, an interdimensional army aiming for complete domination.

The game proper is free of narrative, sticking to pure gameplay and managing some surprisingly fun levels in the process. There are five “areas” to pick from at start, and a last one unlocked once the others are beaten. You get five tries in the form of the five Jetmen, each with their own abilities and stats. Red Hawk and Black Condor get eight hit points and the powerful but short reaching Bringer Swords, Blue Swallow and White Swan each get six hit points and the longer ranged but weaker Bird Blasters, and Yellow Owl gets seven hit points and the Wing Gauntlets, which act as punch extenders and can hit two enemies at once with ease. With power roughly equal to the Bringer Swords, the gauntlets are easily the most useful weapons in high spawning areas. When one dies, you pick another to continue and go like this until you win or all five are defeated. 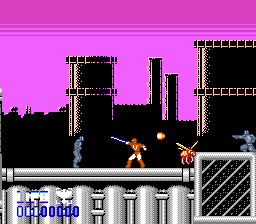 Every area is a pretty straight forward action set, with enemies coming from both sides as you move right and survive the waves and stationary turrets. It’s all pretty simple and relatively easy to handle on easy mode, but the game has four difficulty modes to pick from. Normal starts getting tricky with enemy placements and spawning, and the hidden hard and very hard difficulties are classic 8-bit challenge and frustration. These segments are mechanically simple, with your Jetmen having their main attack and a high kick only really useful for hitting enemies on slightly higher ledges right next to you (though that is useful). You also have access to a super you can access whenever you have one in stock, causing your Jetman to spread their wings and destroy every enemy on screen in a flash.

At the end of every area is a boss, but you don’t fight them with normal mechanics. Instead, a cutscene plays showing the team’s robots combining, and then has you control that combined robot and face the kaiju boss, mono-a-mono. These mecha segments are closer to a fighting game, but far clunkier. They even come with a super meter that charges overtime, but especially with successful punches and blocks. Managing to charge the four part meter gives you access to four different specials, though the one unit energy punch is mostly worthless. The second unit unlocks a head beam that travels down diagonally, the energy punch in the third tier stuns the enemy for a moment and helps you get off an extra hit, and a full bar results in a wave charge that can wipe out nearly half a health bar. It’s mostly a battle of attrition, learning patterns and trying to get in big damage while staying safe to outlast the enemy. 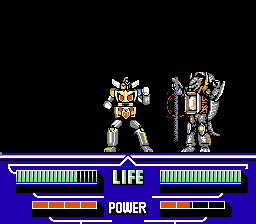 What’s nice about these fights is that each beast has a different set of patterns, attack types, and ferocity. You can usually tell the difficulty of a boss based on what area they control, with A being the weakest and D and E causing the most frustration. Destruction Beast Semimaru, the final boss, is no joke either, as he punishes aggressive players with his incredibly powerful full bar super, but also punishes defensive players with an energy blast that bypasses block when you’re too close. He’s the ultimate test of skill, no question. While this play style may feel a bit unfair with how different it is from the rest of the game, you can practice on the main menu in Battle Mode, allowing you to spar with the first five kaiju as much as you want. It’s a nice touch.

Jetman is definitely on the shorter side, but it’s incredibly polished. Everything moves nice and quick, the multiple difficulties make it fun to replay, and the kaiju fights have a rhythm all their own that gives the game a flavor many of its contemporaries didn’t have. It feels very faithful to the Sentai franchise, but stands well on its own as a classic in the 8-bit Nintendo library. There’s almost no Japanese text to deal with either, so it’s something worth digging out.