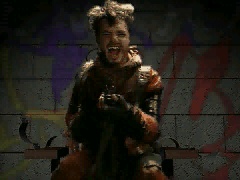 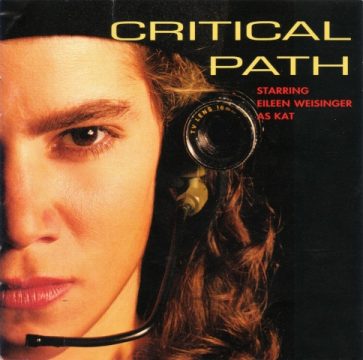 Critical Path is a game that initially was an impressive demonstration of new technology, but had few redeeming qualities after the novelty wore off. Around 1993 it became common for new PCs to have CD-ROM drives, and “multimedia” was a major buzzword in the computer industry, leading to a new generation of FMV games. Most of these had the same problem that their LaserDisc-based arcade predecessors suffered from: lack of interactivity. In this regard, Critical Path is one of the worst offenders.

Like Dragon’s Lair, Critical Path‘s entire gameplay is essentially a linear sequence of quick-time events (only 21 of them, at that). The premise is that the (nameless) player character is trapped in a “control room” in an iron foundry complex on a remote island, and must help the main character, Kat, travel from her crashed helicopter to the roof where his helicopter landed. Meanwhile the evil General Minh, who shot down the helicopter, is in another control room playing a deadly game with you. Unlike the similarly-premised game Lifeline from 10 years later, the developers did not attempt voice recognition, instead opting for mouse controls. The story accounts for this by having Kat’s audio receiver get damaged early on. It tries to add a little depth by not directly telling you what the correct actions are, but instead makes you figure them out from hints hidden in the user interface. The UI may seem overwhelming at first; it has many buttons and switches (some of which do nothing), a numeric keypad, and a notebook you can read. Usually the solutions are fairly easy, but doing this adventure-game-style puzzle solving is awkward while you’re distracted by the non-stop video playback. Due to an apparent design flaw, you can explore the UI while at the continue screen, even though it doesn’t make sense in-story because the UI is supposed to be diegetic. 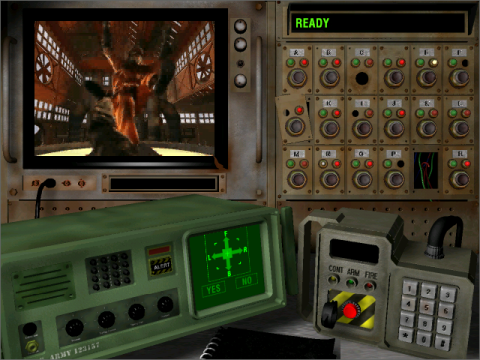 Compared to arcade LaserDisc games such as Dragon’s Lair and Time Gal, which had fairly high production values, Critical Path‘s video footage has not aged nearly as well. The visuals consist of pre-rendered 3DCG backgrounds with footage of actors chroma-keyed onto them, all of which was then reduced to 240×180 resolution and encoded in Cinepak, at a bitrate intended for single-speed CD-ROM drives. The results are blocky enough to be indecipherable at times, and occupy less than a fourth of the screen.

However, at least it has some redeeming value from the humor potential of its script and its actors’ performances, which resemble a campy B-movie. It’s not clear whether the campiness was intentional or not, but whatever the case, it’s often funny for the wrong reasons. You begin with nine lives; in other words, Kat has nine lives… This isn’t the only such pun; at one point, you guide Kat across a rickety walkway (a “catwalk”, naturally), during which she says that the heat is impairing her vision, so “you’ll be Kat’s eyes”; and in the ending cutscene, she proclaims triumphantly that “this Kat has ten lives!” The General’s minions are identical-looking thugs in orange jumpsuits and masks who seem incapable of any speech beyond growling noises, and there’s a fight scene where Kat punches one of them right in the crotch. At one point, Kat is on a conveyor belt leading into a pool of molten metal, and she yells an over-the-top “OH MY GODDDD!!!” when she sees the pool. Later, you must electrocute a giggling madman who’s about to shoot Kat, which is depicted by him transforming into an obviously-3DCG skeleton, prompting Kat to comment: “Shocking. You really ought to quit smoking.”

But the biggest source of camp value is General Minh (played by someone who was also listed in the credits as “executive producer”), who is a more over-the-top caricature than most Bond villains. On a torture chamber wall, there’s graffiti of him holding a severed head in each hand. His notebook is full of cryptic messages like “The TunneL Gate opens to laY BarE the Rolling light Of a DYing worlD and BlamBlamBlamBlamBlam! The BlooD OranGes Jump and Spit cOlor as I Fire the machiNe Gun.” Sometimes when you press a switch, he reverts your action and sends you a message in the control panel status line, such as “lEt heR gEt a lIttLe hOtTeR” when you try to stop the conveyor belt. Most of all, though, is a scene where he interrupts Kat’s video feed and gives a typical villain speech, concluding with “Assuming, of course, she survives! HAHAHAHAHAHAHA!!!”

Apart from these issues, the game has another big problem: it is extremely difficult to run the Windows version of the game. The installer often crashes with an unhelpful error message “Overflow”, and the game program often refuses to run, giving an error saying that you must first install it (even when all its files are at their correct locations). It seems to be runnable only on some Windows versions and not others; out of those I tried it with, it could only run on 32-bit Vista, and not on 3.11 and 98. Even then, it requires Windows 95 compatibility mode, 16bpp video mode, and QuickTime 2.1.2 (32-bit version) installed, because newer QuickTime versions don’t support the ancient Media Control Interface API. This QuickTime version is no longer available from Apple, but you can find it by searching the web for “QTEASY32.EXE”.

In summary, Critical Path isn’t unplayable like the worst FMV games are, but has minimal gameplay and tremendously outdated presentation values, leaving camp value as its only interesting feature. The development studio, Mechadeus, went on to develop the more puzzle-oriented (and more famous) FMV game The Daedalus Encounter a few years later.