The basest variety of arcade games possible is the type that allows players to shoot a lot of stuff. Many video games allow for a virtual manifestation of violence that satiates the basic primal need of humans to shoot and blow crap up. Naturally, it would be bad to do this in real life, so leave it to video games to give people guns and blast everything in sight. In the arcades of the 1980s, most such games took place in a two-dimensional sidescrolling environment like Contra, or in top-down perspective like Commando. However, the rather obscure Japanese TAD Corporation wondered what it would be like to give a third-person point of view to gun-based carnage and developed Cabal, an underrated arcade classic that spawned a short-lived but pretty awesome genre. It was the first of several 3D third-person shooting galleries in which you had control of both your character and your targeting cursor, the most well-known of such games likely being Natsume’s future-Western shoot-em-up Wild Guns. Other arcade games in this perspective include Seibu Kaihatsu’s Dynamite Duke, the early Neo Geo war shooter NAM-1975, and the infamous Pirates, best known for the announcer pronouncing the title word as “pie-ass.” None of these games would likely exist if Cabal didn’t set the table. 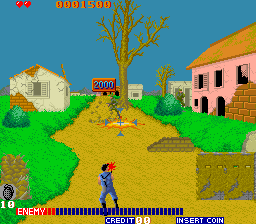 Cabal doesn’t really have any story to it; you simply essay the role as a commando (blue for player one and red for player two) and wage a one-or-two-man-army war on enemy forces. Go forward and destroy everyone and everything over a spread of five stages, each with four sublevels, effectively making for a total of twenty different screens. You start out firing through ruined fields to reach an airport, blast through swamplands to wreck a private enemy hideout, obliterate one of their harbors, demolish a village under occupation, and end up infiltrating the enemy’s desert headquarters. Your goal in each area is to kill all opposing soldiers and cause massive wanton property damage armed with nothing but an infinite-ammo rifle and several grenades. A meter at the bottom of the screen indicates your progress, turning from blue to red as you shoot down enemies and buildings, and you move on to the next level once it becomes entirely red. Whenever you clear a section, it’s made apparent that Cabal doesn’t take itself at all seriously. Victory causes your soldier to dance goofily across the battlefield and into the horizon set to a ridiculous jingle. It never gets old to see the commando(s) prance across the terrain where they killed many agents of the opposing force, though being that there’s no actual bloodshed, the game doesn’t tackily glorify the horrors of war.

There are three buttons: One for shooting, another for throwing grenades, and the third for dodging. While shooting, your character stays still as you move the cursor around; when not shooting, you simultaneously control your cursor and commando, who can only move left and right. You can toss grenades at any time, even while firing your primary weapon. Grenades do big damage to enemy vehicles and structures, but they are limited. You get ten grenades per life, though destroying special targets can give you extra grenades, and dying with less than ten in tow replenishes your explosive munitions. You can also grab a powerful machine gun that boosts your fire rate and a shotgun that increases your shot width and power. These bigger guns only last for about ten seconds (or until you die), so better deal maximum carnage while they’re in your possession. You also have the ability to roll, a useful tactic which makes you temporarily invincible to fire but can be detrimental if you tumble into an errant bullet or cannon shell. 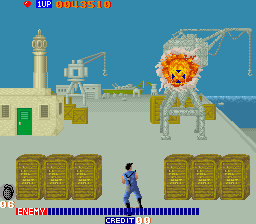 There’s a fair variety of enemies to take care of in each stage, with common infantry units as the base fodder firing their rifles or tossing grenades at you. Elite soldiers (dressed in white as opposed to the normal green) tumble around and take more than one hit to defeat, though they often reward you with grenades when felled. Somewhat hilariously (or disgustingly, depending on your ability to take these things lightyl in the context of a silly video game), two medics can run out on the field to take wounded soldiers away on a stretcher, and you can actually earn bonus grenades (and even one of the two bigger guns) by shooting them as they run off. Aside from foot soldiers, you also have a whole heap of military machines attempting to take you down: Tanks, APCs, transport trucks, motorbikes, helicopters, and bomber planes are what you’ll expect to face on your mission. At the end of every fourth sublevel, you face off against a gigantic boss machine, including a cannon-spamming twin helicopter, a well-armed submarine which attacks you in a pond, and a convoy truck which keeps driving by to drop sentry guns. These bosses are certainly manageable, but they’re made tougher due to their lifebars resetting if you die against them even once. Cabal isn’t too tough, and considering that it’s an old-school arcade game where your will to go on is determined by how many quarters are left in your pocket, the game usually encourages you to go on even after your last life is snuffed. However, it’s a bit frustrating to be held back if you can’t get past a particular boss, albeit this solution is remedied in two-player mode where you continue on so long as your partner stays alive.

For its time, the graphics were quite serviceable, with decent animation quality for all the sprites and fitting backgrounds that resemble actual guerrilla warzones. A few of the areas do look a bit samey, but a nice touch is how the next stage often looms in the background of your current battlefield. There’s not much to say about the music as you’ll be hearing the same tune 90% of the time: A low repeating bass tone which is actually entertaining in its simplicity, though it’ll likely be drowned out by all of the realistic sound effects of gunfire and aircraft rolling in. Each boss has its unique music with these tracks being quite good, but you likely won’t hear them for very long unless you really get held up at any particular fight. The graphics and sound are simple like the gameplay, and it is this simplicity that makes Cabal emblematic for its time. It’s far from the most elaborate game ever, but it doesn’t have to evolve outside of its premise of “shoot everything” in order to be an arcade classic. 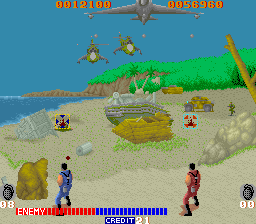 Cabal was popular enough to warrant several computer ports, though the ones for the Amstrad CPC, ZX Spectrum, and IBM PCs are not really worth playing. The Amstrad version is particularly bad with no color in the battlefields and incredibly choppy action, and while the Spectrum version looks slightly better, it plays no less terribly, with both versions lacking in-game music to boot. The PC speaker sound in the DOS version is beyond obnoxious, and the action is incredibly slow, but at least it gives you the victory jig unlike the other computer ports. The Commodore 64 version is a step up in terms of action pace, but this is only for the European version. Oddly enough, there was a separately developed C64 version in the US that is a considerably inferior port, with overall slower action and cruddier graphics. 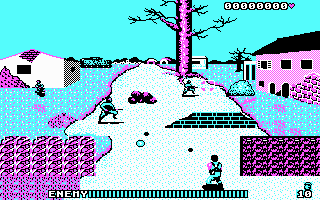 Rareware handled the NES port, which still doesn’t quite match up to the arcade version but at least has pretty competent graphics and retains the music. The best ports are the Amiga version, which is a fairly accurate replication of the arcade game with slightly touched-up graphics and music, and would probably be the most preferable way to play the game if you actually own an Amiga. The Atari ST version also looks nearly identical to the Amiga rendition, even if the action is slower and the sound quality not quite up to par. 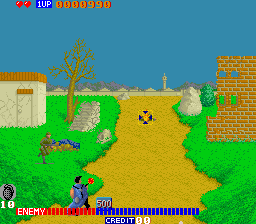 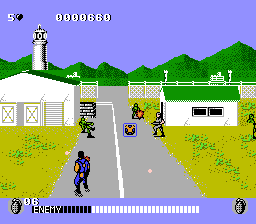 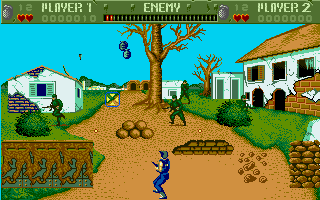 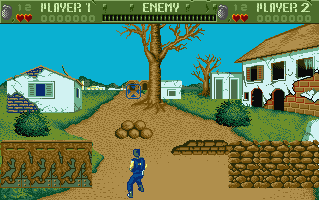 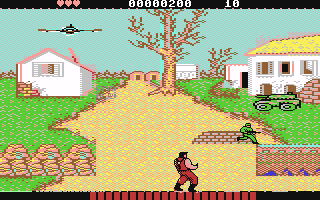 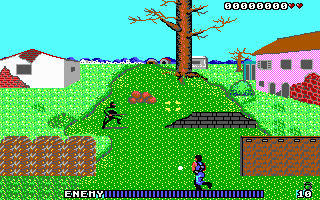 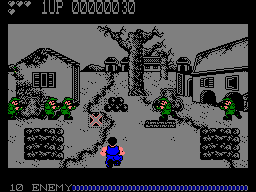 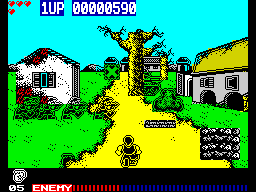