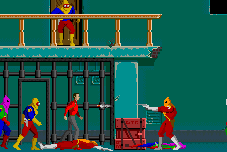 Namco circa 1986 had some pretty nice arcade games under it belt, the most popular being Pac-Man and its variations, but also other classics like Pole Position, Galaga, and Dig Dug. At this time, Namco decided to branch out further and attack the side-scrolling action game market. The result was Rolling Thunder, one of the most influential action games to hit the ’80s arcades. 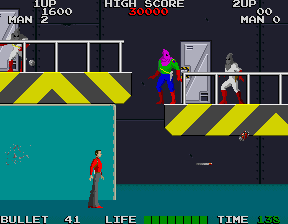 The first Rolling Thunder has a retro-spy feel to it. Playing as a secret agent codenamed Albatross from the organization WPCO (World Police Criminal Organization), you must infiltrate the secret lair of an evil faction known as Geldra, in order to save his lady partner Leila. Even though there’s no mention of this in the game, it actually takes place in the late 1960s, in an underground base in New York City.

Rolling Thunder plays much like Shinobi, even though Namco’s game predates Sega’s by about a year. In both games, you spend most of your time ducking behind boxes and shooting it out with a variety of bad guys, while jumping back and forth between the two levels on the screen. However, Rolling Thunder is a little more straightforward, since they are no hostages to rescue.

The most pronounced difference is that, in Rolling Thunder, you have limited ammunition. Running out of bullets doesn’t leave you completely defenseless, but you can only fire a single bullet at a time, which is extremely inefficient against the hordes of enemies you’ll be fighting off. In order to replenish your ammo supply, you need to duck in one of the many doors spread throughout the levels. Most are helpfully labeled, and a few even offer an upgraded machine gun, with more rapid fire power. There’s even a rather helpful bug, wherein ammo stores replenish their stock if you walk a couple of screens forward then double back. However, the time limit is often very tight, so this isn’t always abusable. 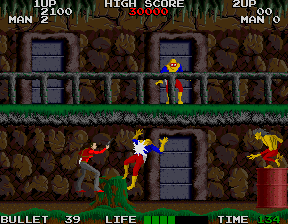 Many of the doors act as spawn points for enemy soldiers, who will often duck in and out of the fray. You can too, and some unmarked doors give bonuses, but it’s rarely rarely good idea to stay hiding for too long since more enemies will usually pop up when you’re in dispose. There’s rarely any good time for a breather, because Rolling Thunder is known for its brutal difficulty. It’s not just kind of hard – it is massively, gut-punchingly difficult. The game gives you a life bar, but this is almost a cruel joke, since running into an enemy decreases it in half, and getting shot kills you outright. Dying also means getting sent back to an earlier part of the stage.

In the early stages, the enemies consist of an endless flood of cloaked goods in bright outfits, which are usually color coded to indicate their skills. Some simply walk around aimlessly, some have guns, others have grenades. The tougher varieties can take multiple hits. Once you’ve beaten a few levels and have successfully managed to figure out effective tactics to beat them, the game throws even crazier foes your way – agile panthers, flying bat creatures, and jumping fire creatures which explode into smaller flames when you shoot them. 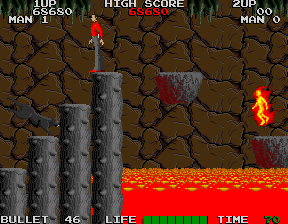 Moreover, the controls are very restrictive. To be fair, many of these issues are common issues of the era – you can’t change direction in mid-air, and you can’t fire your gun vertically, so you need to work within these constraints to effectively kill bad guys. More maddening is the fact that you can’t even fire your gun in mid-air, often leaving you completely defenseless unless you can climb up on a higher vertical level. And while there are only a few platforming segments, they rank up next to the NES Ninja Gaiden as some of the most infuriating, due to the enemy placements, which are perfectly calculated to knock you to your death.

There are technically only five stages, but upon completion of the fifth stage, you begin the second “story”, where you need to replay the stages again, but at a higher difficulty level. Second loops are hardly unheard of in games of the era, but the second story features more than just stronger enemies. The stages themselves have been modified with new obstacles, like cages that block off certain hallways or laser beams positioned for the greatest amount of aggravation. Upon beating these stages again, you finally face off against Maboo for the final battle. 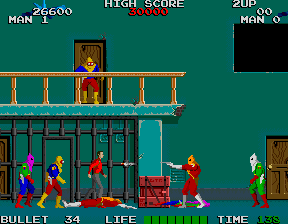 The visuals are fairly decent, if a little repetitive. Three of the five levels take place in a generic underground military base setting, while the other two take place in a jungle cave, complete with lava kits. The character sprites are large and lanky, though there are some cool animations touches, like the way the hero effortlessly flips around handrails when jumping between levels, or his overtly dramatic animations. The levels are punctuated with brief, wordless cutscenes of Leila being tortued by the green-faced Maboo, the leader of Geldra. He also appears on the Game Over screen, where he taunts you with digitized laughter. These scenes, along with the title screen, are displayed on a massive monitor as part of a war room setup. The game runs on the Namco System 86 hardware, which also powered games like Wonder Momo and Genpei Toumaden.

There are two major revisions of the arcade game, known as the “old” and “new” versions. In the “old” version, the only music played throughout the whole game is the Cave theme. The “new” version adds a separate track for the first, second and fifth stages. The “new” version also adds the post-level cutscenes of the girl being tortured, and the ability to get extends. Other additions include bug fixes, difficulty rebalancing, a slightly nicer title logo, and the ability to select stages via a cheat code. Only the “new” version was seen outside of Japan, with Atari acting as the game’s distributor in North America. 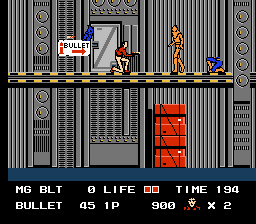 The Nintendo 8-bit version of Rolling Thunder is a pretty decent port. While the reduced detail makes everyone look even more like stick figures, the enemies lose their brightly colored uniforms and seem much less goofier as a result. The post-level scenes of Leila are also gone, though the laughing Maboo is still present. The life bar has been reduced to two blocks, which more closely indicates how many hits the hero can actually absorb. The game is still incredibly difficult, though in different ways. Though there are far less enemies on the screen due to technical limitations, their patterns, especially the grenade throwers, are faster than the arcade version, and require more precise timing. Though there are limited continues, the game does issue passwords so you can skip ahead to the second story. Incredibly enough, the American release of Rolling Thunder actually had a pretty cool cover that combined the two main selling points of the game (guns and saving damsels) into one great package. 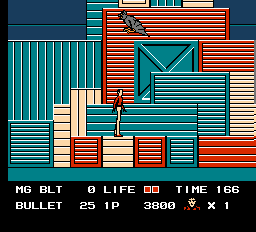 The Famicom versions of the game uses the Namco163 mapper chip, which uses the extended sound channels of the system for a slightly richer sound. Since the NES did not support these channels, the American version, published by Tengen, has different, somewhat weaker music, and worse sound effects.

As was usual at the time, Rolling Thunder was ported to every popular computer system in Europe. All of the computer versions were ported by Tiertex, and they’re all terrible, to varying degrees. The Amiga and Atari ST versions are shockingly awful, with embarrassing animation, miscolored graphics, and gameplay that runs maybe a third of the speed of the original. At first, the music in the arcade version sounds like a decent replication of the arcade music, but it only plays the first half of the theme song, and repeats it over and over. The Amstrad CPC and ZX Spectrum versions similarly play just as badly, and both look and sound even worse. The Commodore 64 version is, by default, the best of the lot, because it’s not completely unplayable. But it’s still far too slow, the graphics look terrible compared to the Amstrad version, and the music is also quite bad. All of the versions have a huge portion of the screen taken up with the game’s logo. There was also a version for the Atari Lynx in the works, but it was never published. 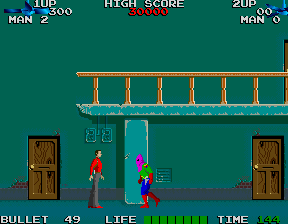 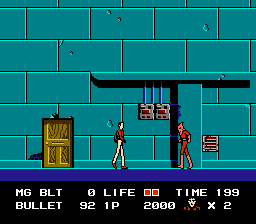 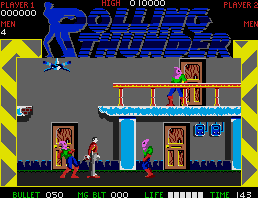 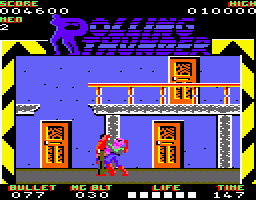 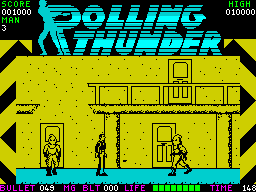 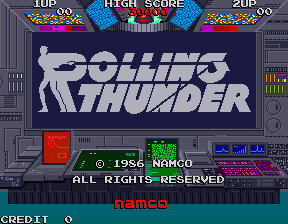 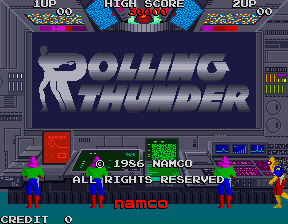