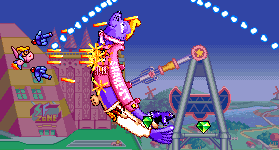 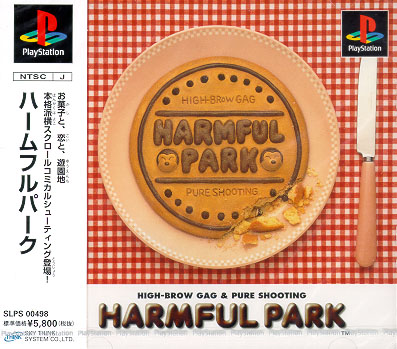 Konami was a fantastic developer, but they can be bastards sometimes, especially when it comes to their shooters. Like, the ending of Axelay, which totally promised us a sequel? Yeah, what happened to that? Several of their games never left the arcades – they never ported XEXEX or either Thunder Cross (up until 2006, over ten years after their releases), and Ajax never graced a console, it just had some computer ports. They stopped making Parodius games back in 1996, and only followed them up with the dreadful Otomedius series. Which is sad, because there was nothing that really quite matched it in terms of both quality gameplay and flat-out lunacy.

Except for Harmful Park. 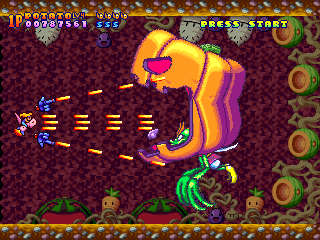 Harmful Park was only released on the PlayStation in Japan by a small company named Sky Think Systems. It’s your standard 2D side-scrolling shooter, except set in a bizarre amusement park. As the (relatively lengthy) introduction tells you, an evil scientist has taken over Heartful Park and is using it for nefarious purposes. One of his colleagues aims to stop him, but she’s old to do it herself. So, she commands her two slacker daughters to save the day, equipping them with some kind of flying motorcycle armed to the teeth with strange weapons.

At any time, you can switch between four weapons: Potato, Ice Cream, Pie and Jerry (should be Jelly, but since the Japanese don’t distinguish between r’s and ‘l’s, we’ll forgive them.) The Potato gun is your standard rapid fire bullet weapon, while the Ice Cream is pretty similar to the Laser weapons from the Gradius games, firing a long, powerful stream of delicious destruction. The Pie weapons is slow, but travels at an arc and can cause great damage if they hit, while the Jerry weapon homes in on enemies on the screen, but it’s rather weak.

Each weapon can be strengthened individually up to three times, although power-ups tend to be on the rare side. Getting killed will downgrade your current weapon by a level, but it’s possible to keep a strong arsenal in backup if you spread your power-ups properly. You’re also immediately resurrected after death, so you don’t need to worry about check points. You can continue right where you left off, up until stage four, when it starts sending you back to the beginning of the level when you run out of lives. Each of the six stages are relatively lengthy, usually taking about five minutes to clear.

Each weapon also has a secondary function, which can be used a limited amount of times. The Potato gun creates a huge potato, which shatters and hits everything around it, and the Pie weapon sends out deadly cakes in every possible direction. The Jerry weapon creates an invincible Jell-O shield, while the Ice Cream will trigger a huge sundae that fires out a huge wave of delectable carnage. 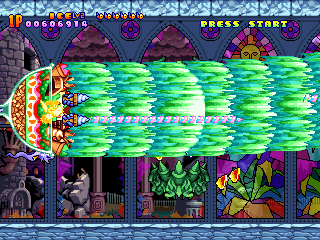 As with Parodius, Harmful Park is really defined by all of the details, whether they be strange enemies, inventive bullet patterns, or just plain wacky situations. One bad guy has a Jiffy Pop embedded in his chest, which he then explodes, unleashing a torrent of popcorn. Another set of enemies drink down gasoline and then breath of fire. Yet another is a gumball machine which sends gumballs bouncing erratically around the screen. Paratroopers fall from the sky, into a vat of chocolate, which then splashes up to try to kill you. Many of the artillery encampments are merely coin operated rides. The bats carry baseball bats. Certain enemies leave behind notes that say “aho” (jerk). And then there’s the giant robotic ape riding the cow train.

Harmful Park is full of these inventive elements, which really goes to show that each and every part of this game was crafted with loving care and attention. It also lends to replayability, as you begin to pick out more strange things as you return to each stage. While there isn’t much in the way of fancy special effects, all of the graphics are bright, colorful, and some of the best 2D you’ll find on the PlayStation. The soundtrack is pleasant and whimsical, even though only a few songs are really memorable. Your character’s death scream is pretty amusing though, especially as you see their tiny, aggravated expression as their cycle explodes and they’re tossed off-screen.

Below is a rundown of all of the levels, as well as some of the most amusing parts of the game. 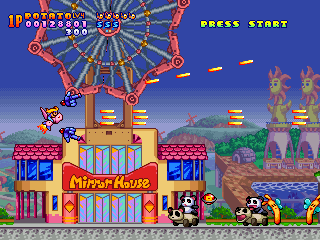 The first level is a standard amusement park, filled with ferris wheels, spinning tea cups, and one of those pirate-ship things that swing back and forth. Except it’s not a pirate ship and it cries when you hit it. 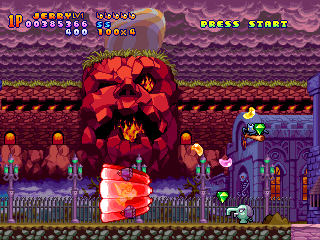 This is a haunted house, complete with a creepy dollhouse and a stained glass window chapel. The end boss is a giant, creepy pumpkin. 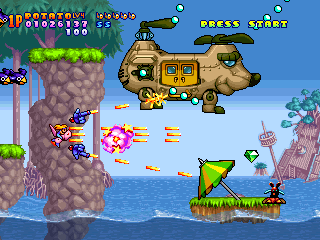 This is a tropical zoo. Also filled with evil flying squirrels and robot apes and puppy helicopters! The boss is a huge whale who vomits random junk like Colonel Sanders statues. 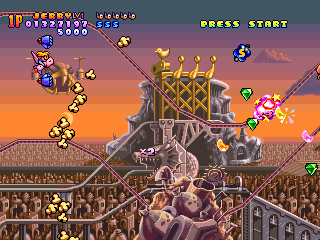 This level takes place at dusk, and features a gigantic roller coaster. Compared to the rest of the game, it isn’t quite as interesting, except for a strange, human-faced battleship and a drive-in movie theater. 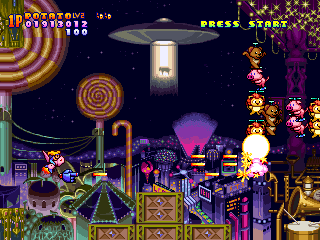 A nighttime carnival stage, filled with bright neon lights, candy, and giant wooden house with a machine gun on it’s mouth. Also, check out the cow abduction in the background. 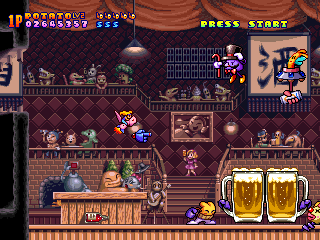 The final level. You have to admire a bad guy who helms his secret lair in the middle of a beer garden. 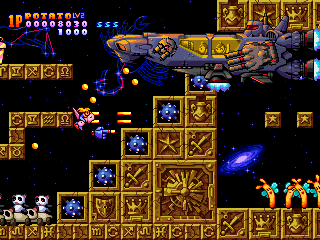 This level is the interior of a planetarium. The difficulty level does not affect this stage, so it’s hard no matter what. 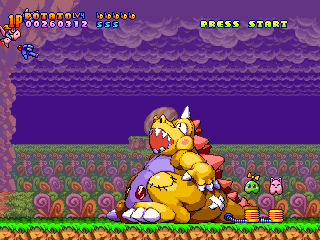 The first boss is actually a dinosaur balloon that’s slowly inflated before you get to fight it. 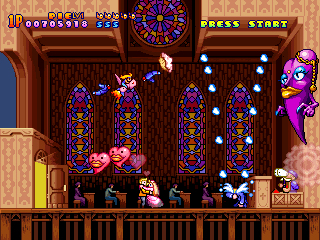 The marriage is one of the coolest scenes in the game. Right before a couple are about to be wed, another man bursts through the door, and the bride jilts the groom, leaving him crying relentless. Those tears can be deadly. 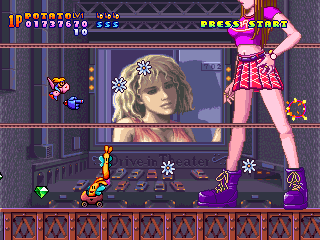 One boss in a drive-in movie theater looks to be an attractive kogal…. 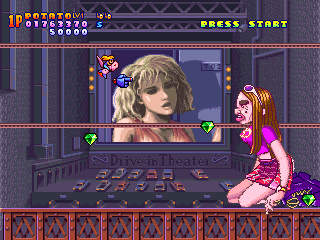 …until you beat her, in which she’s revealed to be something of a butterface…. 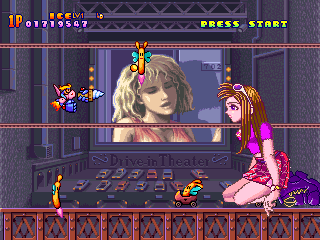 …but only if you’re playing on a lower difficulty level. She looks pretty cute on Hard mode. 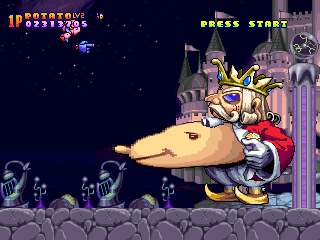 This rather rotund emperor attacks with his absolutely enormous gut. I love how there’re eyes where the nipples should be, and the belly button is a nose. 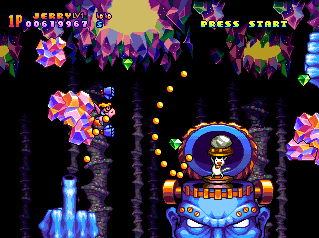 Not only is this massive Frankenstein giving you the finger, but it’s being controlled by a dancing cat in his head. 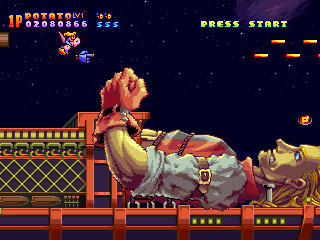 You’ll find a gigantic Gulliver tied to the ground, and he’s none too happy about it. Watch out for his angry fists! 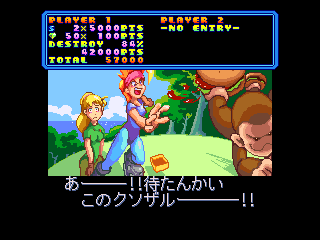 There’s also an interesting score system at work. If you kill multiple enemies with the same shot, you’ll get a multiplier to get higher values. Additionally, most enemies drop little crystals, which will give you more points if you can collect them quickly. If you’re not into getting a high score, you can safely ignore it. In fact, this balance is one of Harmful Park‘s greatest strengths. The difficulty is well balanced, so that the Easy mode is fun for shmup newbies, but vets will find plenty of challenge on the hardest difficulty setting. It’s one of the few shooters practically any audience can enjoy. The only real problem – if you can call it that – is that the scrolling is VERY slow, which does make the pace feel a bit sluggish.

Harmful Park allows for two players simultaneously, but perhaps Sky Think realized that shooters tend to be a bit on the short side. Therefore, they added three multiplayer minigames to extend it’s life a little bit. Punch Ball is a variation on Pong, where two players play catch with a ball and attempt to make it past their opponents goal. Sky Circuit is a split-screen racing game with six different stages to jet through. Tank Battle is the odd man out, as it doesn’t use any of the graphics from the main game. Instead, it’s an overhead match with up to four players, each controlling a tank, to blow the hell out of each other. 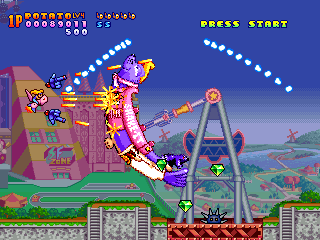 Unfortunately, Harmful Park is one of those underground shooters that got a fairly low print run. It’s also one of the most sought after games in the Japanese PlayStation aftermarket. If you’re looking to purchase it, expect the price to be at least $100, if not more. While it’s hard to say that the game is really worth that music, Harmful Park is undoubtedly one of the best shooters on the PlayStation, and worth checking out by any means necessary.

In 2012, Harmful Park was released on the PlayStation Network, but only in Japan.

Links:
Twin Dreams – Harmful Park Another review of this quirky and lovable game.