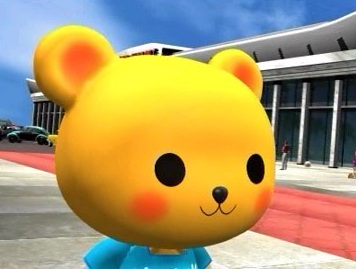 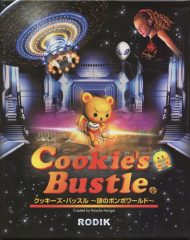 Cookie Blair is a five year old girl from New Jersey, but she think she’s a teddy bear, so that’s how she appears in the game. She’s made her way to the South Pacific island of Bombo World, which holds a special sports tournament every four years. It’s a curious country, though – sometime in the past, aliens visited, and the mayor gave them half of the island in exchange for their advanced technology, where they erected a place called Dero City. This has led to some political instability, which Cookie experiences almost immediately after landing. She attempts to ride a bus to the sports coliseum, only to be denied because she doesn’t have a pass. Which is just as well, because then a jeep drives up behind it, pulls out a rocket launcher, and proceeds to blow the bus to smithereens. Then a helicopter descends, fills the jeep’s drivers full of lead, then takes off. 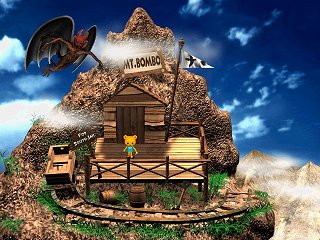 That’s the sort of ridiculous contrast that typifies Cookie’s Bustle. The adorable little girl-bear is wildly out of her depth, in world full of weird characters and dark comedy, as you explore luscious jungles and advanced cyber cities, with randomized events (like stumbling into military skirmishes) and multiple endings. There are over 200 NPCs, some voiced by some well-known (at the time) Japanese actors. In spite of its cutesy exterior, it’s definitely not for kids, and it’s also shockingly difficult – it’s a point and click adventure game, but the puzzles are just as obtuse and vague as any of Sierra’s classic titles, and be prepared for some cruel deaths. You also have to deal with the fact that Cookie is only five years old, and constantly complains about being tired, being hungry, or having to use the bathroom. If you manage to bumble through the puzzles, there are assorted sporting events that take the form of minigames, ranging from sky diving, hammer tossing, track and field, swimming, and an unusual game where you control Cookie on a jet pack as she dodges alien fire. 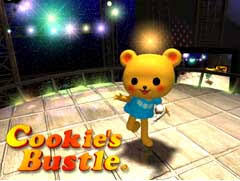 Cookie’s Bustle was one of the only pieces of software developed and published by Rodik, and even within Japan, it’s incredibly obscure, but it’s remember fondly by those who’ve played it for its unique blend of darkly cute strangeness.