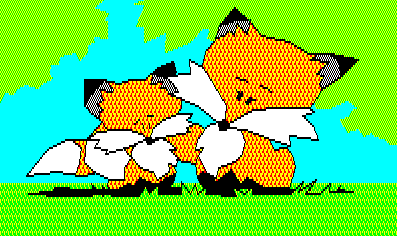 Like many Japanese computer game publishers in the 80s, Micro Cabin developed a number of adventure games. Alas, their first efforts were not…good. The first game was a complete rip-off of Online System’s famed Mystery House, even stealing the name – at that point it had not been released in Japan, though Starcraft later localized it, making their plagiarism more apparent. Their second adventure game was Dreamland, which was noticeably for parodying the “Disneyland” logo but not much else. 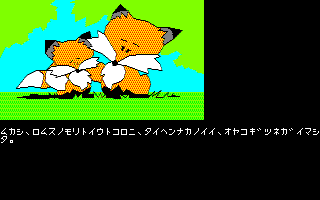 At this point, like other publishers, they held contests to solicit games from the public, and their next title, released in 1984, was an adorable classic. Named Hurry Fox, it stars a loving mommy fox and her little baby, who unfortunately has fallen ill. She ventures off alone into order to find a cure, initially sending her through the woods, and eventually into human civilization. Much of the game is spent exploring and talking to other animals, who will give some hints. Despite lacking pockets (or even opposable thumbs), you can pick up items to put in your inventory and use them later, though it also takes inspiration from Japanese folklore and gives your fox the ability to change into other forms. Ultimately you discover that the prophesized cure is really just a hospital, where you take take your child and have them get treated properly. 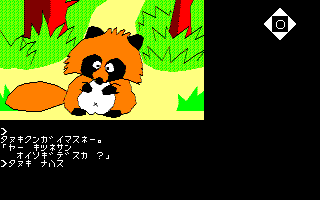 Movement is done via the arrow keys, while commands are entered via text (you enter romaji on the keyboard, which is translated into katakana). There are a whole bunch of sudden deaths if you wander in the wrong direction, but the game’s not terribly long. 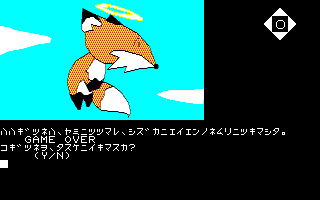 Naturally the appeal is the absolutely charming visuals. Just look at how cute they are! Even the death scene is delightful. 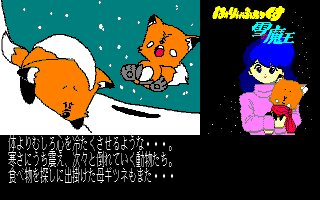 Hurry Fox received a sequel two years later, subtitled Yuki no Maou-hen (“Chapter of the Demonic Snow Lord”), which is a direct sequel. Winter has come and dumped a ton of snow on the land. Unfortunately the mama fox perished while out hunting, but her child was nursed back to health thanks to a local girl named Mari. Once the snow cleared, they sought her out again, before learning that she was actually kidnapped by an evil demon (!!), so it’s up to the little fox to save her. This version includes higher resolution text (and kanji) and improved visuals in general. It also includes some of the same animals as before, including the weird smoking monkey. 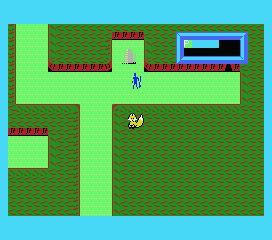 There’s also an alternate version of the original game called Hurry Fox MSX Special, released (obviously) only for the MSX. This takes the same concept and reimagines it as an RPG. Displayed from an overhead perspective, you explore the land, and can either talk to animals or engage them in combat.

The title of the game is never spelled in English, so some places localize the title as “Harry” rather than “Hurry”, as the Japanese is ambiguous. The second game reveals that “Hurry” is the fox’s family name.