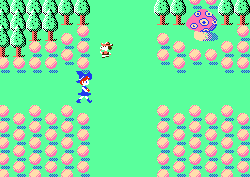 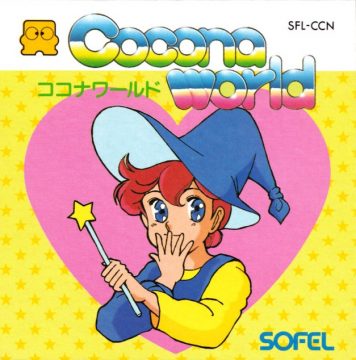 Cocona World is a cutesy adventure game starring a little witch, the titular Cocona, who needs your help to become a magical princess. The experience set up as a Zelda-like game, though there are only two small maps to explore. You can enter your name at the beginning, to which Cocona will refer to you directly. The B button is used entirely to interact with her, to which she’ll usually just respond with some vague pleasantry (“Hello!” “Nice weather, isn’t it?”). In addition to the animals roaming around (one of whom looks a lot like Snoopy), there are assorted mini-games, like bingo and a fortune teller. The game’s open-ended, but the first thing you need to do is find a fairy so you can get your magic back. 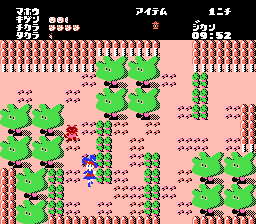 In addition to managing your magic and strength, you also have to watch out for your mood. The animals wandering around are classified as either good or evil, and attacking the good ones will cause your mood to drop. Every once in awhile, Cocona will also make a request directly to the player (wanting to play a certain mini-game, for example), and unless you answer this within a certain timeframe, she’ll also get sad. If either her health or mood runs empty, Cocona will turn into an angel, fly off, and write a personalized farewell note. The system will then lock at this screen, forcing a hard reset. 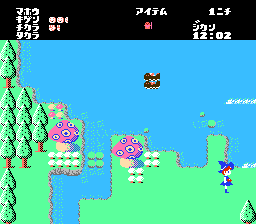 Outside of Cocona’s requests, the game is very vague about what you’re supposed to be doing. Certain bad animals will drop items, some of which are used in specific spots. Once you know exactly what’re you supposed to be doing, the game is fairly short. However, it takes a long time to actually beat because it’s painfully slow. Cocona trudges along at an incredibly laborious pace, and the bingo game, in particular, just seems to go on forever. Plus, the layout of the world is randomized, at least until you have the Jizo statue item. Overall, Cocona World has a cute concept to be sure, and it’s an interesting change from the usual action-RPGs, but it’s just exasperating to play.