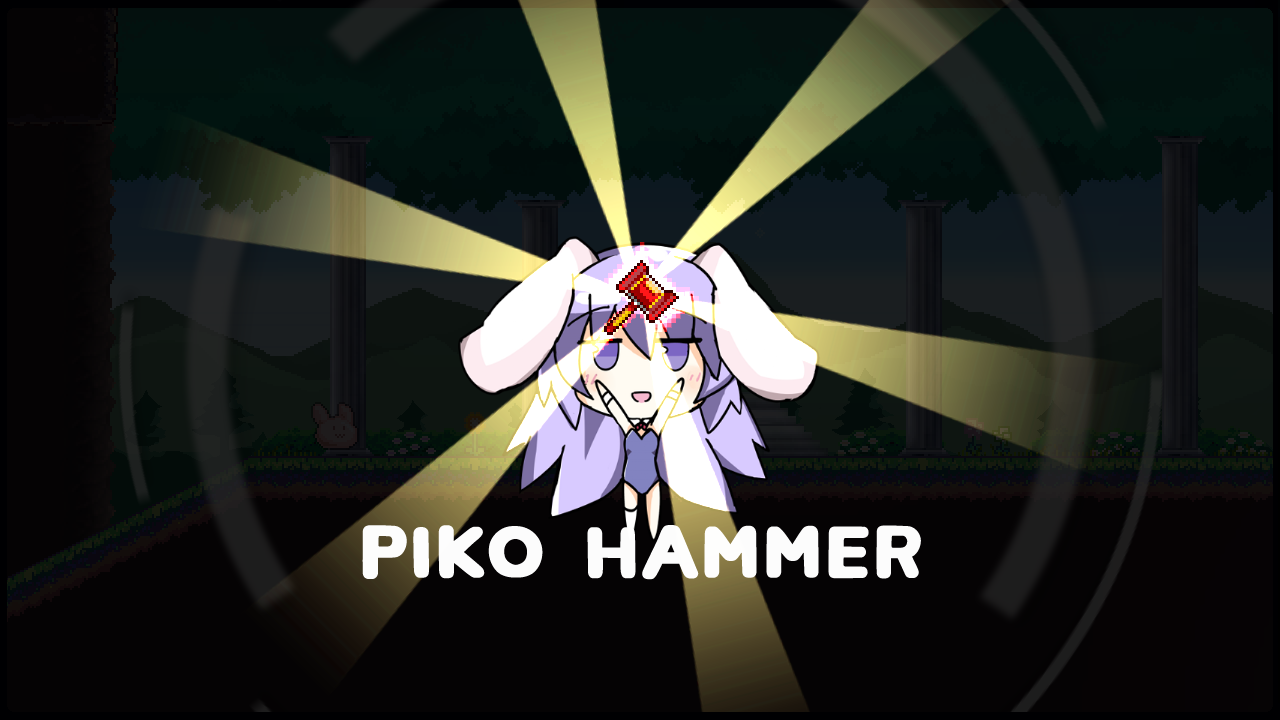 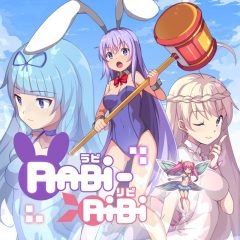 Hey, you got Touhou Project in my Metroidvania! Hey, you got free 2D exploration in my bullet hell! And who gave that bunny girl Amy Rose’s hammer!? What’s fun about doujin game development is that it is rife with all sorts of nonsense if you know where to look, and Rabi-Ribi is of the highest class among that crowded category. Made by Taiwanese developer Yue Gema and localized alongside Sekai Project, Rabi-Ribi is a blend of various familiar genres, and it manages to be something fresh through those combinations. It is also aggressively anime in every way imaginable, but in a good way. 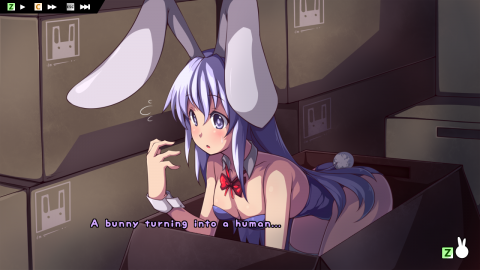 The bizarre story begins with a bunny, as in an actual bunny, waking in in a box in some strange room, with the bigger surprise of discovering she’s now somehow a human girl and wearing a playboy bunny outfit (though still with her ears and cotton tail). After some exploring, she runs into a shadowy figure and passes out, waking back up on her home island of Rabi-Ribi, where everyone no longer recognizes her in her new form. She’s mistaken for one of the UPRPRC, a society of bunny fangirls (who’s full name roughly translates to “bunny lickers”), and attacked by the friends of her master Rumi. Her goals are now to reunite with her master and figure out whats happened to her, soon further discovering that Rumi’s sister has also vanished around the time she did. With the help of a magical fairy named Ribbon and her powerful piko hammer, bunny girl Erina must plow through all sorts of adorable creatures and powerful wacky witches to save her island and hopefully discover what’s threatening it (you know, beyond the lesbian army obsessed with bunny girls). 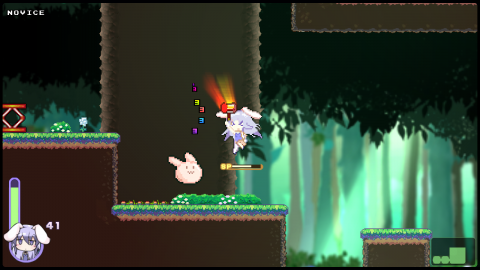 Rabi-Ribi‘s main plot is mainly magical nonsense with a single main villain who gets named and defined late in the story, while the bunny fangirl army doesn’t actually get any explanation until the post game chapters (though it is worth the continued play). It’s all mainly an excuse to explore the game world and fight the ridiculous magic women of the island to befriend them. The game structures itself into chapters, where the main goal is usually to teleport back to the area Erina woke up in to figure out what’s happening, later carved into exploring new areas of the island to find people from the town in the post game. The in-between, and the vast majority of the game, is exploring areas to find items, upgrades, and women to bring to town to help out in Rumi’s efforts. 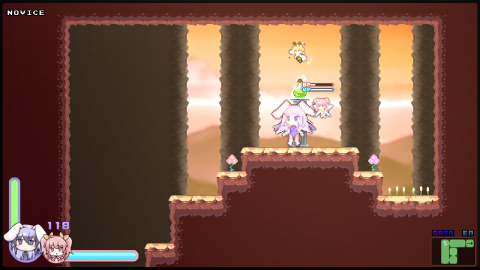 No matter who you find, you must always fight for the sake of friendship, as is wacky anime game law, with the occasional magical bunny lights to hypnotize them into a fight. After finding a set amount, you can continue on with the game…or just go explore some more until you hit a wall. Some upgrades needed to travel through the world can only be gotten after completing certain story sections, though this is only if you haven’t figured out the advanced tech hidden in the game. For example, you don’t actually need the wall jump item to wall jump, you can use the ability by simply experimenting. You even get an achievement for it. A zero percent item run is entirely possible and even encouraged, but only for advanced players, even on low difficulty levels. 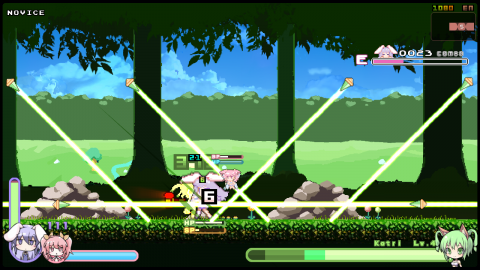 The game is as retro as it gets in every aspect of its design. Erina’s basic movements are directly taken from countless 16-bit era platformers (especially Mega Man X) and a bit of the Sonic Advance version of Amy, while all the bullet hell elements feel like they were taken out of an old Touhou Project (plus a few characters resemble or even act as references to some of the more well known ones, particularly Ashuri compared with Touhou‘s Marisa). Even the ways you grow stronger are directly tied into Castlevania and Metroid style item gathering through exploration, with the early game leveling system for a few of your moves quickly turned into an after thought, everything maxing out an hour or two in. 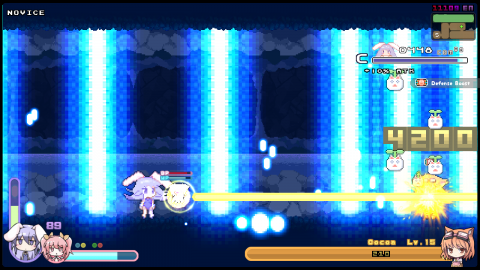 The four points you can upgrade are health, mana (used for magic projectile attacks), battle (which acts as Erina’s stamina meter for her attacks), and pack. The pack points are especially interesting, as the game has a badge system similar to the one in the Paper Mario series, where you can increase your stats and gain other advantages through equipping badges. How many you can equip depends on the badge point value and the max points you can hold, keeping things balanced. It also rewards finding more towns people, as pack upgrades get point upgrades the more people you’ve recruited. 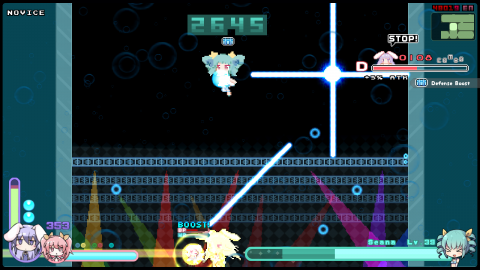 Combat is interesting as you’re technically controlling two characters. Erina handles melee combat and movement, while Ribbon acts as your gunner, like the robot sidekicks in Shatterhand or the pods in NieR: Automata. While Erina can dish out the most damage, she can’t really get up close and personal with bosses for most of the fight, thanks to their ridiculous bullet patterns and flight abilities, but Ribbon can damage them as you dodge with magical bullets. She can charge them for powerful specialty shots and gets a wide variety as you collect more magic types, including homing bullets, a charge shot that slows down time in a small area, and a constant beam that does low damage but constantly hits as long as the target remains in it. While Ribbon can’t fire while Erina is attacking outside unleashing a charge shot during a combo, she can fire as Erina moves, resulting in some truly manic firefights. Erina even keeps up with more and more attacks, including an air dash charge and a rolling hammer move. 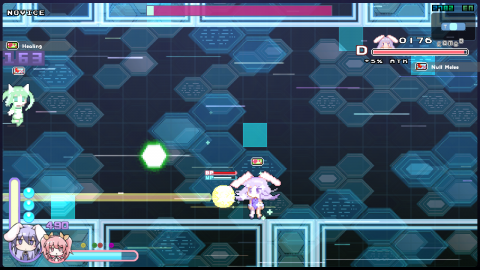 The game has an incredibly satisfying gameplay loop, and even manages to be welcoming to new players through a large variety of difficulty options. You can not only pick your basic difficulty, but also how bosses scale in level. This means you can play the game by requiring collecting items to keep up with bosses, or change their level scaling so you can skip most items and complete the game quicker. The game even lets you change these settings during a game up until you recruit your third town member, so you can feel out if the difficulty is just right for your level of skill. Expert players even get rewarded with the game’s two major DLCs, a free Halloween themed bit with a double boss and an expansion of the post game hall of memories area, which up the difficulty significantly, the latter testing all your skills to the fullest. 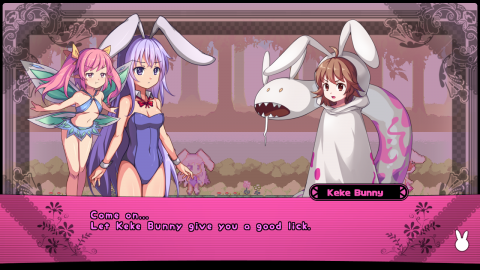 What makes Rabi-Ribi so engaging, though, is the silly style. From the script to the art style, the game is a delight to just watch. Characters all have wacky, punchy personalities that result in some amusing gags, the sprite animation an enemies is filled with cute little touches that give them unique personalities, and even the now finished score (the original released used some placeholder royalty free tracks) is brimming with pep and cartoonish themeing. It’s the sort of game that has an entire extra area that acts as one big in-joke for the users of the obscure social media service Plurk, where all the bosses are mascots of the service, including meat dogs and angry doodled cats. There isn’t a serious bone in the game’s body besides the main plot, which is basically treated as an afterthought, and most dramatic situations are solved through shenanigans or having a positive outlook. It’s a big silly joke every character is in on, and you get to follow along. That does make the last of the post game new chapters all the more surprising and impactful, as the one genuine human moment the game has in it isn’t wasted on something meaningless or shallow. 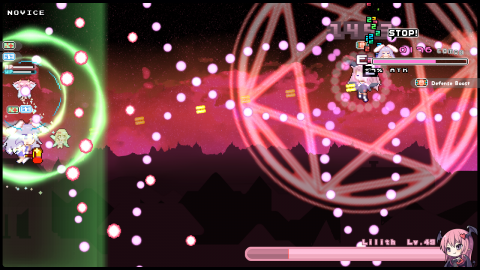 It may be a bit too “anime” for some, which is understandable. There are a lot of familiar and tired gags from old harem shows in here, but the energy and addicting gameplay loop make up for that. Rabi-Ribi is a love letter to many retro classics, but also manages to give itself its own identity by just embracing so many cliches that it forces itself to make them fun again. It’s good old doujin wackiness and well polished from a design standpoint, minor DLC glitches aside, and well worth a try, no matter how bad you may be at any of the genres mashed up in here. This is definitely a good first step into any of them.

Scar of the Doll, A
Night mode