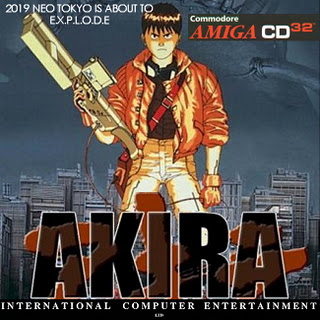 Akira has the dubious honor of being one of the worst Amiga games ever, voted 29 worst release by LemonAmiga users. Though considering it received the highest number of votes out of the top 30 worst titles, a total of 42 votes compared to only 12 for the de facto number one Luxor, you could argue that mathematically it’s the de jure absolute worst. This is backed up by infamously low review scores: 36% in Amiga Computer, 18% in Amiga Format, 18% in CU Amiga Magazine, 16% in Amiga Power. 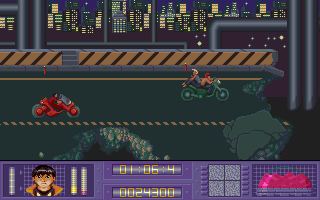 It’s a standard side-scrolling action game where you alternatively play as the orange jacket-clad Kaneda or bandaged-up monster-to-be Tetsuo, with levels divided between riding on your futuristic motorcycle and regular platforming areas. It hits most of the same notes as the movie, including a fight through the sewers and attacks by many angry clown faces. The reasons for its absolute shiteness are many. For a start it’s impossibly difficult. Not difficult in that you just need to practice, rather it’s so badly programmed some areas can’t be finished. 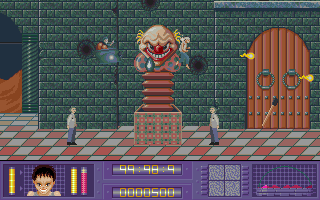 The starting level is so tough allegedly no reviewer could pass it, requiring the publisher give them level passwords. It requires perfect memorization worse than the third stage of Battletoads, and this is right at the very beginning. Even with an emulator, save states and rewind facility, the margin for error in Level 1 is non-existent. Hilariously Level 4 can’t be completed at all because a moving platform was placed beyond the reach of your jump. Enemies are stupidly tough, you’re extremely weak, and landing on the end of a platform causes you to lose balance and fall off. The structural design is ridiculous throughout: Level 3 features keycards, and while you can reach the exit collecting only some of them, the level only ends if you’ve painstakingly found all of them, otherwise leaving you trapped and waiting for time to run out. The only decent thing about it is the music, which was outsourced to Tim Bartlett. 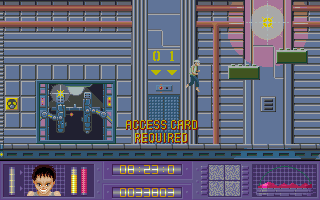 But how did it all go wrong? The Akira source material is so rich that game development should have been easy. Developed by ICE Software in the UK, I managed to track down almost everyone involved. Unsurprisingly, all were keen to distance themselves. First was lead tester Martin Blackmore, who also helped with the cinemas. Now a big shot at Microsoft, heavily involved with Kinect, he couldn’t recall how the game ended up so difficult: “I worked on Akira (Amiga) way back. I remember very little of the dev. Other than creating the cut scenes and photocopying a pic of a bug 100 times and sticking them all over studio. Each bug that got fixed, we pulled one down and crushed it. All-nighters eh?! Two AM madness!” 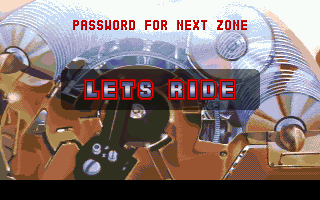 Next was Anders Johansson, now programmer on the Burnout games, and credited as the first of two programmers on Akira: “Sadly I don’t think there’s anything I can contribute to this, I had no involvement in anything design related and programming wise it was mainly back-end systems like loading, data compression and so on. Which I don’t remember much about now anyway.” 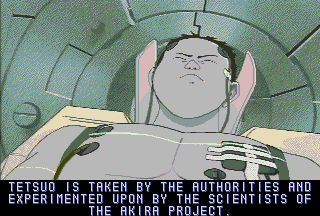 The lead programmer was Paul Atkinson, and presumably also the lead designer since no one else was credited. Finding him was a monumental task and required contacting his brother John at Codemasters. For the next six months I phoned once a week every week, sometimes two or three times. He said the next time he saw Paul he would bring up the subject – for whatever reason this took half a year. Eventually he gave me Paul’s email address, and he showed a willingness to be interviewed. During a follow-up email I received a reply from his wife, Lindsay Atkinson, who said he was ill. Six weeks later with no reply I emailed again, and Paul got his wife Lindsay to reply (sic): To be honest with you he does not see any point in doing it, It a waste of his time, he will get no reward and sort of payment for doing it. 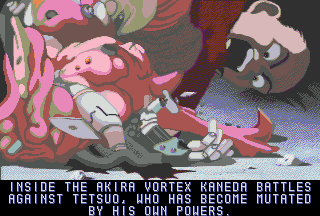 Curiously no one wanted to remember their days at ICE Software. During my research though, I managed to find someone willing to talk. He revealed interesting things about Deborah Isaac, head of production on Akira, and Stuart Bell, head of the company. For said person’s safety I agree to quote them anonymously: “Ah, Akira was developed before I joined. Deborah Isaac… well she ran the company with her husband Stuart Bell. They let the company go bust before they told us, after various excuses about why wages weren’t paid. My opinion of them isn’t high. ‘Manage their way out of’, and ‘wet paper bag’ spring to mind…” 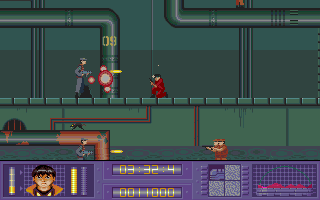 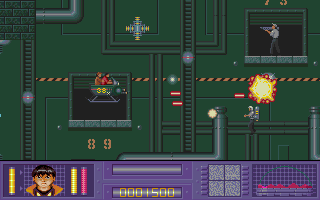 So there you have it, readers. Is it any wonder Akira on the Amiga ended up being so appallingly shit when you had people like that in charge of it?