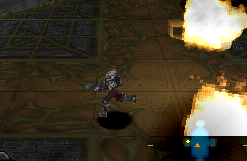 Blaster Master: Blasting Again takes place several years after the sequels, where our hero Jason marries his girlfriend Eve (whom you may remember if you happened to read that Worlds of Power: Blaster Master novelization of Blaster Master‘s story. That stuff became canon at some point apparently). They eventually have two children and settle down, until the lightning beings and the plutonium boss, Jason’s old underworld antagonists, return to cause trouble. Around this time, Eve and Jason pass away, leaving their teenaged son Roddy to carry on his father’s legacy in the updated Sophia J9, assisted by his sister Elfie. Interestingly, Sunsoft chose to release the game in Japan as Blaster Master and eschew all previous Meta Fight continuity. 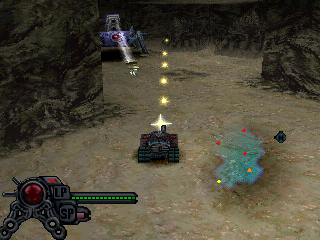 Similarly to other old game franchises, Blaster Master‘s foray into the 32-bit realm resulted in an upgrade to 3D graphics. Everything is now in third-person perspective, and a camera follows your movements. Unfortunately, the graphics are sub-par and have aged terribly, due to some extreme pixellization, and there’s a lot of loading between transferring to new rooms. The camera can be clunky and disorienting, often not focusing on areas you want it to and zooming in and out annoyingly. Also, the control feels a little off at first, taking some time to adjust to. It’s kinda hard to hit enemies since there’s no real targeting system. If you can get used to all these things, the game becomes more tolerable gameplay wise.

Unlike in previous Blaster Master games, you tank starts with only one side weapon, and others are activated a little later in the game. The side weapons can be upgraded to increase their capacity and power. Your tank (and Roddy also) has a new strafing dash jump that is useful for dodging enemy fire, activated by using the shoulder buttons. Roddy still has the upgradeable gun, but instead of a grenade launcher, he has a napalm attack that acts like a bomb and creates mini explosions around the area the napalm was planted. In addition, by pressing the appropriate button, Roddy can activate Hypersonic mode, which has him temporarily zoom around the dungeon room at high speeds, destroying everything in his path. Use of the Hypersonic is limited by a meter that must be recharged after each time it is enabled. 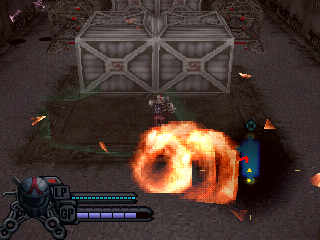 Roddy’s dungeon upgrades are applicable to the overworld, so he can use his gun at its current power level, napalm, and the Hypersonic there too. Bosses are fought by Sophia or Roddy alone, and usually have multiple parts you can destroy. The bosses, along with most of the enemies, aren’t easy, but shouldn’t be too tough to beat. The game is longer than previous Blaster Master games, and to reflect this, there are numerous save points scattered around. The music isn’t anything to write home about, but still remains decent. Most of them are either rock or techno inspired, and some even revisit themes from the original Blaster Master.

It’s doubtful that BM:BA will end up on anyone’s favorite games list, but it’s not as bad as one would think, especially considering that it initially retailed in America for $10. If you don’t have anything else more pressing to play, it might be worth your time to give this game a try. 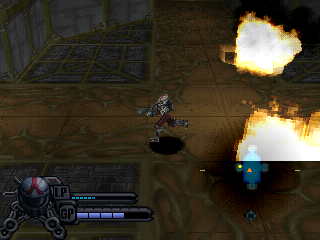