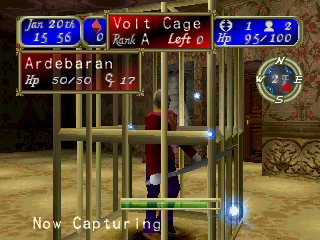 Tecmo’s Deception series is drastically different from the typical action/adventures games. Most give you a weapon of some kind and let you deal with your opponents directly. Instead, Deception puts you in the shoes of a protagonist without any weapons or fighting ability. What they can do, is control an elaborate series of traps to murder intruders with. And to survive, Deception doesn’t just expect you to kill those who get in your way. You frequently wind up killing innocent people, for no better reason than the fact that they were in the wrong place, at the wrong time. They’re weird, creepy games, unlike anything else on the market.

After returning from a long journey, the Prince of Zemekia (the player) comes home to find his father murdered, and himself framed for the crime. Adding insult to injury, his brother, responsible for the framing, also steals his fiancé from him. Rather than take his execution lightly, the Prince decides to make a pact with the devil. Soon after his supposed death, the Prince is given control over a castle, and the power to get revenge, and aid in his benefactor’s resurrection. Since the devil is kind enough to give the player control over a mansion, the Prince is tasked with defending it from outside intrusion, which usually consist of nosy knights or hapless villagers. Along the way, the player learns of the only way to defend himself from those who would do him harm: by summoning traps.

As you walk around the mansion, you pause the game and bring up a screen which divides the room into a series of tiles. Here, you set the trigger points for the traps you want to set. You can assign up to three, each one triggered by one of the controller buttons. The traps come in several varieties. The typical sort just inflict damage, while others can launch their victims in an assortment of directions, or hold them in place for other traps to do the deed. You can place traps on floors, ceilings, and walls. 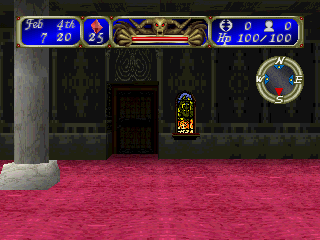 Available traps come in three key assortments in the first game – Capture, Destroy, and Confused. Each with a different effect on their victim. Heavily armored targets take longer to kill, and the ones with weapons can easily kill the player if he lets them get too close. In between missions is where new traps can be created, existing ones can be modified, and the castle itself can be upgraded with newer rooms and death-dealing equipment. Unfortunately, there’s no linking of traps, and all the setting has to be done in a special room in the castle. Worse, traps are limited use, and vanish before long. So if you don’t have enough traps set to take out a victim, you have to go back to the room and place a whole new array of them.

There are about thirty different traps altogether, all sadistic in one way or another. Some are simple, like Bear Traps to bite into the victim’s legs, but others are pretty hilarious, including dropping buckets on their heads to temporarily confuse them, or stomp them with a gigantic foot, Monty Python-style. Try dropping them into pits, or cause the floor to rise up, smashing them into the ceiling. Use a magnet to pull them into the wall. Stab them with spears, whack them with cranes, set them on fire.

You can also summon monsters with the bodies of your defeated foes. Some of these include zombies, werewolves, she-devils and dragons. They’re costly, but can independently be leveled up to become stronger. Of course, having them kill in your stead will also rob you of experience. There are also masks to purchase, which can attract or repel certain enemy types, allowing you to manipulate them into the trigger points. 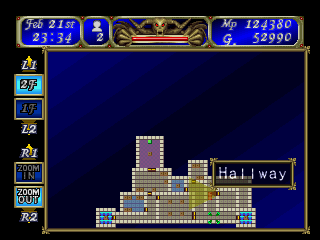 Of course, the challenge not really comes from just setting the traps, but also springing them. Since you’re unarmed, the only thing you can do is run and lure the enemies near the glowing trigger points, and then time them just right so they hit. If you miss, you’ll need to wait a few seconds for them to recharge. If you spring all of the traps too hastily, you’re left to run around and stall for time, hoping you’re not cornered and killed in the meantime. This is all bit difficult to pull off, because the entire game is viewed from the first person perspective. It’s very hard to get a view on your enemies to trigger the traps when you’re trying to run away from them! Deception was also released before the analog PlayStation controllers were released, so the digital movement scheme is clunky, to say the least.

Presuming you succeed and damage your enemy enough, you get to decide what to do with their remains. This is a feature unique to the first Deception, as in later games, once they’re dead, they’re dead. Here, you can either offer their soul for MP, or sell their remains for gold, to buy newer traps or improve existing ones. While early on, the player only has to kill an assortment of stupid knights, some later targets can become morally taxing. For example, there’s a mission that makes you kill a family looking for a cure for their sick child.

The whole game takes place entirely in the mansion, with each new level sending in more and tougher opponents, sometimes up to two at once. You are, however, given the option to expand your mansion by building entirely rooms. This level of customization is pretty cool, but it has a price – due to all of the data, it requires nine blocks of memory card space, taking up a decent chunk of real estate. There are also multiple endings.

The first Deception is the most unique of them all, because many elements – the mansion customization, the first person perspective, and so forth – were changed in the second game, which then became the standard for the rest of the series. It’s unique in that respect, although it feels barebones by comparison, and the awkward movement does it no favors either.

As a fun aside, you can create a monster from Deception in Tecmo’s PlayStation game Monster Rancher by using the Deception game CD.