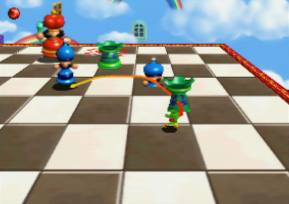 It didn’t take long for Japan System Supply to follow up with Chameleon Twist 2, releasing first in Japan this time on Christmas day of 1998 and then North America in April 1999. The quick turnaround shows, as this sequel doesn’t stray far from its predecessor. While the Chameleon Twist formula still holds up and this game does make some welcome improvements, it was likely too little, too late. By this point in time, the Nintendo 64 had gotten some of its heaviest hitters such as Banjo-Kazooie, The Legend of Zelda: Ocarina of Time, and Mario Party, which likely caused Chameleon Twist 2 to get lost in the shuffle. This would be the last console game Japan System Supply developed before their bankruptcy in 2000.

The game starts off in the same way as the first game, with your chameleon once again following the rabbit into a different world, except this time they get launched upward into the clouds when the rabbit lands on their seesaw. If you’re playing the international version, you’ll notice that the chameleons look completely different, resembling the actual reptile a bit more and also sporting a backpack. The four chameleons from the first game return, though Davy and Jack have been inexplicably color swapped. The Japanese version retains the designs from the first game, so one has to wonder if this was an attempt to market towards other regions more effectively. 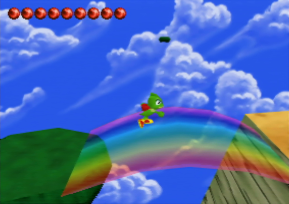 The title screen bears the slogan of “High Voltage Screaming Action”, which sounds completely ridiculous but actually holds some truth. Chameleon Twist 2 is significantly faster than its predecessor and your arsenal has been upgraded to match the pace. Your tongue has been greatly extended and now lets you cling to walls, allowing you to pull off some truly impressive wall jumps and long distance maneuvers. The quick rotation can now be done vertically, which comes into play often with the game’s increased emphasis on verticality. Whenever you eat enemies, your chameleon no longer slows down to accommodate your intake, letting you stockpile ammunition without leaving yourself vulnerable to the faster foes you’ll face. Your backpack isn’t just for show either, as it contains a parasol that can be deployed to slow your fall or ride air currents, making for much more reliable platforming. Temporary power-ups can also be found, but these bizarrely tend to hinder more than help, burdening the player with things like a shortened tongue, decreased movement speed, or a big head that doesn’t do anything. The multiplayer mode has also been removed entirely, which is a bit of a shame as it likely would have benefit from this game’s improved mechanics and would have made better use of the power-ups.

There are once again six worlds to traverse, but they’re significantly greater in size. The approach to level design this time is completely different as well, emphasizing linear routes with obstacles, secrets and enemies sprinkled about, giving the game a feel closer to something like Super Mario 3D World. The camera has been altered to match this change in structure, as it typically remains zoomed out so that the player can see more at a glance. That is, in theory – the camera actually ends up being even more of a hindrance this time since the player has even less control over it and it has a tendency to angle itself in a way that obscures anything not dead center. This creates some frustrating moments where you’ll have to make blind leaps of faith or quickly react to enemies from behind. Luckily, the infinite continues, generous checkpoints, and large health pool all return to compensate for any trial and error. 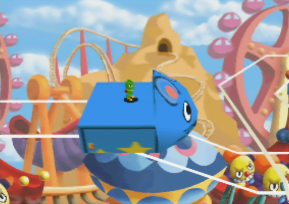 While finishing Chameleon Twist 2 remains a relatively easy task, full completion is now significantly more difficult. Instead of crowns, each world now has a carrot as well as 20 coins to collect. The coins are spread throughout the worlds, with most of them requiring a careful eye or some platforming feats of derring-do. The carrots are more difficult to find, but have the benefit of unlocking a minigame in each world. The minigames are just for fun in the Japanese version, but the international version ties one coin in each world to obtaining a high enough score in the corresponding minigame. Your reward for collecting all 20 coins in a world is a new costume for the chameleon you’re playing as, like a Santa Claus outfit for Davy or a ninja outfit for Linda, so it’s at least a nicer reward than what the first game provided for completionists.

Like the first game, the stages this time around offer diverse settings with plenty of setpiece moments and creative obstacles to face. Sky Land serves as an effective starting level, letting you acclimate to all the changes while you do things like cross over giant windmills and ride a hot air balloon that birds attempt to weigh down. Carnival Land goes all-in on its concept, with tonally appropriate things like ferris wheels, a rollercoaster sequence, and even foes based on food like French fries. Ice Land (not to be confused with Iceland!) is exactly what it sounds like, challenging players with very slippery surfaces and a cool moment where you have to score a goal in an ice hockey rink. Great Edo Land brings back some of the Ghost Castle’s ideas, like the feudal Japan aesthetic and having to light candles to clear a path while also putting your vertical quick rotation skills to the test. Toy Land is very similar to Kids-Land from the first game, with its focus on intense platforming challenges under the deceptive veneer of a bright, welcoming color palette. The game culminates with Desert Land, which feels like an odd choice to end on until you see how it tests your mastery of tongue maneuvers and wall clings to solve problems like climbing large constructs or an Indiana Jones-style giant boulder sequence. 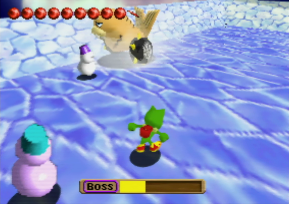 Bosses are probably the most underwhelming aspect of an otherwise mostly improved sequel. They’re just as if not more creative than the bosses in the first game, including things like a giant hamburger that launches its ingredients at you or a frog dressed like a Japanese daimyo, but they suffer from the same problem of all being defeated in the same way – avoid attacks, eat up all the minions/projectiles, and spit them back until the boss falls. They’re quite a bit more challenging this time as well, since they generally take place in smaller arenas with greater numbers of minions around and have much faster attacks. Their difficulty is also exacerbated in the international version, with inflated health bars that result in some bosses taking dozens of hits to defeat.

The visuals in Chameleon Twist 2 are dramatically improved, with environments having far more detail and vibrancy. There’s also much more unique visual flair per stage, with things like sarcophagi littered around Desert Land and Toy Land dedicating a section to a detailed crane machine containing toy versions of the chameleons from both games. Enemies and bosses tend to be much larger this time around as well, with more enemies incorporating full 3D graphics and bosses like the giant robot of Toy Land towering over you in an impressive use of scale. The music remains just as peppy as it did in the original game while also employing better instrumentation, such as the use of the shamisen in Great Edo Land. The unique boss themes are also retained, which helps add a bit of character to each fight.  The soundtrack ends up having a very homogeneous sound though, with a lot of tracks having a similar tempo and rhythm that does fit the faster pace of the game, but ends up making them difficult to separate from each other after the game is over. 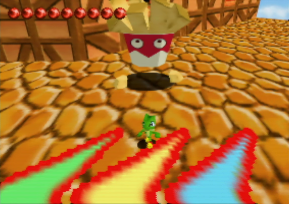 Chameleon Twist 2 stands as a safe sequel in a time where gaming was innovating far beyond anyone’s imagination. When games like Final Fantasy VII and Metal Gear Solid had already changed what people expected from video games, perhaps there was no room for a humble 3D platformer to make waves at the time. The series has been long since forgotten and buried, but in modern times where 3D platformers are precious and rare, they’re worth rediscovering, even if only as brief comfort food to remind oneself of a bygone era.

https://tcrf.net/Chameleon_Twist_2 – Details the changes between versions