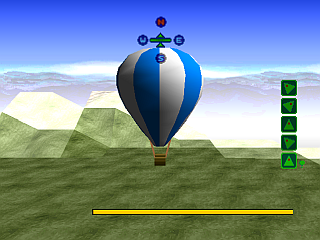 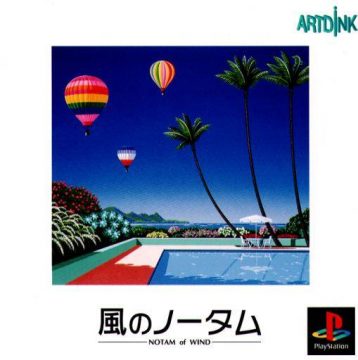 Why do people explore virtual worlds? It’s a question without any one answer, for there are as many answers are there are games with worlds to explore. Yet somehow, Kaze no Notam stands out from many other games by directly confronting that question in a way most games don’t. This hot-air balloon simulator comes courtesy of Artdink, a minor developer perhaps best known for making experimental games that initially received a lukewarm reception, like Aquanaut’s Holiday and Tail of the Sun. Kaze no Notam clearly falls within that same category of games, for better or for worse. The game is overflowing with fantastic ideas, and while it’s perfectly capable of realizing them, its structure and interface serve to subvert its intended goals.

Before going into more detail about that, it’s worth mentioning that NOTAM still works within the general framework that many of its peers helped to establish. At the dawn of the 3D era of games, many game developers saw unlimited possibilities. Everybody wanted to create expansive worlds that no previous system could render, and give players the power to do things they could never do before. At least in that first regard, Kaze no Notam is no different. Driving the game is a powerful ambition to create fantasy worlds whose splendor the real world could never match. That may not be immediately apparent, given how ordinary a lot of the environments look, but eventually, you’ll spot it: a city floating in the sky, or the crumbling ruins of some long-forgotten civilization. Far from feeling ordinary, these worlds feel like evocative paintings with stories to tell. Granted, they can often feel very eerie, since you see only the barest signs of life wandering about these empty worlds. Yet it’s hard to deny the sense of awe and majesty the game is able to communicate through those worlds.

Where the game differentiates itself from its contemporaries is that it emphasizes seeing over doing. While there’s an undeniable fantasy element to NOTAM‘s worlds, the more immediate impression they leave on you is a more tourist-y one. Before you even choose which area you want to visit, you’re confronted with placid blue skies; slow, soothing music; and a pared back minimalist interface that’s oddly reminiscent of early Windows computers. It’s all enough to make you feel like you’ve walked into a travel agency and are flipping through brochures to decide where you want to go on vacation. The environmental designers must have taken inspiration from those brochures, because the feeling continues even as you’re playing the game. Some of the areas you’ll float over include a castle town just outside a forest, a coastal city, plateaus in what’s presumably the American West, etc. In spite of this variety, there’s a common thread unifying each of these locations: they’re all calm, tranquil spaces that were specifically engineered for you to forget your worries. There’s no sense of urgency here, no call to action, because the game doesn’t want you to worry about what you’re supposed to do. It just wants you to relax, let go, and put your mind at ease. 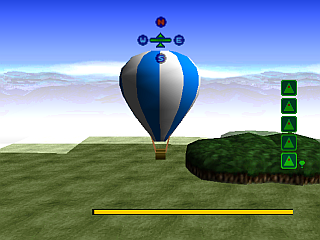 And what better way to relax than to free the player from any and all restraints – including their desire for complete control over their experiences within the game? This is another breaking point for Kaze no Notam: rather than give the player a diverse range of actions and unrestricted freedom to navigate the world with ease, it instead withholds as much control from the player as possible. The game’s ostensibly about controlling a hot-air balloon as it floats through the air, but you’d be surprised how little control the game actually gives you over where that balloon goes. No matter what you do, the winds and the balloon’s own momentum will do as they please. The only thing you have any real control over is the little flame that controls the balloon’s altitude. Not even a person who controls the burner, but the flame itself. NOTAM goes so far as to remove any means of identification within its worlds.

In doing so, the game is able to remove a lot of barriers that stand between you and a full appreciation of the world. You learn to let go of your desires because with such limited means of enacting those desires, holding onto them loses all meaning. Liberated from want, your attention now turns to what you’re experiencing in the moment: you’re free to drink in all these sights that challenges, goals, and other extrinsic motivators would otherwise have distracted you from. NOTAM‘s decision to remove the self only plays further into that: first, it places a greater emphasis on the natural forces acting on you. Second, without the mediating force that is the self standing between you and nature, you’re able to form a stronger bond between the two forces.

Or at least that’s what’s supposed to happen. In practice, while NOTAM excels in building a world, it struggles in fostering a meaningful connection between the player and that world. Most of the game’s problems stem from faulty assumptions about how these connections are made. Although there’s nothing stopping you from jumping into the levels and floating about as you please (the game has a mode that lets you do just that), NOTAM is ultimately structured around rounds, each of which asks you to complete a specific goal. One round might ask you to shoot markers so they create a triangle with X area, and another might tell you to hunt down and shoot a certain animal balloon.

Artdink clearly intended for players to become more involved with the world through these challenges, but they failed to consider how players were going to engage with the world. In practice, you’ll find yourself focusing more on the interface (since that’s where you get the information you need to complete challenges) than on the actual physical sensation of flying. The forests, the mountains, the villas – their importance is secondary to the five arrows on the right and the little balloon icon that floats alongside them. It’s hard to deny how divorced this leaves the game, like the game has abstracted away its own world in favor of a sparse representation of it. In any other game, that angle might have worked. But in Kaze no Notam, such abstraction only distracts from the game’s greatest assets.

And in another sense, structuring the game around rounds encourages you to hold onto desires the game would rather you not have. Even as the game takes away most forms of control, the challenges are willing to create reasons for you to lust after the control you can’t have: prestige, power, mastery over space (albeit in a loose sense). The ability to customize what your balloon looks like works along similar lines, encouraging some form of personal identification in a game that works better without it. That’s not to say these features lack appeal. At its best, planning routes for your balloon feels like a round of golf: meticulous, precise, serene, calculating. There’s a sort of ideal mathematical beauty to finding out what exactly you need to do and making sure that’s all you do in the game. You just wish that also included the holistic appreciation of the world that the game works so hard to build.

One also has to wonder to what extent Kaze no Notam achieves its goal of making these upper-class experiences available to everyone. There’s an undeniable air of wealth to the world and what the game would have you do in it. Who could afford to empty such vast expanses of land just so they could look down on it from a hot-air balloon? Not many people could even afford to ride in that hot-air balloon in the first place. However, many more people would have no problem buying NOTAM and the PlayStation that’s needed to play it. This speaks not only to an honesty on the game’s part about who’s normally allowed to enjoy these activities, but also a desire to tear down barriers and open things up to as many people as possible.

Conversely, the game’s decision to leave overlook some major barriers – namely, the various challenges – becomes that much more confusing. By including them in the game, Artdink assumes that the player has the necessary leisure time in which to practice and eventually master whatever demanding challenges they’ve been offered. This is especially true in light of how random the winds can be, thus increasing the amount of time you’d need to complete the game. For those who have the free time they need to meet NOTAM‘s demands, problems are few and far between. But for those without it, it feels like the game has erected an unnecessary wall between them and a world they could otherwise enjoy. So all the rounds achieve is to connote the same sense of luxury that NOTAM wishes to expunge from every other part of itself. 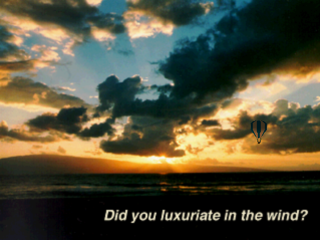 After you’ve completed all nine of the game’s challenges (which is no small feat), the game confronts you with this question: “Did you luxuriate in the wind?” Because the word “luxuriate” can have two different connotations, Kaze no Notam is essentially asking the player two different questions at once – one of them being easier to answer than the other. If you interpret the game’s question as asking if you enjoyed the luxury that it offered you, then it’s easy to answer yes. But if you interpret it as, “Were you able to relax?”, then it becomes much harder to answer. What about Kaze no Notam leaves a stronger impression: the majestic realms you were permitted to float through, or all the unnecessary barriers that prevented you from fully enjoying them? That’s not as easy to answer as you might think.