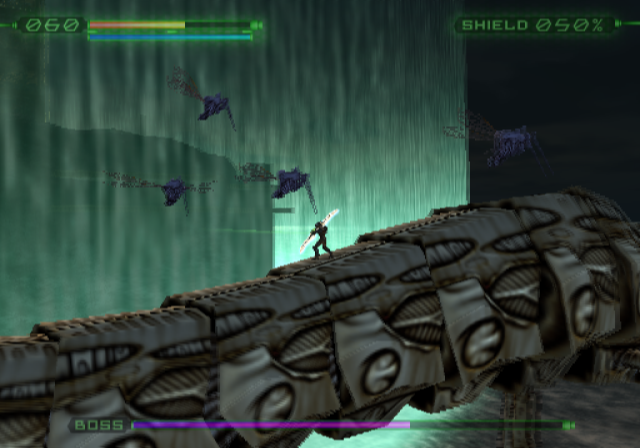 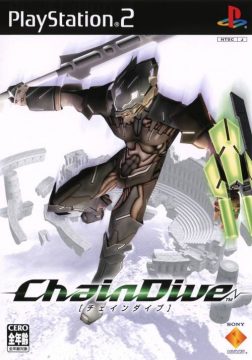 Until the 2009 reboot of Bionic Commando, Capcom’s acrobatic wire swinging series lay solely in the realm of 2D. For those that wanted something similar, the closest anyone could get was the vaguely obscure PlayStation 2 title ChainDive. Released only in Japan in 2003, it gained a small word-of-mouth following due to its inclusion on a demo disc for the Official PlayStation Magazine (issue 79), but despite being published by Sony, was not chosen for localization.

The hero is a warrior named Shark, who wields a sword called Unbreakable, and carries a grappling hook called the plasma chain. He must defend the planet of Elm from invaders, protecting their many princesses. 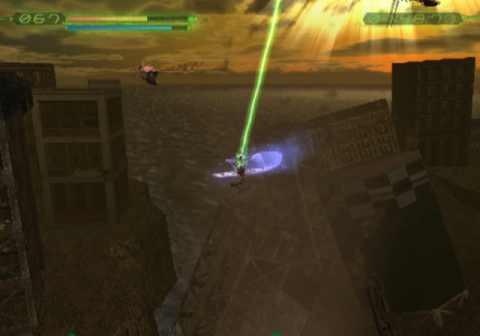 Despite being a 3D game, all of the action takes place along a 2D axis. The plasma chain works a little different than other games, though. All throughout the stages are little green orbs that act as grappling points. As long as you’re vaguely in the vicinity of one of those orbs, the hook will automatically shoot towards it as long as you’re pressing the button, even if it’s not visible on screen. The physics also work a little differently than other games with grappling hooks. Since your plasma chain acts like a slingshot, it’s important to keep up the momentum and travel quickly. You can also hang on the orbs and twirl around in 360 degree circles, which is good for taking a stand against large numbers of enemies.

In most stages, these orbs are scattered around liberally, making it easy to fling yourself around the stage. However, it’s not always consistent, and it’s truly annoying when you try to send yourself in some direction and expect to latch onto something, only to flounder helplessly and fall to the ground. You are equipped with a sword, although this does not directly harm enemies. Instead, it freezes them, which then turns them into grappling points you can latch onto. You can then swing around and pummel them until they shatter. Destroying multiple enemies in quick succession will build up a combo – high combos will restore a portion of your life meter based on your performance. This is especially important to note, because the game moves so quickly, it can often be difficult to tell when something is going to damage you. Thankfully, you have a long life bar, and it’s usually possible to fully regain your health if you’re adept at chaining kills. 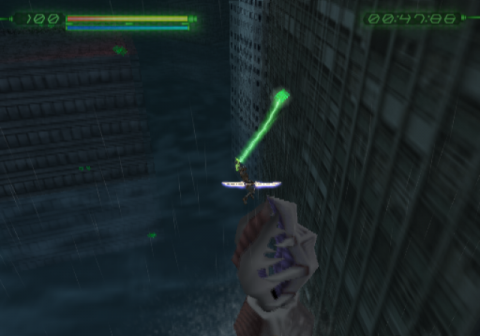 Each of the game’s levels have different goals. Sometimes you simply have to make it to the end; other times you need to hunt down and destroy a certain number of items. Some areas are developed on a circular track, making them easy to explore without having to double back. Some levels consist of boss battles, or in one case, a race against a boss. The variety helps things from getting too stale, but certain types of missions are more aggravating than others, especially the ones where you need to protect friendly aircraft for a certain of amount of time. Given the perspective and lack of a map, it’s hard to tell where enemies are attacking and where you need to go, which is especially frustrating when you’re on a time limit.

In screenshots, ChainDive is not pretty, but visuals are kept intentionally sparse in order to keep the game running at a 60 FPS. There are typically numerous tiny enemies on screen at the same time, and the game usually keeps up the pace in spite of being inundated. It’s one of those games that looks far, far better in motion, as you fling through the sky, spin around grapple points, and smash up enemies, in some sort of mid-air ballet of destruction. There’s a sense of dizzying excitement in watching this, let alone playing it – few others can provoke a similar sensation, outside of the Zone of the Enders series and maybe the two PS2 Shinobi games. 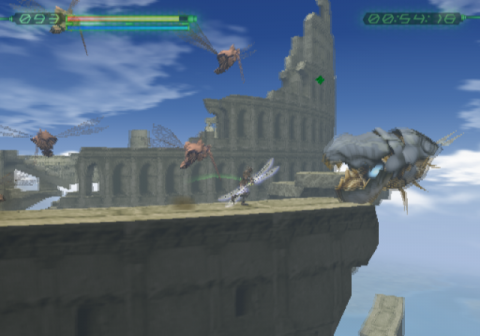 Yet, at times it can look attractive. There’s a lot of visual variety to the game, ranging from post-apocalyptic cities, to alien landscapes, to mountain ranges to ancient, floating, Roman-esque ruins. Easily the most impressive stage is where you’re riding on top of an airplane as you protect it from smaller creatures. The chaos regularly sends it tilting back and forth, as you scramble for something to hold on to. The boss battles are equally as impressive due to their sheer size and scale. The design of the setpieces most definitely overshadows any technical deficiencies the game might otherwise have.

ChainDive isn’t particularly long, and while some missions may frustrate while you figure out the trick to beating them, it really isn’t all that difficult either, and can be completed within a few hours. There are time trials and combo trials unlockable after completing the game, giving it some replay value. This way you can also skip around and concentrate on replaying the better or more impressive levels, without having to worry about the annoying ones. 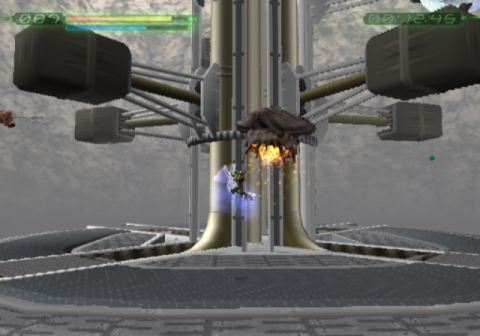 The inconsistency in its stage design is really the only major issue about ChainDive though, and the simple joy of spinning around wildly and smashing stuff is gratifying enough that it’s never truly a problem.

The development team, Alvion, went on to develop Malicious for the PlayStation 3 and Vita, which is also worth checking out. They also aided Platinum Games with other fast-paced action titles, like the Bayonetta series and Metal Gear Rising: Revengeance. The soundtrack was composed by Yuji Takenouchi, who hails from the old school Konami sound team, having worked on Metal Gear 2.