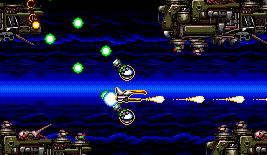 It’s always rather nice when developers try to give shooters a storyline. Gleylancer, released only in Japan for the Mega Drive by NCS / Masaya, features a cast of characters that you never really see outside of the intro, ending, and a few brief cutscenes. But it adds a lot of personality to a genre where you control a cold, steel spaceship surrounded by things that will shatter you with a mere tap. It makes you feel terrible when you get killed. 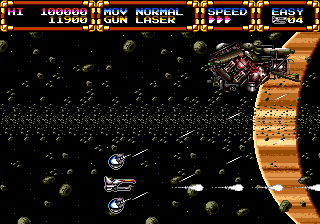 The heroine of Gleylancer is Lucia Cabrock, a rookie pilot in the space fleet. When she hears of her father’s mysterious disappearance in some kind of warp, she immediately commandeers one of her ship’s best fighters – the Advanced Busterhawk Gleylancer – and sets off to comb the farthest reaches for signs of her father. While the story doesn’t play an integral role in the game, only popping up in cutscenes every few stages, there are two different endings depending on if you can save Lucia’s father in the final areas of the game. Oddly enough, the bad ending’s credits are in English, while the good ending’s are in Japanese. 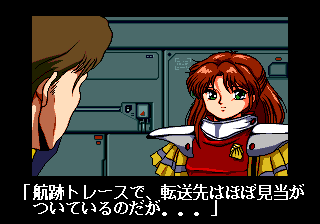 Outside of the story, Gleylancer doesn’t seem any different from the hordes of other side scrolling shooters on the Genesis, and it’s easy to just write it off as a Thunder Force clone. But it’s the game’s brilliant mechanics that make it stand out. Much like most shooters, you have two satellites which can fire weapons. However, these satellites can be aimed in any direction, allowing far more versatility than your usual space shooter. Additionally, holding down the C button will lock your satellites in place, allowing you to shoot independently from your movement. This mechanic was later used to a similar effect by Konami in Gradius V.

There are several different formations to choose from, including Shadow Options (so your satellites move the same as Options from Gradius) or Rolling Options, which spin around your ship. There’s even an Auto-Target Option, although the game warns that it’s not very accurate. Naturally, the game puts these to good use, as enemies pop up from every corner in the screen. There’s also a solid arsenal – amidst the usual twin shots, lasers and multi-directional beams, there are flamethrowers, laser sabers, and the most useful one, the Bounce gun, which shoots green bullets that ricochet off surfaces. 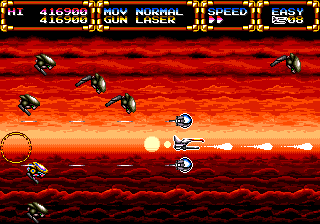 It’s a good thing that Gleylancer has these aiming satellites to play around with, because the level design is somewhat hit-or-miss. Some of them are fairly simple landscapes, with nothing but open space, as you simply mow down whatever pops up. Others are slow paced and more methodical, taking pages from the book of Gradius. Needless to say, the latter are more interesting, although none of the stages are flat out boring.

The difficulty is finely tuned, if somewhat scattershot. Getting killed means getting sent back to a checkpoint, which makes some of the boss battles somewhat devious. Some of the satellite and weapon combinations can make the game a little too easy, with the only real danger being an occasional stray bullet, or an enemy suddenly appearing on the edge of the screen. There are nine stages, making for a game of reasonable length. 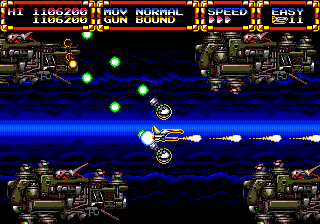 The enemy designs are also all over the map as far as quality – some of them simply ape the Gradius games, and others are just plain generic. There are a few cool sparks in imagination, especially with the enemy that attacks in the form of a Hindu goddess.

The graphics are reasonable, with some decent parallax scrolling, but nothing that hasn’t been done better on the Genesis elsewhere. The music is excellent FM synth rock, with a handful of standout songs (the first level in particular.) Much like Life Force, there’s a voice that narrates certain events, warning you of obstacles or relating inspirational musings. (“Stick to it, and believe in your power!”, it says right as the game begins.) In typical Genesis nature, the sound quality of the voices is tremendously scratchy, but they’re amusing nonetheless. 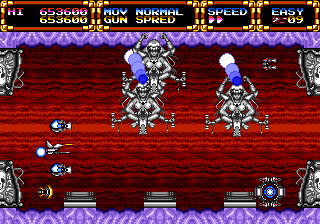 While the level design lacks polish, the ability to aim your weapons really opens up new doors for shooter gameplay – after playing Gleylancer, every other game seems so strict, with just the ability to shoot in pre-determined directions. That’s the trademark of an excellent game, and Gleylancer sits nicely next to Thunder Force IV and MUSHA as one of the best shooters on the Mega Drive. 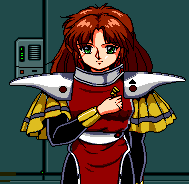 Unfortunately, it’s excellence combined with its relative rarity means it’s one of the more expensive games on the Mega Drive. It has been re-released a few times, at least – it was released internationally on the Wii Virtual Console, and even the Mega Drive version saw a re-print with a new cover art focusing on Lucia. In 2021, it was also ported to the Switch, Windows, Xbox One and PlayStation 4 and 5, with a bunch of handy features added to the emulated ROM. In addition to save/load states and rewind functions, you can switch between satellite types at any time, as well as aim them using the right analog stick. Plus, all of the cutscene dialogue has been translated into English.