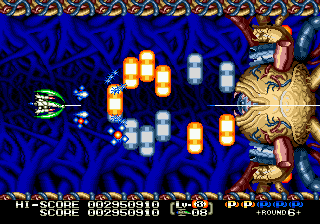 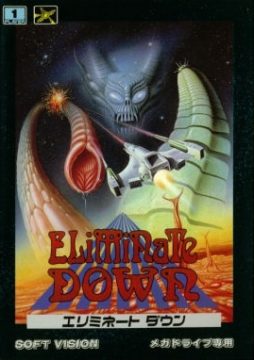 Names like Konami, Irem and Toaplan dominate the discussion of great 16-bit shooter developers, but few words are ever spoken about Aprinet. This is because they only developed a single game, a low key title for the Genesis with the baffling name Eliminate Down. Despite their inexperience, it’s an excellent game that pushes the system to its limit with fantastic graphics and clever design. 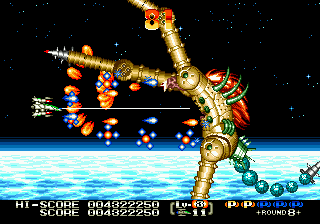 Eliminate Down is the spiritual successor to Toaplan’s Hellfire, in that it’s a horizontal shooter with different weapons you can switch between on the fly, each aiming in a different direction. Hellfire had four, while Eliminate Down cuts it to three: a forward shot, a backwards shot, and a diagonal shot similar to Darius‘ bombs. Unlike Thunder Force, these weapons are always available without the need for power-ups, and are cycled through with the A and C buttons. You also have low-powered primary gun, which also fires no matter which other weapon you have equipped, but it’s not particularly powerful.

Weapons are all upgraded at once by collecting five Ps. You can also collect Es to upgrade your main gun, eventually turning it into a powerful laser. When you die, your weapons go down one level, while your main gun reverts back to its weakest form. Your Ps, however, do not go away when you die, so leveling back up is usually not a major problem. 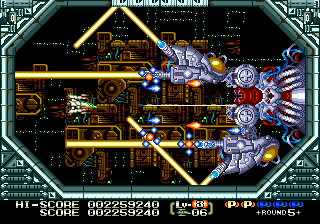 The front shot shoots red and blue lasers and gets wider as it’s powered up. Fully upgraded, the front shot shoots gigantic balls with smaller balls circling around it, covering a wide area. The vertical shot fires torpedoes in two diagonal directions in front and shoots in an “X” shape when upgraded. When fully upgraded, the torpedoes move along surfaces, much like the bombs from Gradius. The back shot fires huge yellow triangles. When it’s fully upgraded, back shot shoots giant “Z” shaped projectiles that bounce off of walls in the two back diagonal directions. Interestingly, your back shot is much wider than your front shot and is capable of doing just as much damage. Mastering these weapons and knowing when to switch between them is key to survival in Eliminate Down. Enemies come from all directions and will often try to chase you.

You can also collect Bs to put a barrier around your ship. The barrier absorbs roughly three hits before turning red and three hits after that before going away. You will need these extra health points because Eliminate Down is very hard. The first three levels are pretty easy, but once level 4 starts, the game stops pulling its punches. The levels are overflowing with enemies, so it’s easy to get overwhelmed, and the bosses are huge, usually taking up more than half of the screen, with the other half being filled with their attacks. There tends to be a sub boss in each level too, which are sometimes more difficult than the regular boss. There are also traps everywhere, making some levels pretty much require memorization to clear them. The screen scrolls pretty fast in some parts too. Luckily, you respawn where you died, taking away the frustration of going back to a checkpoint and doing everything again. 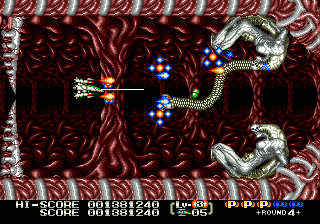 The highlight of the game is its level design, as many of them are unique and features omnidirectional scrolling. These winding levels add a lot to the overall feel of the game, especially since they put your skills with the various weapons to the test. The first stage features the launch of your fighter as it flies through the first level fleet of enemies, descends into the atmosphere of a plant while fending off a barrage of missiles, before finally reaching the Mars-like surface and facing off against the boss.

The music is the sort where you really have to have an appreciation of FM to enjoy. It’s mostly fast and intense rock, with slower and creepier music playing during certain boss segments. The obnoxiously synthy sound effects tend to drown it out, but otherwise it’s more than suitable.

The graphics during all of this are mighty impressive. At first glance it doesn’t look too different from the standard 16-bit shooter, although even on that level of judgment it’s well done, featuring huge and colorful sprites. There are some rotation effects – rare on the Genesis – as well as bits of three dimensional designs, like the first bosses’ drones, which moves in and out of the foreground. The larger bosses consist of many smaller sprites stuck together, for the sake of smoother animation. Granted, some of their designs are reminiscent of other shooters – some of the mechanical designs and bosses may have been taken from Gradius, a few creepy biological monsters are similar to R-Type and its lesser known little brother X-Multiply, and the practice of sticking human faces and features on metal is taken from Masaya’s Wings of War / Gynoug (otherwise known as the predecessor to Cho Aniki). And yet in spite of being clearly inspired by all of these games, it very clearly feels like its own game, owing to not only the talents of both the artists and designers. It’s hard to say that Eliminate Down is particularly innovative, but it’s so damn well put together that it hardly matters. 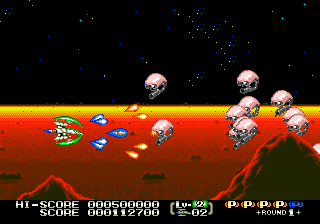 Beside the main game, there’s also a minigame, though it’s mostly a tech demo showcasing the programmers’ skills in using rotation effects on the Genesis. You move a cursor around and try to hit the ships while they’re spinning. They stop spinning almost as fast as they start and your cursor moves slowly, so it’s more difficult than it looks. As time runs out, everything except your cursor gets a lot faster, so you really have to keep up. Even though the minigame isn’t particularly good, it’s a cool addition and even saves your high score.

Eliminate Down may only have been released in Japan and Korea, but it’s also region free. Unfortunately, it is also one of the most expensive games for the Genesis, typically going for over 100 US dollars for bare cartridges, and quite a bit more for boxed copies. The South Korean version was published by Samsung, instead of Soft Vision, but is not different at all from the Japanese version.