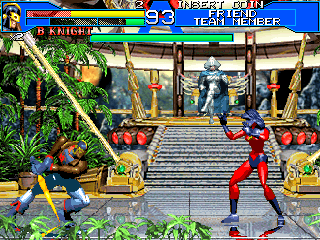 Games that make heavy use of pre-rendered assets for their graphics have a well earned reputation for featuring polarizing visual presentations. For every fondly remembered Donkey Kong Country or Resident Evil, there are some garish releases best left forgotten that appeared dated and ugly even when they were new. Avengers in Galactic Storm casually slouches across the exact midpoint of these two extremes.

The Marvel characters’ ultra bright costumes and the game’s uninspired backgrounds make for a truly hideous-looking game. Yet it has relatively tight controls, and some thought put into having each of its characters fight in a way that complements their abilities, making each one unique. The game even offers some pretty smooth animation! Despite the questionable first impression, this is a far better game than Rise of the Robots, and other legendarily disastrous attempts at combining then-trendy pre-rendered sprites with the fast action of a one-on-one fighting game. Had it been released two years earlier, in a pre-Capcom Marvel fighting game world, it may have even gotten some attention. 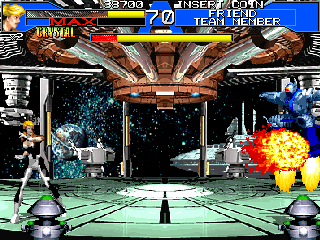 Unfortunately for Data East, a 2D fighter not published by SNK or Capcom in 1995 had very little chance of being noticed at all, and Avengers‘ rough look immediately condemned it to obscurity. If one actually managed to see it in an arcade, it would be easy to ignore with a Neo Geo, X-Men vs. Street Fighter, or Virtua Fighter cabinet right next to it. It’s worth a play as a curiosity for fighting game and Marvel fans to see what were considered important characters at the time, but it’s still a letdown compared to Data East’s earlier fighting game efforts like Karnov’s Revenge and Outlaws of the Lost Dynasty.

The game only has nine characters (eight of whom are playable – Captain America, Black Knight, Crystal, Korath, Dr. Minerva, Shatterax, Supremor, and Thunderstrike), and no cool secrets or variations on them. This already puts the cast on worse footing than other low-roster fighters like Mortal Kombat or Kizuna Encounter, and makes its character select screen look downright anemic compared to the most popular 2D fighters of the late 90s. While each one is unique enough, the game is completely unbalanced. This is a huge letdown for a game that has such a small roster to begin with, with characters like Crystal easily dominating the entire roster. This also makes the game’s single-player story mode more frustrating than it should be, since one may hit a brick wall against the computer quickly based more on the character they chose than on their skill level. 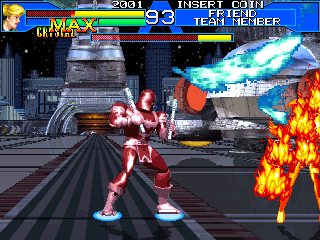 Players may choose to start the game in a more typical arcade mode where they can choose any character and pit them against the rest of the roster. While it’s nice to see Data East embrace the game’s source material (Galactic Storm is also the name of the major comic storyline upon which the game is based), the story mode is so underwritten that it may as well not even be there. It would have been a better use of time to write in story content for the entire game, instead, the game’s main draw comes off as shallow and unfinished.

On the up side, there are also eight assistant characters available (four heroes and four villains – Att-Las, Giant Man, Iron Man, Ronan, Sentry, Mighty Thor, Ultimus, and Vision) – who can be called out to provide an extra attack or two throughout the fight. SNK and Capcom made extensive use of the same concept in 1998 and 1999 with Marvel vs. Capcom: Clash of Super Heroes and The King of Fighters ’99. Unfortunately, like in Marvel vs. Capcom, some of the characters that can be chosen as temporary assistants are much cooler than the ones we get to actually play as! Amusingly, with the popularity of Marvel’s live action films today, several of the characters and designs appearing in the game will seem more relevant now than they were in 1995, even though it is a little weird to have popular character like Iron Man relegated to the sidelines. Otherwise, what other one-on-one fighter has Thor, Captain America, Ronan the Accuser, Vision, and Giant Man in the same game? 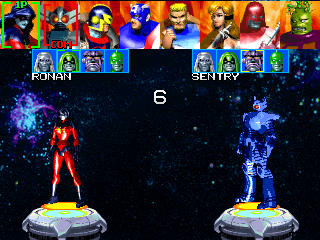 Avengers in Galactic Storm was one of the few games released for Data East’s MLC (Mother Less Cassette) arcade system, that was meant to be a competitor to SNK’s Neo Geo MVS. As with that system, the arcade owner would buy a single board and then swap out games with different cartridges. Only four games were produced for the MLC before Data East left the arcade market. The others were Skull Fang, Dunk Dream ‘95, and Stadium Hero ‘96.

Capcom’s X-Men vs. Street Fighter was released the following year in 1996. They continued to develop Marvel-themed games, including Marvel Super Heroes vs. Street Fighter, and then eventually the three Marvel vs. Capcom games. All of these games are substantially better than Galactic Storm.