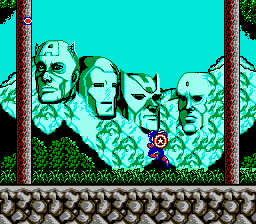 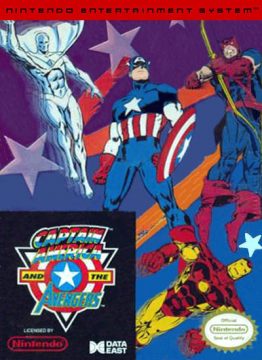 Captain America and the Avengers also appeared on the NES in late 1991. Unfortunately, it’s a completely different game compared to the Data East arcade game. The premise is that Iron Man and Vision have been kidnapped, so Captain America and Hawkeye must set out on a quest across the US to find them while fighting the Mandarin and a few of his cronies along the way. Hawkeye and Captain America busting up evil cyborgs and mercenaries while on a transcontinental road trip sounds like a great premise for a game, but unfortunately that potential vanishes as soon as players press Start. Instead of the fast brawling action seen in the arcades, on the NES players are presented with a tedious side scrolling action game. Both Captain America and Hawkeye have a pretty good arsenal of moves and techniques, but the game’s levels rarely require one to use them to the best of their ability. Partially because each level has to be potentially navigated by either one (it’s just a one player game now) with equal effectiveness, and partially because the enemies and bosses are uninteresting to battle. 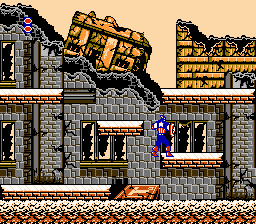 Our two heroes also start out quite weak, and have to increase their power by collecting shards of the Power Crystals (maybe Data East meant to say Infinity Gems?) scattered throughout each level. “Scattered” may not be the right word, though. Throughout each city there are some capsules floating around. Punching one of these will make it spit out a helpful item. The main way for characters to increase their score and abilities is to walk up to one of these and stand around punching it for a long time. Be patient, one has to collect 200 crystals before any improvement is seen in either hero’s attacks. After that, completing the level requires tracking down a Key Crystal to unlock the level’s exit. That special crystal is also found by punching a capsule, so have fun backtracking through each level to find the right one to beat up.

While the game has many story scenes of Wasp instructing players on what to do next, the personality and goofiness of the arcade game is completely missing. While the arcade game is bursting with personality, here the intermissions consist of Wasp just repeating to the player how, “If you complete the city stage where Hawkeye is you’ll get to switch place [sic] with him”. Our heroes rarely have anything to say other than a, “Roger, Wasp.” 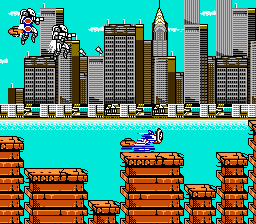 The music is pretty good, and is the work of Seiji Momoi and Takafumi Miura. The soundtrack isn’t as memorable as Miura’s work on other Data East games like Bloody Wolf and Werewolf: The Last Warrior, but is still easily the best thing about the game.

Unfortunately, a decent soundtrack isn’t enough to save things. There are parts of a great game here, but the tedious combination of maze-like levels and uninteresting enemies make it boring to play. The NES version wasn’t even released in Japan, which, in addition to being a late release, speaks to its quality.