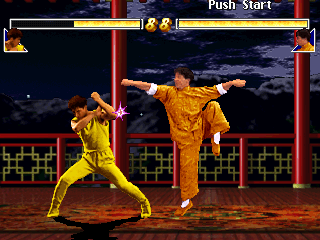 Probably the most curious game in Jackie’s video game history is Kaneko’s arcade game from 1995. Very little is known about this title and it never traveled very far in this world, as it has become one of the rarest arcade cabinets in existence. For many years this game was unplayable on emulation because even though it was such an unknown title, the board featured some of the hardest protection measures for coders to crack. Even though the rom was dumped in 2000, it wasn’t until 2008 that gamers could experience it for themselves through emulation.

Founded by Hiroshi Kaneko in the early 80s, Kaneko started out as a developer under Taito since 1982, until they decided to move out on their own in 1990. By the time production began on this Jackie Chan game, Kaneko had previously produced titles such as DJ Boy and Gals Panic, and was seen as somewhat of a small time company. They also faced criticism over their racial insensitivity in DJ Boy and for the softcore nature of Gals Panic.

Chan started production on his newest movie Thunderbolt in late 1994, and it was decided by Golden Harvest to film on location in Japan for many of the racing scenes and fight scenes. The movie features Jackie as a racer named Chan Foh To who helps the police arrest a criminal racer named Cougar, played by Thorsten Nickel. When Cougar breaks free from jail, he kidnaps Chan’s sisters and the only way he can save them is to partake in a race. No one watches these movies for the stories, anyway.

As the movie crew rolled into Japan, they were looking for sponsors to fund the movie. Jackie’s longtime partner and sponsor Mitsubishi was already onboard, but with rental of race tracks and other expenses of filming overseas. Thunderbolt also ran into problems with the Japanese weather, making a lot of the racing scenes hard to shoot because of heavy rain, and parts of it had to be filmed in Malaysia. As Golden Harvest was looking for sponsors, they found one in Kaneko. When Kaneko agreed to sponsor the film, they also inked a deal to produce a video game based on Jackie Chan. The result was The Kung-Fu Master Jackie Chan.

The game is a one-on-one 2D fighter using digitized sprites similar to Mortal Kombat and Street Fighter The Movie, which both had been released by this time. Because of the relationship and timing between the filming in Japan and signing the deal, Kaneko opted to use many of the cast members of Thunderbolt as playable characters, and traveled to Hong Kong to shoot the material with the help from Frankie Chan and the JC Stunt Team. Let’s take a look at the roster:

A standard karate fighter in a yellow tracksuit. The actor is sometimes credited as Andy Lau Tak-wah, but this is incorrect. He can briefly be seen in Thunderbolt as a stuntman.

A Boujutsu (Japanese staff technique) fighter. Yeung Ching Ching can be seen in many Shaw Brothers movies like Clan of the White Lotus, 8 Diagram Pole Fighter and Treasure Hunters.

A wild kung-fu fighter and rival of Lau. The actor Sam Wong was the former head of JC Stunt Team, and can be seen in Thunderbolt, Shanghai Grand and Police Story 3.

A German kickboxer. He stands taller than all other fighters in the game. Thorsten Nickel was a model in Hong Kong and landed a role as the main bad guy in Thunderbolt, which lead to him being cast in this game. Today he is a preacher.

The second lady of the game. She uses a mix of martial arts and lucha libre wrestling. Kim-Maree Penn is an Australian actress and martial artist who moved to Hong Kong and appeared in a few movies like Police Story 3. Today she runs a celebrity security agency called Signal 8.

A lion dancer. Lion dance is an ancient ritual in Chinese culture and was practised by martial arts students. The lion dance style featured in this game is a Northern Lion. Chinese martial arts is seperated into 2 groups, the Northern Leg and Southern Fist.

Probably the style Jackie Chan is most well known for. The Drunken Fist style was featured in his blockbuster movies Drunken MasterDrunken Master 2. In real life, this style is based on imitating the movements of a staggering drunk. However in this game like in other fiction Jackie can be seen drinking after each round.

Based on the animals Dragon, Snake, Tiger, Leopard, and Crane. Based on the southern style of Chinese martial arts, this uses mostly hand techniques to strike down the enemy. Jackie can be seen using the animal styles in many of his earliest films, like Snake in The Eagle’s Shadow.

The outfit Jackie is wearing is the ceremonial suit from Project A. Bagua Zhang is a style that uses open palms to strike, and movement is done around your opponent, as opposed to advancing straight forward, but because this game is on a 2D plane, this is not demonstrated. You can see Jet Li use this style in The One. 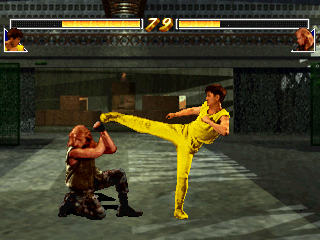 As you start the game, Jackie will greet you cheerfully and tell you “I’m Jackie Chan, this is my game!” There’s some short video clips of him doing different poses and some drunken master goodness. It actually looks pretty good, and Kaneko were smart to film Jackie doing some vintage material to lure fans in. The sprites are large and fairly well detailed too, and the animation, while not as smooth as it could be, has some nice impact to it. The visual effects and speed makes some of the moves look really powerful and effective and the special moves are pulled off nicely for the most part, as opposed to the ones seen in Street Fighter The Movie. The backgrounds on the stages are largely forgettable however, being the standard stuff like warehouses, shaolin temples and street corners. The characters blend in well with their surroundings though, so at least they work for what they are.

You’ll quickly be surprised by one of the main features of this game, the blood. There’s tons of it. So much in fact that it sometimes floods the floor. If one looks at the other aspects of this game like the digitized characters or the history of the developer, it might not seem like this would be a surprise. But this is a Jackie Chan game and Jackie is notorious for keeping his own image clean and protected. In his movies he is always a hero, someone kids can look up to and respect, and very little sex and gore is allowed. As Chan signed on to this game he took the position as producer and consultant, it’s hard to imagine him allowing to put his name on a product where characters have their throats slashed. It becomes clear very soon that Kaneko must have thought of this earlier.

When you face Jackie, the game no longer features any blood nor fatalities. The moves and fighting remains the same, but even as Jackie is beaten he will rise onto his knees and congratulate you and praise your fighting, whereas earlier your opponent would be groggy and give you time to prepare your eventual beheading of them. One theory on how this could have happened seeing Chan’s concerns on violence is that in the contract it only stated that Chan himself is not to be featured in scenes with blood and gore, and so Kaneko not being strangers to a dose of controversy, made it so that the game would not display blood only when Chan appears, but resorts to being gruesome to make sure it captures the attention of the arcade going public, which by now had seen fighting games come and go on a daily basis. Sadly for Kaneko, it didn’t work out for them either, and the game faded to obscurity like the rest of them. 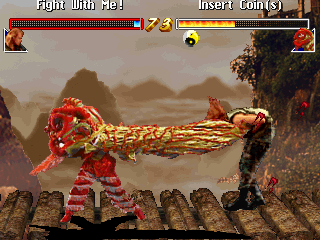 The fatalities are probably the worst part of this game. Like Mortal Kombat this game lets you set up a deadly final blow after defeating your opponent. This is done similarly to Tattoo Assassins, where anything you do be it a punch or a special move will trigger a fatality. If you throw your opponent they will bounce around the screen like Popeye just socked them and when you do a hard kick, they will fly into the screen, breaking it in the process. It’s all very cheesy and cheaply done, and you see almost immediately that it seems very last minute and out of place. This same fatality system was used by Kaneko in another arcade game they put out titled Blood Warrior, which also utilized digital actors.

But even with the shady workaround, we are left with a remarkably good game. The controls uses a 4 button system which is very responsive and feels very fluent, the special moves are pulled off using the standard Street Fighter 2motions gamers are used to and as mentioned the impact is very well done. Another key point is that none of the fighters really feel the same and use a very well designed set of moves that make them feel different from each other, like Yeung using the staff or Mysterious Lion using his lion dance. The music is pretty catchy too, using a lot of Chinese percussion and Chop Suey China style music. It was composed by Tetsuya Watanabe, who also composed the music for Kaneko’s Shogun Warriors. While most companies who resorted to the tired Mortal Kombat template of gore and brutality, Kaneko actually put a great deal of work into this game to balance it out and actually assure that there is some value in playing it, and they also make very good use of Jackie himself creating 3 different versions of him based on fan favorite characters of his movie past. Too bad he’s an absolute a-hole throughout the game though. As you fight him, you’ll lose and lose and lose and lose, and after each fight he’ll laugh his ass off and mock you while speaking Engrish.

In single player you go through 9 stages. Every third fight you encounter, you’re allowed to fight Jackie himself. The first form you face is the Five Animal Style form, and as you enter the fight the game plays a small video clip introducing the stage. During these fights no blood whatsoever is shown, and only Jackie can do “fatalities,” though all of them are lighthearted and non-violent, like transforming you into a chained dog that goes to sleep or shrink you down to pea size. As you progress through the game you’ll eventually fight him with the Drunken Fist style and finally the Bagua Zhang style. Once they’re beaten you have finished the game, but don’t expect any fireworks. While you do get these short animations of Jackie punching the screen each time you beat him, you get nothing spectacular for actually completing the game. First a picture of Jackie with 2 shadowy figures in the background shows up with the text “To Be Continued” displayed and then you see your fighter in his victory stance with a message to the player:

You have defeated Jackie Chan! You get a special prize. Please Ask Manager!

No one really knows what this special prize was, and it’s doubtful Kaneko ever gave out such a prize given the obscurity of the game. Most likely it was free movie tickets to the latest Jackie Chan movie playing in theaters, which would have been Thunderbolt.

This game marked the last time until 2008’s Forbidden Kingdom that Jackie performed his Drunken Fist style and it’s also the last time ever he donned the Project A uniform. 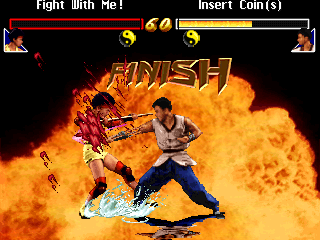 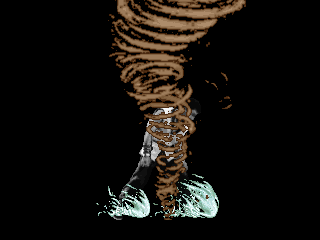 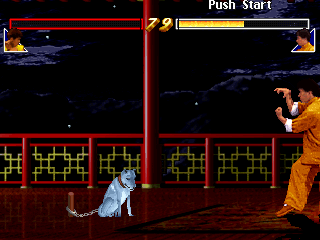 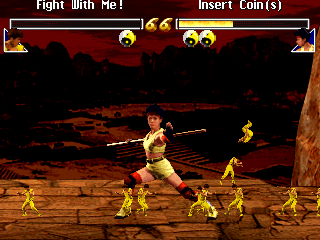 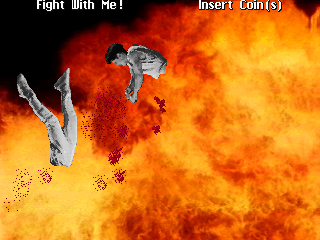 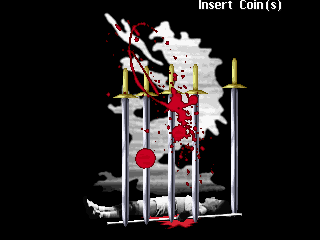