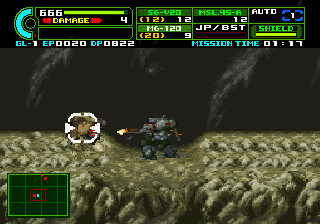 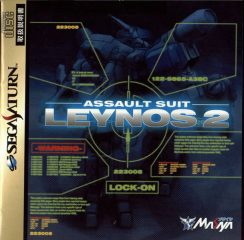 Assault Suit Leynos 2, released for the Saturn in 1997, combines the basic gameplay and level structure of the first Leynos with some of the basics from Valken. Many of the stages are simply straightforward outdoor or outer space missions, where the goal is to kill everything in sight, and occasionally protect another vehicle. Each of the Saturn’s six face buttons is customizable to any function, including weaponry, shields, and jumping/rocket boosting, allowing for a huge arsenal at any given time. Strangely, to use other weapons, you need to press the corresponding button first to enable it, then press it again to fire. The R trigger is also used to dash.

By default, your suit will automatically aim towards the nearest foe, which doesn’t really work well when you’re trying to fight multiple opponents. You can switch to Manual mode if you’d like, allowing either free or locked direction aiming. Although neither of these work quite as well as the controls in Valken. The visuals put the Saturn’s 2D prowess to use, with well animated assault suits with rotating limbs, as well as a camera that zooms in and out depending on your weapon choice. It’s remarkably impressive in the first stage when the viewpoint pulls out to focus on a huge battleship several times the size of your mecha, but the rest of the game is a bit visually sparse.

The suit customization element has really been ramped up. There are nearly a dozen different Assault Suits, each with various capabilities, although they’re not remotely as unique as the types you can find in Metal Warriors. Much like the first Leynos, you’re graded at the end of each mission, which unlocks new weapons. This time, you can also get other expansions, and can tweak your power distribution to affect mobility, strength, and shield regeneration.

The game isn’t nearly as hard as the first Leynos, but it still has plenty of hair pulling moments. The fourth level consists of an escort mission where you need to protect a convoy of trucks which have an unfortunate tendency to blow up without any clear reason. (There are actually landmines dropped by the attacking ships, but they’re impossible to see on the ground.) If it takes too many hits, you have to start the whole tedious mission from scratch. The next stage takes you to outer space, for a long, rather easy stage where you just spend several minutes blowing up enemies, before being confronted with a huge mecha that can take you out in two easy hits. And until you find yourself getting really good at the game, you’ll probably end up failing to earn any points after each mission, resulting in limited power-ups, so you’re underarmed by the end of the game. There are only seven fairly brief stages in total, and the game saves after every level but given the rather erratic difficulty, those will probably last for at least a few hours. Overall, it’s an okay game, but its customization elements don’t help make up for its sloppier aspects.