Yoshiyuki Tomino’s Mobile Suit Gundam, a series of series about a bunch of large robots trashing each other amidst lectures about the horrors of war, is one of Japan’s most phenomenally successful anime in existence, to put it lightly. Since its original broadcast in 1979, there have been dozens upon dozens of video games based on it. Yet, upon examining the Famicom library, we see… well, one fairly decent 3D-ish shooter called Hot Scramble and a whole torrent of SD Gundam strategy and/or RPG games. The Famicom was known for its huge amount of side-scrolling action games, so where the heck were the Gundam games? Although the true history is lost amidst the hidden secrets of Japanese video game companies, NCS/Masaya’s Assault Suits series probably started because some mecha otaku were furious at these developments (or, at least, corporate business folk seeing a gap in the market), and made their own Gundam game, just without the Gundam name. 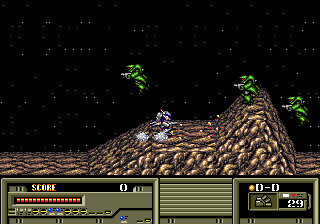 The Assault Suits series is largely characterized by controlling gigantic mechs, although they’re characterized on screen as about the same size as any other side-scroller. Despite their apparent bulkiness, most games give the ability to dash and fire in any direction, in addition to wielding several types of munitions, giving it a significantly different feel than similar action titles. They’re also relatively plot heavy, with constant input from a dispatcher interjecting comments between levels and during gameplay. All of them are also known for their rather brutal difficulty.

There are actually two subseries that consist of the Assault Suits franchise, which is doubly confusing due to the different names during localization. The first game is Assault Suits Leynos for the Mega Drive, which was localized as Target Earth. The second is Assault Suits Valken for the Super Famicom, which became Cybernator outside of Japan. From there springs Assault Suit Leynos 2 for the Saturn and Assault Suits Valken 2 for the Playstation, neither of which were localized. All four games obviously focus on mechs and take place in the same universe, although there are significant differences between each title. This is particularly true for Assault Suits Valken 2, which ditches the sidescrolling action for turn-based strategy. There are also a few other games which are tangentially related – Square’s Front Mission: Gun Hazard, which shares the same director and many of the same ideas; and Konami/Lucasarts’ Metal Warriors, which may as well be an unofficial sequel to Cybernator, even though it technically has no affiliation. 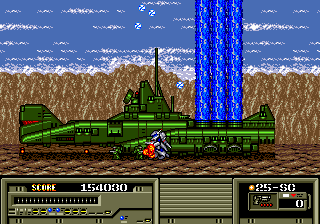 The story first tells of a space exploration squadron which disappeared into the darkest regions of outer space. Earth, in the midst of a fourth World War, was unable to send the resources to help them. The battle was eventually resolved ten years later, but no one had heard from the lost crew since. The story focuses on a new recruit in the Assault Suits revision named Rex, stationed on Ganymede, the moon of Jupiter, which has come under assault by a mysterious enemy calling themselves the Chron. Of course, these end up being the exploration crew, embittered that they were forgotten, and have returned with a vengeance. The game starts on Ganymede, but then moves to levels that take place in outer space, and other outposts throughout the galaxy.

Rex and his buddies fighting in twelve foot tall Assault Suits, which can arm itself with up to six pieces of equipment. You start off with a standard machine gun (the only weapon to have unlimited ammo), but you also get a spread gun and a unique weapon that seems to fire chaff. Depending on your performance in that stage, including how well you performed on unique bonus objectives, you can unlock addition equipment. Additional weapons include grenade launchers, missiles, and lasers, but there are also other types of items, including a shield, which can half the damage done from the front; the B-Pack, a jetpack which lets you hover in mid-air for a few seconds; and additional plates of armor, which extend your life bar. There are fourteen weapons in total, not including the extra pieces of equipment. 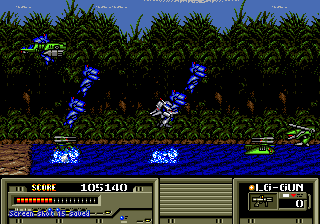 Most of the missions have goals beyond simply reaching the end. In the first stage, once you reach a certain point, you need to destroy a huge battleship before it reaches your home base. In the third stage, you need to protect your battleship while bouncing around in zero gravity, and make it back in time before it takes off without you. At the end of each level, you’re graded on your performance, which in turn will grant you new weapons. In some levels, you’re accompanied by some NPC helpers, giving the impression that at least you’re not the only soldier on the battlefield like so many other video games, but they also tend to get killed pretty quickly. Indeed, even though some missions involve protecting your battle cruisers, at least they can also attack themselves.

It takes a good while to get used to the controls. You can’t jump when walking over bumpy terrain, which is pretty much everywhere, so you’ll often find yourself stumbling right into enemy fire. Your mecha can technically shoot almost in any direction, but your gun reacts slowly and it takes a second or so to get your aim straight. The standard machine gun is incredibly underpowered, as even basic enemies take a few hits to destroy, and it even pauses to reload after a few moments of constant fire. The upside is that you have a shield that can regenerate itself if you can avoid damage. The downside is that it regenerates very slowly. There’s also no real invincibility period after getting damaged, so if you sustain a constant barrage of enemy fire, even if you survive, it can effectively spell your doom because it’s incredibly difficult to recover from such an assault. 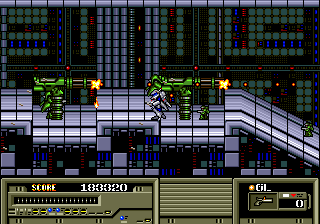 The enemies are fast and relentless, constantly swarming you from all sides and littering the screen with projectiles. The first two stages aren’t very difficult, but once the third level hits, you really need to become a master at not only mastering the use of your extra weapons but also the art of running away until you’re in a good enough shape to fight again. You can continue a few times, but unless you become an expert, it’s hardly enough to make it through the game’s eight levels. It’s such a remarkably difficult game that it’s hard to really enjoy it without turning on the invincibility code, which was added to the North American release. (Just hit Start on controller 2 during play.)

The graphics are pretty average for an early Genesis game. For being twelve foot-tell, the mechas in this game are awfully small, and nothing really feels to scale, especially the battleships. There’s some decent FM hard rock music, but the otherwise the sound is pretty annoying and repetitive.

At the time of its release, Target Earth was regarded as something of an ambitious flop. It does have some great ideas, particularly in the mission design (if not the level design, which is fairly plain) as well as the wide arsenal. The story is kinda interesting too – the game also creates a villain by the name of Rance Culzas, who fights the hero a few times throughout wearing a distinct blue Assault Suit. However, the awkward controls and high level of difficulty gave it something of a bad reputation. Still, over time it began to become appreciated in spite of its difficulty level, especially since the title effectively created the “side-scrolling mecha action” subgenre that continued through the 16-bit era, both by the developers of this title and by others. 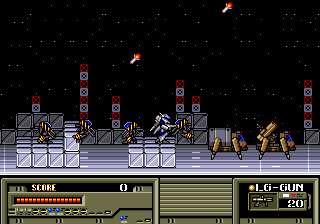 There were some subtle but noticeable changes to the North American story due to the localization. For starters, the hero is also unnamed in the Japanese version. The blue haired operator, Sergeant Lena, shares more lines of dialogue with the hero in the Japanese version, which implies a romance. This explains her presence in the game’s ending, which otherwise seems out of nowhere in the English version. Other aspects seem to be simple translation mistakes – the exploration crew returned after only ten years, not a one hundred. The “Chron” name and technology they refer to, that keep themselves alive, are supposed to be “clones” that the crew created to supplement their army. But still, the gist of it, that the forgotten squadron became part-man, part-machine, and attacked Earth due to feeling abandoned, is still kept.

A small scene was removed from the North American release. The third level takes place in orbit above the Earth – once you beat it, you see one of your more unfortunate comrades end up getting left behind and burnt by the atmosphere. Strange that they’d remove it, since during the course of the level, if you yourself fly too close to it, you’ll get fried as well. 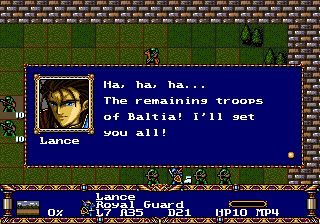 Though not nearly as popular nor as prolific as big hitters like Konami or Capcom, Masaya’s most popular series, other than Assault Suits, were Langrisser and Cho Aniki. Much like how Cho Aniki‘s musclemen appeared in Langrisser, Assault Suits is tied to its medieval strategy cousin by the way of a single villain – Lance Kalzas, as his name is localized as in Warsong (AKA Langrisser I) or Rance Culzas, as he’s known in Target Earth. It’s cool to see crossover characters like this, even if they stick him in entirely different time periods. Lance also appears as a villain in Assault Suits Valken 2.

Thanks to Ganelon for highlighting the Langrisser / Assault Suits connection, and Hazumu for the pic.