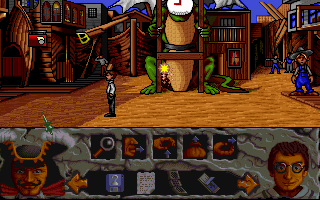 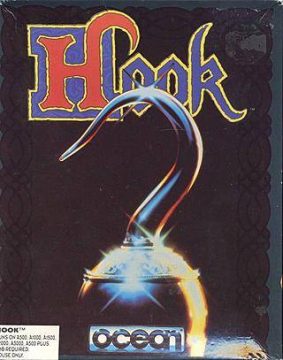 Steven Spielburg’s 1991 movie Hook told the story of a grown-up Peter Pan, who had left behind Neverland for the world of a adulthood, only to be dragged back to save his kids. Of all the numerous video game adaptations, the console versions are typical side-scrolling platformers, while the arcade game is, bizarrely enough, a Final Fight-style beat-em-up. The computer version, published by Ocean, is a point-and-click adventure game. This was probably done to capitalize on the popularity of Monkey Island, although it doesn’t have even a minuscule fraction of that game’s charm.

The graphics are excellent at least, although clearly the developers didn’t have the license to use Robin Williams’ likeness so Peter looks like a standard weenie, and the music is decent too, at least in the Amiga version. It’s also amusing to see the image of Captain Hook in the interface bar shake his hand…err, hook, whenever you solve a puzzle. The quest is remarkably short though, as the whole game can probably be beaten in less than an hour. Nearly half the game consists of obtaining the proper pirate attire (including a painful sequence where you need to visit the dentist to get a gold molar pulled in order to barter for something else). The rest consists of a brief jaunt through a maze-like jungle before entering the Lost Boys hideout, and then you’re confronted with Captain Hook before you know it. It’s not terrible, but for a game based on a movie about rediscovering the wonders of childhood, the Hook game totally misses the point and ends up as yet another run-of-the-mill product.