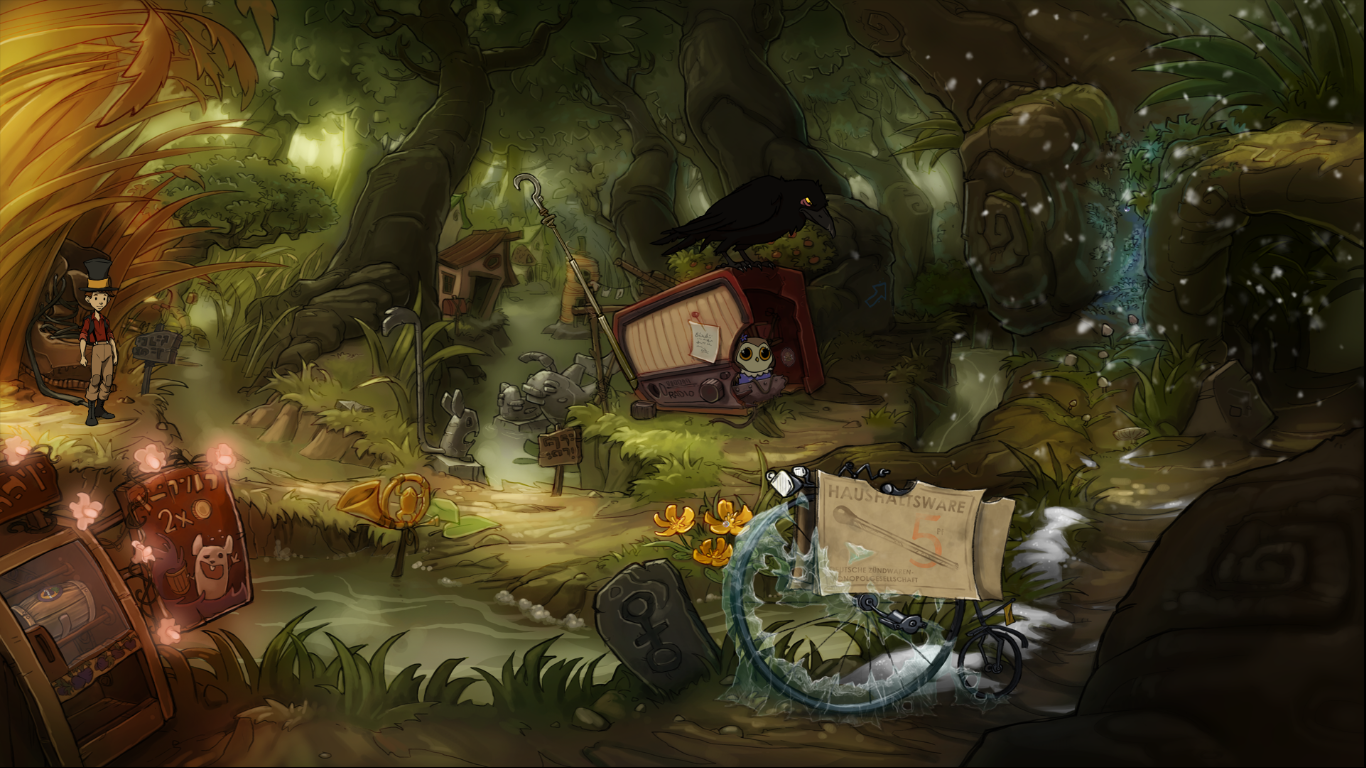 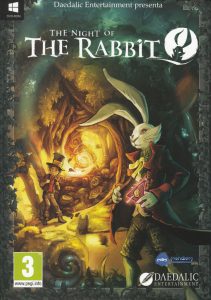 An ongoing theme among Daedalic’s work are games about stories. The Dark Eye: Memoria, The Whispered World and its sequel Silence, Deponia Doomsday, and A New Beginning all have main themes and secondary themes based around the power of stories, showing us how fiction can shape us and how we view the world. Daedalic is also notable as a company for releasing so many literary inspired games, including Ken Follett’s The Pillars of Earth and The Franz Kafka Videogame. However, all of these games deal with stories aimed at older audiences, absurdist themes, or try to impart mood or feelings through their prose. Their one major exception is 2013’s The Night of the Rabbit, which aims to tell a story about children in a way that children can comprehend and follow, though with an unexpected heft of maturity and emotional weight. 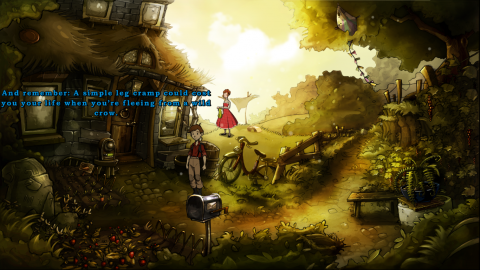 The game starts in a mysterious, misty void, where a rabbit talks to a woodsprite about finding the “beginning of their story.” Once they find it and disappear through a portal, we switch perspectives to Jeremiah Hazelnut, or simply Jerry as he goes by. He’s a kid with two days left of Summer vacation, planning to make the most of it with a grand adventure. Said adventure comes knocking as he finds a mysterious letter that instructs him how to cast a spell, summoning the rabbit from before and introduced as the Marquis de Hoto. He reveals himself as a great magician and treewalker, a type of magic user who can walk from world to world with so-called portal trees, and he offers to make Jerry his apprentice. Jerry agrees, and he’s taken to the world of Mousewood for his training, a land where woodland critters have made their own tiny society. However, it quickly becomes apparent things aren’t quite right, as the Marquis de Hoto starts to realize he’s been gone longer than he thought, and he keeps mentioning something about “four nails” and the “first tree.” Jerry’s big magical adventure ends up being far bigger than he could have ever imagined, with the entire multiverse at stake…

The Night of the Rabbit carries along a lot of familiar Daedalic bits, including environmentalist themes and normal people being trapped in harsh situations being put forth by conflicts far out of their understanding, but it tells it all like a charming child’s story. It’s not so much a fairy tale as an exploration of children’s fantasy literature, having some prose and beats similar to the more comedic bits of The Hobbit, or just an exploration of a day in the life of Winnie the Pooh. The darker elements of the plot all come from the world of adults and modern civilization, urban development treated like a wave of gray sucking all life out of the forest, or bitter people unable to let go of their past pain. Jerry himself makes for a great lead, wide eyed and hopeful, but still reacts to these grim realities as a child might. When things become more serious, the game carefully jogs into the proper tone, making the dark subject matter digestible, and making the victories Jerry and friends gain more powerful. If the game has a point to make, it’s that we need to remember our inner child and never give up our hope or optimism, and it makes its case well. It also definitely believes highly in art, from stories to music, showing how they can move people to acting and lead others to action in the process. 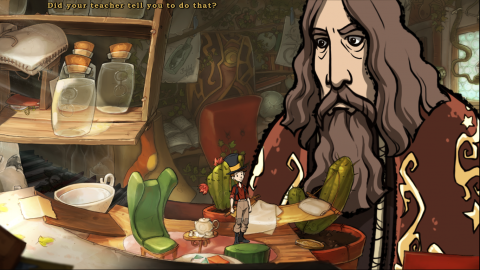 This might also be one of the best looking 2D games in Daedalic’s library with a cartoony theme. Where Randal’s Monday and Deponia had issues with character design, copying adult animation norms in look, The Night of the Rabbit instead emulates old European comics and illustrations from British children’s lit. Everything portrayed is old-timey, like Plato’s bike with the one giant wheel, or the radio at Jerry’s house. This results in a cute take on the urban fantasy genre, like having a forest wizard wearing flip flops and socks while decked out in fancy cloths. There’s still variety in the other worlds you visit as well, including a stop in a fantasy old Japan where you talk with fox spirits. Every background is masterfully rendered and detailed, and every character looks instantly distinct, their personality perfectly reflected in their outfits and posture. The music matches along great, with lots of somber sounds and some moving instrumental bits here and there, especially the main theme rendition used in the climax. The rustic, charming feeling even goes into some extra content, like eight unlockable short story audio books about the various denizens of Mousewood.

As far as the point and click stuff goes, it uses the familiar simplified formula of modern Daedalic releases, along with the ability to examine items in your inventory. The new addition for puzzles is a spell system, not unlike The Dark Eye: Chains of Satinav or Memoria, though their mundane uses have been replaced with more fantastic effects, like super growing plants or changing your appearance. The only downside is you don’t really get to play around with these spells for awhile, as a long stretch of the game is getting a festival ready for Mousewood before your training begins proper. As for the puzzles themselves, as long as you pay close attention to what everyone says, you can piece together what’s needed to do fairly easily. The Daedalic mechanic of seeing all clickable objects on screen also has a new twist this game, as you can also reveal things hidden from normal view this way, easily the most important mechanic overall. The only other addition is a card game, but it’s entirely optional doesn’t add much overall. 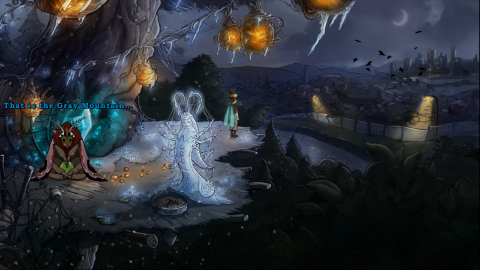 All in all, The Night of the Rabbit is a refreshingly sincere change of pace for Daedalic, capturing a real sense of childhood usually absent from their works. It’s witty, adorable, and quite introspective in all the right paces, with some lovingly drawn art making its narrative substance really pop. The game ends with two possible sequel hooks, and both would make for fine continuations. Hopefully this is not the last we’ve seen of the treewalkers.