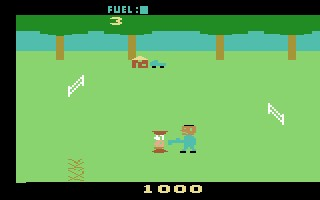 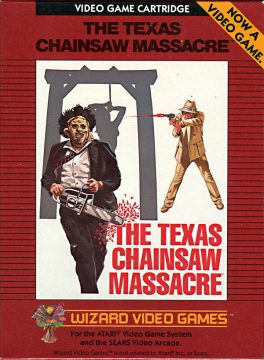 As long as there have been media, people have been outraged. Censorship! Book burnings! So goes the course of human civilization. Video games were of course not spared the righteous indignation of others, even from the outset, despite graphics so abstract that it’s hard to imagine much of what’s supposed to be going on. The Texas Chainsaw Massacre for the Atari 2600, based on the classic horror movie of the same name, was one of the earlier ones. Released by Wizard Video Games, one of the first companies to market games specifically for adults, The Texas Chainsaw Massacre is one of few games on the platform that managed to ruffle any feathers. The presentation has not aged well though, so it looks more like a joke today.

The gameplay is strange, to say the least, as it puts you in the shoes of Leatherface, the infamous villain who made a name for himself by chopping up people with his chainsaw and wearing a mask made of his victim’s skin. This in itself is rather unique, as most other games with horror elements cast the players as the victims. In the game, you chase victims, which are all girls in yellow or purple dresses, and hack them to bits before they can run away. There are obstacles in the way, such as wheel chairs, fences, and cow skulls. (It does take place in Texas, where they apparently lying all over the place.) You can use the chainsaw to slice through obstacles, but there is a catch – your chainsaw has limited fuel, and if you run out, you lose a life. There is no way to get extra lives, so after you’ve exhausted supply, it’s the end of the game.

You can conserve fuel by going around obstacles, as slicing through them costs chainsaw fuel. It’s hard to get victims the first time because sometimes they disappear and spawn right behind you when you are chasing them down. Victims are not dead until they turn upside down, shift to a brown palette and disappear, vaguely like a goldfish, which is a bit silly. Every five victims killed restores a little fuel in your chainsaw and every ten victims killed will make Leatherface move a little faster. Running out of fuel is inevitable, so you can not actually “complete” The Texas Chainsaw Massacre. You just play to try to get a good score, or for a quick laugh, because it can be hard to take this game seriously now. When the game ends, you see a funny little scene where Leatherface runs out of fuel and a victim finally fights back by literally kicking him in the butt.

The graphics are pretty average for a game released in 1983. The sprites have roughly two to three frames of animation and the graphics are relatively colorful given the dark theme. The sound however, is terrible. Loud screeching noises are frequently heard, which are supposedly the victims screaming when they see Leatherface chasing them with his chainsaw. Special care was taken to emulate the sound a chainsaw makes through the Atari 2600’s sound capabilities. It sounds surprisingly accurate, though very muffled, like you’re listening to a chainsaw through earmuffs.

The Texas Chainsaw Massacre was pretty violent for a game back in 1983. Victims do not actually fight back (save for the silly ending scene), so they are for the most part, defenseless. Like in the movie, Leatherface is a nearly unstoppable psychopath that can destroy anything in his way. The violence is not actually all that bad, though. Even though you play as a serial killer, there is no blood, no gore, and no dead bodies lying around after they’re dead.

Wizard Video Games marketed their games with adults in mind. The back of the box sums this up very well; saying “Put aside your childish pastimes; stop eating dots and chasing ghosts! A ripping revving chainsaw is at your command as you wear the leather mask of a madman! Your victims come face to face with a living nightmare as you wield the ultimate weapon – an unrelentless chainsaw! Let your most wicked fantasies run wild! Know the total pleasures of destruction as you pursue your victims with the razor sharp teeth of a hungry chainsaw! The story is true, the movie is chilling, the video game is horrifying!”