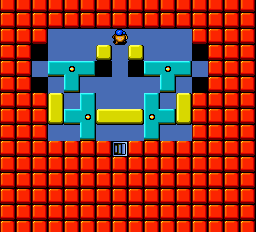 It may be a clichéd phrase, but from the 80s to the mid-90s, anyone could be a protagonist and do anything in a video game, and no one would bat an eye. A yellow sphere could eat dots and run from ghosts, or a fat Italian plumber could run in a carroll-ian landscape and fight turtles. It was a bygone era of protagonists brought about by technical limitations, and one of the franchises to come out at the twilight of this era was none other than the Puzzle Boy series. A series known for its Sokoban-like puzzles and quirky cast of vegetables, it’s an interesting series of games by the developer that would later be known for other block puzzle games such as Catherine.

While Puzzle Boy may seem to just be “Sokoban with vegetables,” it has a few gimmicks that make it more unique. Some of these that have been included throughout the franchise include revolving walls, blocks of different sizes, and various pits that need to be filled with blocks. Unique to various games is the ability to select between multiple vegetables in a single level, and various types of time trial modes. This adds to the overall experience and difficulty, and makes it an enjoyable time-killer.

The first game in the series, with its Totally Radical protagonist localization and painful subtitle of “HE’S A-MAZE-ING,” reeks of that special early 90s charm. Like most of the games in the series, the main game mode uses the standard sokoban formula of “Get from point A to point B, push blocks, overcome obstacles,” but also houses several interesting and unique ideas and mechanics.

Like many games of the time, the story is practically bare-bones. Kwirk and Tammy, who are both tomatoes, decide to explore their city’s subterranean labyrinth below. Tammy suddenly vanishes, and Kwirk, along with several of his vegetable allies, must find Tammy in this labyrinth and bring her back home. In the localization of the game, Acclaim changed the main character from a potato to a tomato. In response, Atlus made Kwirk (eventually known as Spud) look more potato-like in all future installments.

The game offers three modes: “Going Up?”, “Heading Out?”, and Vs. Mode, and each game have levels on three different skill settings. Going Up is the standard sokoban game mode that allows you to restart and end the level you’re on, as well as reset your move up to eight times per level. Scoring is based on the time taken to complete the level and however many moves were taken in the process.

Eventually in Going Up, one or more of Kwirk’s veggie friends will help, which the player can switch between using the select button. While they play basically the same as Kwirk, they work in such a way that the player can solve puzzles that would require more than one person. However, the player must also maneuver them to the end of each level in addition to Kwirk himself. Kwirk’s edible plant pals consist of a carrot, eggplant, pepper, and squash.

Heading Out is basically the time attack mode, having to complete a certain number of rooms consecutively in order to get a high score. There are 99 rooms, of which any can be selected. Bonus points are earned upon completing a room, starting at 2000 and then decreasing during the duration of the room, along with another timer to track how long you took in the room. After running through the complete set of rooms, the player’s score is put on a four-slot leaderboard. Vs. Mode is basically a race version of Heading Out between two players.

Graphics-wise, there isn’t much that’s special. The game has two graphical modes: Diagonal, and Bird’s Eye View. Bird’s Eye renders the characters as just blobs with faces, and offers a more simplified view of the game, which Diagonal view gives the characters legs and more animations, as well as various other perspective features. The game really only has a handful of tracks, and the various sounds can get annoying after a while.

The game was also ported to Famicom Disk System, offering many of the same levels, mechanics, and tunes that were in the Game Boy version. This version also offers the same two views as well, which can be switched through by pressing the start button. Like many other Famicom Disk System games at the time, it also had loads and loads of loading between each screen, which can make playing this version kind of a bore. When playing this version on Bird’s Eye view, your character moves much faster; this is unique to this version of the game and can greatly mess up some of your puzzles.

With the next game in the series, Atlus decide to change the genre from a sokoban-style puzzle game to an Overhead Action-RPG. In the game, the player controls “Spud the Wanderer” as he travels up the Far Tower within the Vegetable Kingdom. His goal is to save Princess Mato from an evil Stag Beetle representing the Devil. It is up to Spud to not only rescue Princess Mato, but also his vegetable friends, who are this time named Arnie Eggplant, Gerrit Carrot, and Terry Turnip. However, other than providing tips, they cannot help him during this adventure.

Spud’s main attack is a short range projectile that usually takes a few hits to kill any enemy. As Spud kills enemies, he gains experience points, and a new level along with a health buff is gained every 100 points. The floors of the tower appear to be randomly generated, as there is really no way of backtracking. Floors could include maze-like areas, various types of enemies, block puzzles reminiscent of the first Puzzle Boy, power-ups in the form of playing card suits, characters such as Pumpkins or Watermelons with useful tips, various cutscenes, or a mixture thereof. Keys can be found to open doors and stairs let Spud get to the next floor.

Overall, the game feels a bit too complex to be enjoyed as a pick-up-and-play puzzle game, but too simple to be enjoyed as other action-adventure games such as The Legend of Zelda and Ys. Enemies tend to respawn way too quickly that it feels like you wasted time trying to kill the previous one. The block puzzles also have the same issue where you can push one of them a bit too far and have to restart the whole puzzle. And with no sense of direction and zero backtracking or any sort of map, the game feels more like an endurance test than an actual “adventure” as described in the title. As with Puzzle Boy before it, the music and sounds are nice at first but wear thin after a while.

Incidentally, Spud’s Adventure is one of the rarest, most expensive titles for the Game Boy. The game was not popular at all, so it probably just had an extremely low print run.

Within the same year of Spud’s Adventure, Atlus decided to make another game in the Puzzle Boy series for the PC Engine. However, while this does share the same title as the original Game Boy and Famicom Disk System game, it is its own entry entirely. While the graphics are nicer overall, the music still gets repetitive and it misses several unique elements from the original Puzzle Boy, such as switching views and having vegetable friends. And with over a hundred puzzles in the game, it is one of the longest entries in the series.

With so many ports of the original Puzzle Boy, it was only a matter of time before Atlus decided to make a “true” sequel. And Amazing Tater for Game Boy is more of the same “push blocks, flip the rotating walls, and get to the end of the level” action. Similar to the PC Engine Puzzle Boy, this one too lacks having multiple views and vegetable friends. However, it does offer a tutorial mode as well as two story modes, which are “Mega Picnic” (in which Spud is in a race), and “Puzzle Forest” (in which Spud is lost in the woods). Like the games before it, it’s still too easy to screw up your puzzle, and the music still gets repetitive after a while.

Like Spud’s Adventure, Amazing Tater is one of the priciest titles on the original Game Boy. 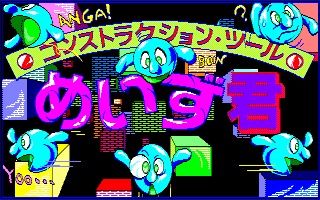 Released within a few months of Puzzle Boy / Quirk on Game Boy, Mazekun shares many similarities with the former game. Rotating walls, push-able blocks, objects that blocks need to be pushed into to go away (this time landmines instead of holes), and even multiple characters to switch between are all found in this game. Rather than going to the vegetable theme of the puzzle boy series, the characters here are represented by simple geometric shapes.

Unlike Puzzle Boy, which only has one song for all of its levels, Mazekun has multiple songs that are selected randomly for each level. Also, the amount of moves you can make is limited. Once the player has made 6000 moves in a level, the game is over. However, players usually won’t pass the 5800 mark. There are 38 levels total (according to this playthrough). However, only nine are selectable in the main game. The levels are also much larger compared to the Game Boy iterations, as the higher resolution of Japanese computers coupled with the smaller sprites allows for more complex levels. 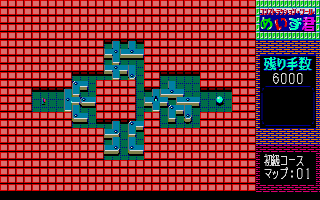 Information about this game is rare, but it is known that Atlus and Nihon Telenet have had a partnership in the past, as the latter company made games in the Megami Tensei series and also made an official Puzzle Boy installment for the PC Engine. The PC-88 version is the only version of this game that is available online in a way that it can be downloaded. Even then, the game is still very rare compared to more popular PC-88 titles. An MSX2 version exists as well, but is only available to Japanese users through EGG, a service much like Good Old Games here that allows users to download old Japanese Computer games with a subscription. Overall, Mazekun is more or less the same as its Game Boy cousins, and one will most likely like Mazekun if they like those games.

The Puzzle Boy series technically ended with Amazing Tater / Puzzle Boy II, but there is a minigame found within the 2004 PlayStation 2 title Shin Megami Tensei Nocturne. The graphics are fully 3D, and rather than playing as a vegetable, you control a Pyro Jack demon. The theme music is a remix of the Kichijoji theme from the original Shin Megami Tensei.

Spud (back during his Kwirk tomato days) also appeared in the short-lived show The Power Team, on a 15-minute cartoon short known as Video Power. The cartoon also had several other Acclaim characters in it from games such as NARC and Arch Rivals. It usually annoyed him whenever anyone calls him a “to-MAH-to” instead of a “to-MAY-to”. Other than that, he was given an annoying voice and the writing was sub-par, but that’s something to be expected with shows like these.

Links:
YouTube Episode of Video Power; Kwirk appears about eight and a half minutes in.