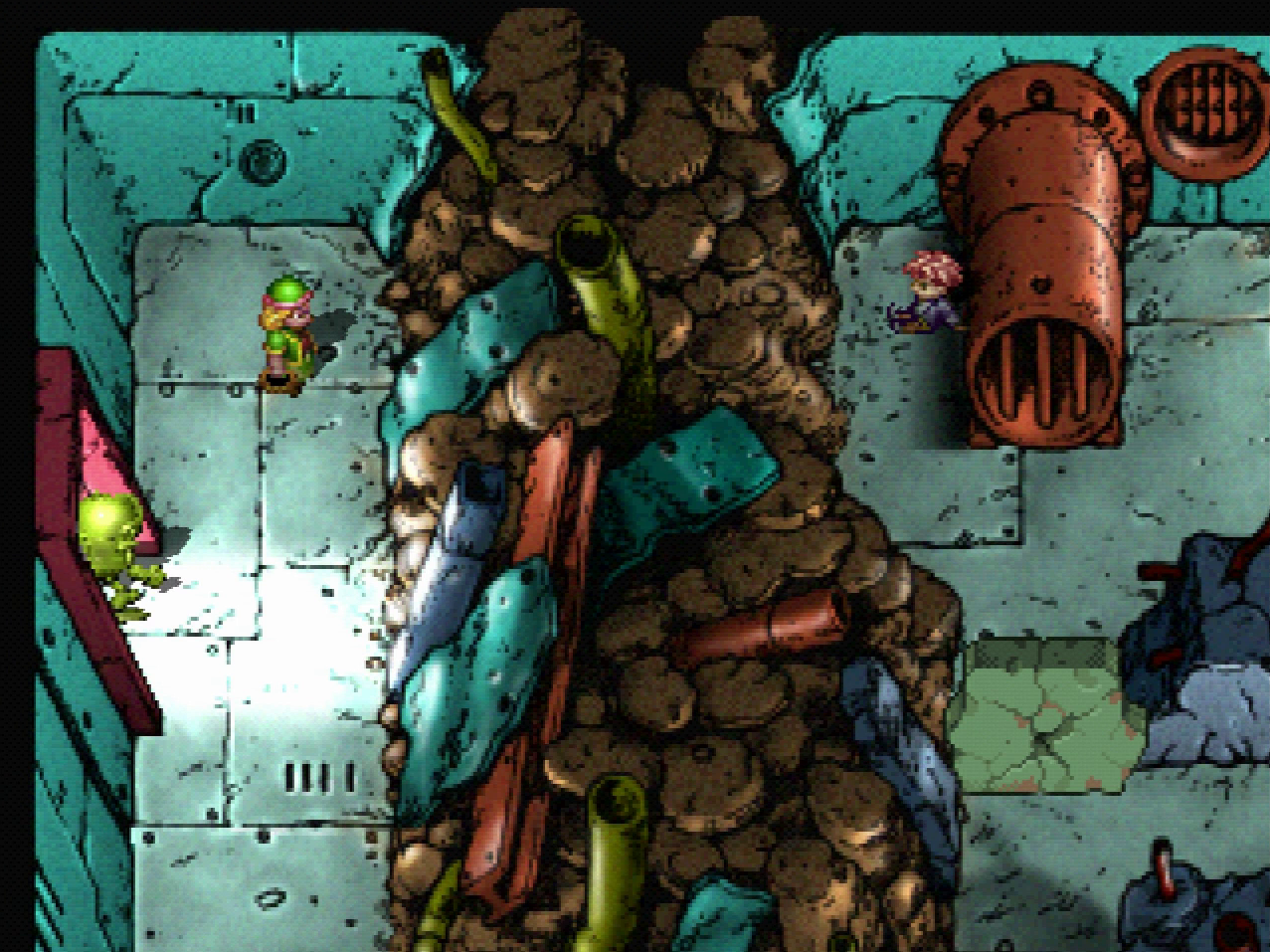 Everyone loves to find hidden gems, and Sega’s consoles have plenty of them. The Dreamcast is a console that’s appreciated more nowadays than it was at the time of its release, so many gamers missed out on its creative library. Elemental Gimmick Gear (or E.G.G.) feels like a title that should have gone down as a cult classic, but was instead lost to time. It was one of the console’s earliest RPGs and also one of its best, and it’s one of the only options available to those looking for a 2D Zelda equivalent on Sega’s last console.

E.G.G. was developed by a company known as Birthday, whose resume consists mostly of unique JRPGs that never made it out of Japan, such as Dream Master and Daikaijuu Monogatari. The game was originally intended to be a Sega Saturn title but was moved to the Dreamcast, likely due to the timing of its release – in 1999, the Saturn was already discontinued in North America and was on the decline in Japan, so it made sense to move it to the Dreamcast where new releases were desperately needed. 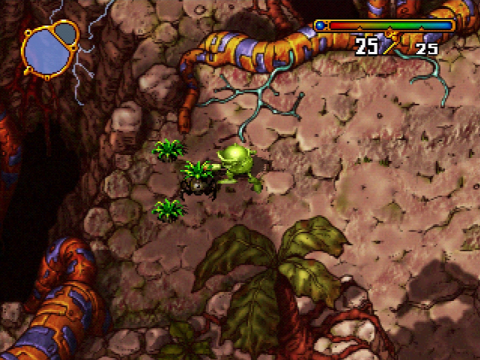 5,100 years prior to the start of the game, scientists stumble upon a strange, egg-shaped machine in a ruin and find a sleeping man (heretofore referred to as “The Sleeper”) inside of it. The machine is analyzed and dubbed the “Elemental Gimmick Gear” and is eventually mass produced for civilian and military purposes alike. 100 years after the discovery of the E.G.G., a group of unknown E.G.G. pilots return to the ruin and accidentally activate an AI slumbering inside of it, triggering a catastrophic event referred to as “The Breeding”. The ruin begins to cover the land in fog, grow enormous tentacles, and produce monsters and machines alike to terrorize the world of Tokion. Due to the constant emission of fog, the ruin is named Fogna by the people of the land. After “The Breeding” occurs, the Sleeper awakens without his memory, but is nonetheless determined to discover the secret of Fogna in hopes of discovering who he truly is.

The story provides an engaging mystery to unravel, though it takes some time to actually get moving. The first half of the game or so is focused on dealing with the local group of pirates who terrorize the town of Eastokion. In a bold move, it’s actually possible to miss out on vital parts of the story – if you don’t treat the leader of the pirates with unearned sympathy after his defeat, you’ll never get to learn his real connection to the story at hand. Discovery in general is a strong theme of the game, with locations such as the enormous Fog Tower and the mythical city of Metal Heaven at the top of it having ulterior reasons for their existence. The mystery of the Sleeper’s past is explored through intermittent flashbacks that do a good job of planting seeds of doubt and misdirection in your mind, but the game’s poor translation and weak supporting cast result in the story not always living up to its potential. 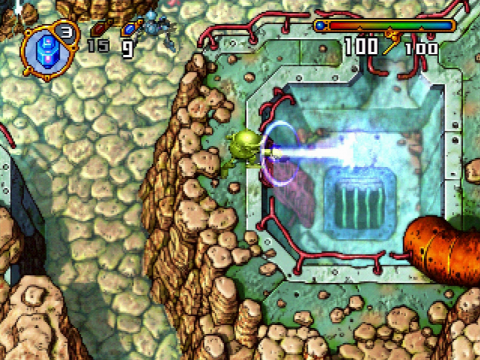 Elemental Gimmick Gear immediately makes a strong impression with its visuals. The game mostly consists of 2D graphics and hand-drawn, pre-rendered backgrounds that look absolutely stunning even today and instill the game with palpable atmosphere. The world of Tokion is simultaneously dystopian and majestic, featuring a combination of nature and technology that continuously inspires curiosity. One screen can look like a desolate wasteland, and the next will be covered in overgrown flora, making the world feel unpredictable and hostile. The towns and structures you visit feel lived in and contain bits of environmental storytelling that warrant careful observation. Many background elements animate individually in noticeable ways and NPCs even have unique idle animations, showing an exceptional level of attention to detail. The game’s main dungeon, Fogna, is a visual standout in particular, with it looking more ominous, destitute, and darker in nature as you delve deeper into it. Another great touch is how the world changes as you progress through the story, with individual background elements changing and new enemies being introduced into the ecosystem as Fogna’s influence strengthens. The game’s 3D visuals utilized during boss battles and full motion videos don’t fare as well due to their dull color palette and lack of detailed texturing, creating a strange contrast similar to what Breath of Fire IV would attempt a year later.

The majority of the game plays out like The Legend of Zelda, with the game utilizing an overhead perspective and emphasizing both exploration and puzzle solving. The flow of the game has you visiting Fogna multiple times as you get new tools from other dungeons scattered around Tokion in order to proceed deeper. Initially, your E.G.G. is equipped only with an extremely short punch attack, a block, and a spin attack that’s powerful and lets you move around quickly but also drains your health, making the early going somewhat rough. Throughout the game, you’ll get access to elemental attacks such as a flame beam that can burn obstacles and an ice beam that can freeze enemies for weighing down switches, along with devastating screen clearing attacks that are a visual treat. Some upgrades are purely for utility as well, such as the ability to pick up and pull blocks or walk through water unhindered. The elemental attacks require resources to use and it’s pretty easy to run out (enemies have a tendency to never drop the type you need), which can result in some very frustrating backtracking when you’re in the middle of a dungeon. 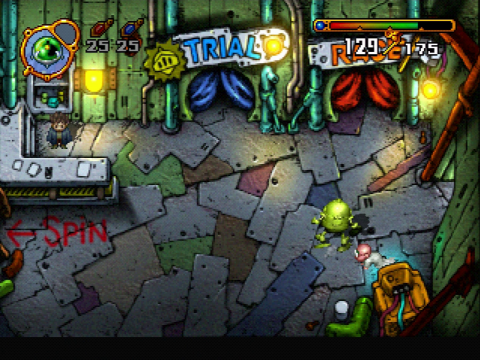 Rather than employing a leveling system, bolstering the stats of your E.G.G. requires you to find capsules that are similar to the heart pieces in The Legend of Zelda. You can improve your attack, defense, and mind (how many element resources you can hold) by finding three capsules of a given type, and maximum health is increased by finding energy tanks, which only require one per boost. These essentials are deviously hidden, oftentimes requiring backtracking with a new tool or taking part in one of the game’s many sidequests. This system is a perfect fit for the game, as the combination of a well- designed, interconnected world and meaningful rewards for putting in the effort works far more effectively than a traditional experience-based system would in reinforcing the game’s themes.

While Elemental Gimmick Gear is somewhat short for a RPG, with the main story only taking around 10-15 hours for an average playthrough, there’s a healthy amount of side content to keep you busy. The residents of Eastokion have new things to say every time you progress in the story and engaging with their oftentimes weird or exhausting demands can be lucrative. For example, you can spar with Luckie, a local E.G.G. pilot, and if you have the patience to defeat him 100 times in a row, he’ll reward you with the game-changing Eco Spinner, which removes the health drain when spinning. Another sidequest has you reuniting a husband and wife for no reward at all beyond the satisfaction of doing the right thing, something that stands out profoundly in the world of video games. Some sidequests even have unexpected benefits; if you assist a junk shop owner with the creation of her own personal E.G.G., you get a capsule for your efforts, but she’ll also show up during the ending to thank you again. The most amusing sidequest of all involves an old man named Clay, who challenges you to answer questions based on his insane ramblings. It’s hard to tell if his stories of adventure and how he met his wife are even real, and the questions are sometimes completely unrelated – better remember how to find the area of a triangle if you want the capsule prizes! 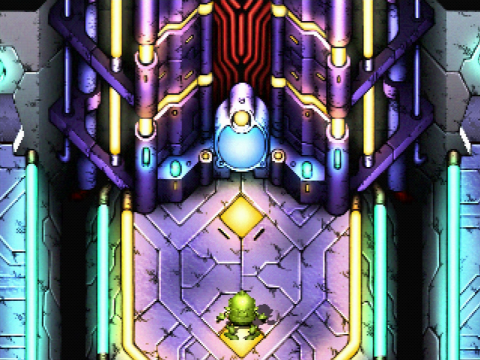 You’ll be spending a lot of time in dungeons, and their designs don’t disappoint. Dungeons are rife with enemies to defeat and puzzles to solve, with many of the later puzzles being a challenge of both problem solving skills and reflexes. Some of the challenges you’ll face include moving through closing gates fast enough, freezing water to get across in time, pushing blocks to clear a path, and walking along a color coded floor in the correct order. Dungeons are long affairs and labyrinthine in nature, but are loaded with shortcuts, treasure, and interconnected paths, making it worthwhile to explore every room even with your somewhat slow movement speed.  The variety of foes you face isn’t as substantial, with a lot of them just being other types of unmanned E.G.G. robots.

When it comes time to fight a boss, the game will shift to a 3D perspective. All of your abilities carry over to 3D seamlessly and some will even have different effects. For example, the ice beam doesn’t freeze bosses like it does weaker foes, but it can sometimes slow them down, preventing them from blocking all of your attacks. Boss fights can be rather long as well, so learning to recognize patterns and knowing when to spin offensively or defensively are important skills to master. The most standout boss of all is the Armordress Spacy, a giant robot that you get to fight in space with your very own giant robot, resulting in a fast and flashy mecha fight similar to something like Virtual On or Wartech: Senko no Ronde. Dying never sends you far back, but it’s needlessly punishing and evokes memories of the original Metroid, in that you’ll be left with most of your health missing with no way to easily heal up before you try a boss again. 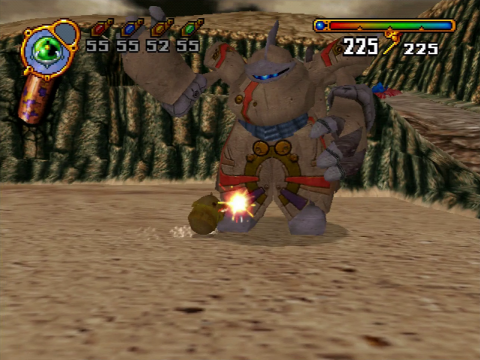 Much like the visuals, the soundtrack for the game is exceptional all throughout. The music consistently evokes feelings of both melancholy and adventurous spirit and many tracks are unique to the locations they appear in. The song that plays in Eastokion is a low-key piece that really establishes the town as a humble place of respite where the people of Tokion are just trying to make ends meet in any way they can. A small settlement to the north employs an ominous, almost strange track that makes you feel as if something bad is going to happen at any moment, which is fitting considering the shady characters that gather at the local bar. The theme that plays when exploring the overworld drives you forward with a consistent rhythm while also sounding contemplative and somewhat sad in nature, a mixture that harkens all the way back to the original Dragon Quest. The game’s music tends to be softer in most areas, with many dungeons having a similarly ambient track playing, but the tempo becomes far more exciting when fighting bosses and the transition when it does so always stands out.

It’s a shame that Birthday is no longer active in game development because they were really onto something with Elemental Gimmick Gear. It’s unfortunately expensive to acquire nowadays and it has yet to and likely never will be ported to modern consoles, making it difficult for many people to experience. Despite some inconveniences and rough edges, like its poor translation and lack of ways to easily restock on resources, it’s a hidden gem in every sense and feels like a game that simply wouldn’t be made today. Hand-drawn graphics are a rarity today, and not many mainstream releases in the present day are willing to enforce unguided exploration and experimentation the way this game does. Elemental Gimmick Gear is creative, ambitious, and weird in a way that’s synonymous with the Dreamcast itself and is a great way to rediscover Sega’s swan song of a console.